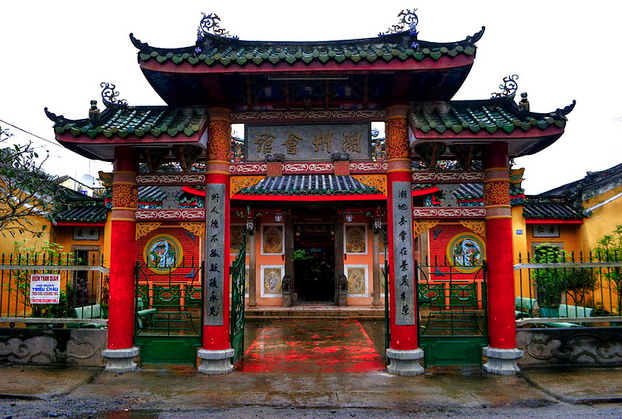 If you’re ever in South-East Asia, make sure you go to Vietnam. And if you’re ever in Vietnam, make sure you go to Hoi An. It is, quite simply, the coolest little town in South-East Asia. And yes, I realise what a grandiose statement that is, but trust me – after four months in Thailand, Cambodia, Vietnam and Indonesia, Hoi An is the place I most want to return to. As in, if you gave me a ticket I’d leave this afternoon (anyone want to take me up on that?)

Let’s start with the tailors, because why else would you go to Hoi An if not for the tailors? They’re all the guidebooks talk about, and they’re an integral part of the town. Quite simply, Hoi An is home to some of the best tailors in Vietnam, a country known for its dressmaking skills. Take in a pattern, an item of clothing you want copied or even a photograph of something you want made, and these magicians will whip it up in (wait for it) a manner of hours. Yes, you read that right. I had a wool coat with silk lining, perfectly fitted to me, made in an afternoon. It almost defies belief. (The price is close to disbelief, too – only $45 when I was there a year ago). The tailor side of Hoi An can be a little overwhelming when you first arrive, because there are so many options to choose from, but trust me: you want to go to Dong Duong Tailors, at 115 Tran Phu, Hoi An. Tel: 0510 (3) 910021. I wrote that down because we went to a few, and these were the only ones who provided a really quality product with a minimum of harassment – a rare treat!

The ambience in Hoi An is simply unlike anywhere else I’ve been. The centre of the town is a national heritage zone, so there are no motorized vehicles allowed – no cars, no motorbikes (almost unheard of in Vietnam!) and if you ride your bicycle you have to push it. So it’s a pedestrian zone, cobble-stoned, lined with charming little shops and cafés, lit with lanterns and loaded with history. They have a special history tour where you can see not only museums but worship halls and vintage musical performances. And once a month, on full moon, they have something called Hoi An Legendary Night, where all the lights are switched off and the streets are lit by candle light, with performers and musicians filling the streets with song… It sounds wonderful – one more good reason for me to return!

And lastly, there’s the food. The food all over Vietnam was very special, but in Hoi An we discovered Blue Dragon – 46 Bach Dang St, Hoi An. Tel: 0510 (3) 910 742. Great food, great prices, right on the riverfront, and it supports a local streetchildren project – www.bdcf.org
So what are you waiting for? Book your ticket to Vietnam, and spend at least three days longer than you think you need in Hoi An. I guarantee you won’t regret it.