The garden city lives up to its moniker from the moment you alight at Changi International Airport. Changi has won World’s Best Airport 28 times for good reason- they actually succeed in making you feel refreshed and happy in an open, light-filled space. Singaporean locals visit the airport even when they don’t have a flight to catch! Airports can often be claustrophobic spaces where time distends and you exist in a weird sleep deprived half-reality. On a layover in Changi you won’t even feel like you’re in an airport. Have a go on the exhilarating indoor slide, take a dip in the swimming pool or head out on a free city tour of vibrant, electric Singapore.

Go on a FREE Tour of Singapore 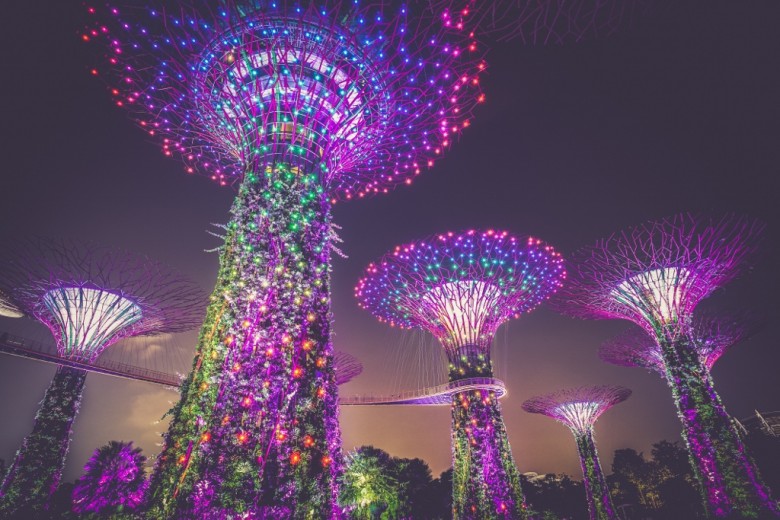 Courtesy of Mike Enerio via Unsplash

What do you need to join the tour?

All you need is at least a 5.5 hour stopover for the Heritage tour and 6 hours for the City Lights tour, your passport, your boarding passes and a valid entry visa. South Africans can enter Singapore 30 days visa free

Become a startrooper at Changi Airport 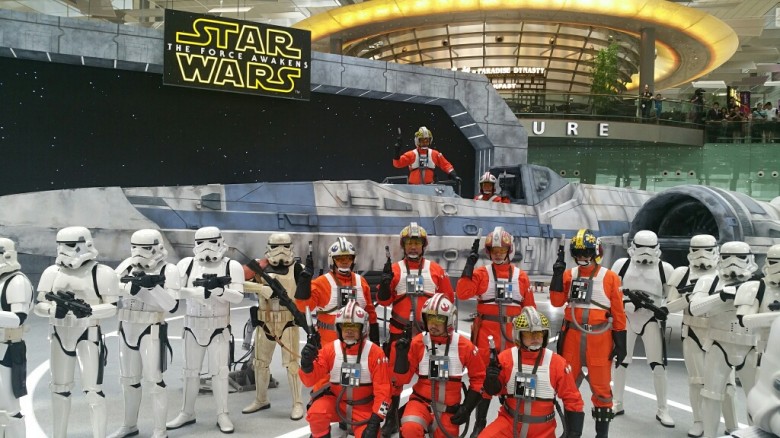 Visitors to the airport can dress in Star Wars costumes and snap some pics in the cockpit. X-wing fighter pilots and Imperial Stormtroopers will also make be making an appearance every Saturday at 4pm.
You can also learn popular Star Wars phrases in 10 commonly-spoken languages from a droid C-3PO.

There’s so much to do and transport is easy, just hop on the Skytrain between terminals: 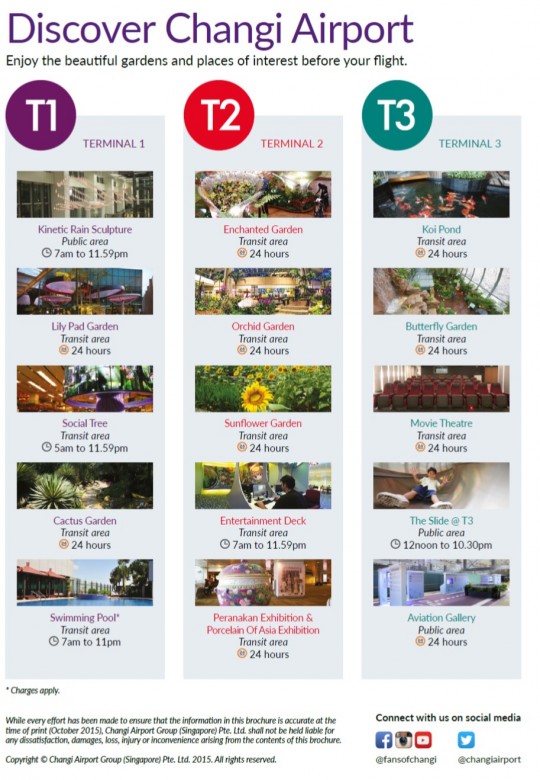 Which Airlines fly to which terminal? 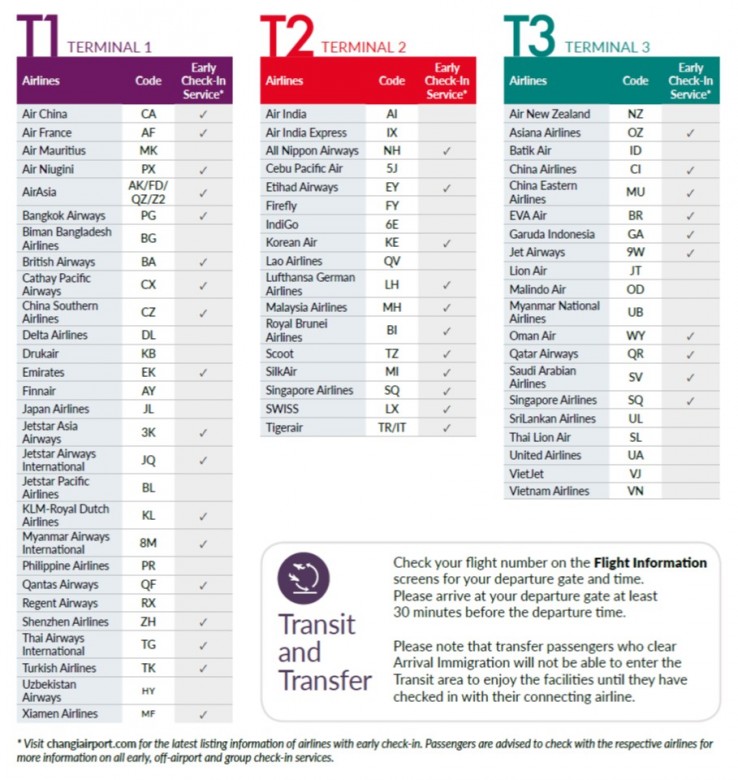 Get some fresh air in the Sky Garden 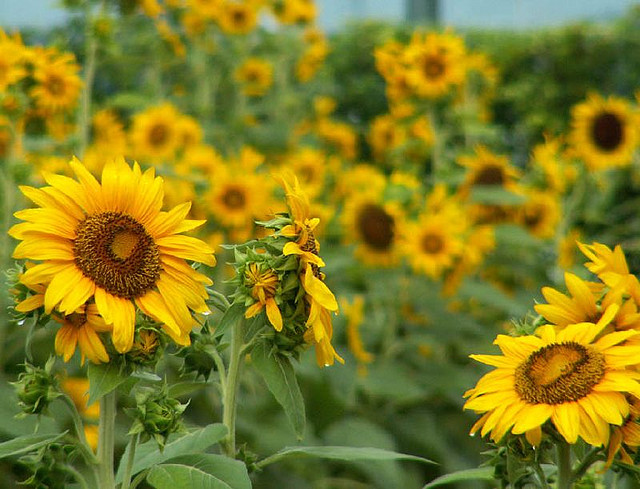 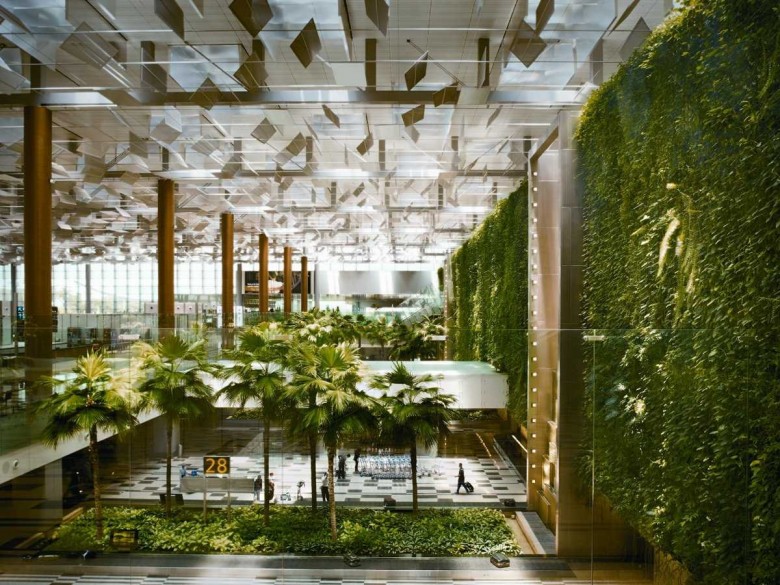 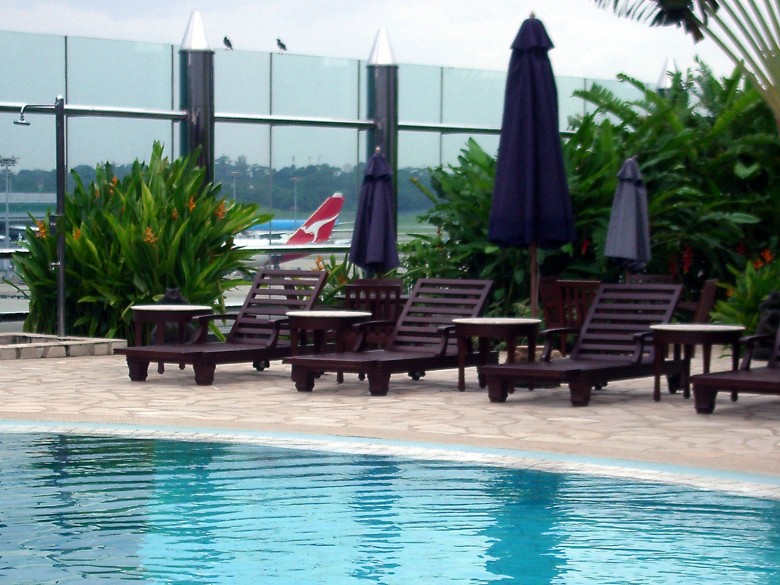 Catch your breath in the butterfly garden in Terminal 3 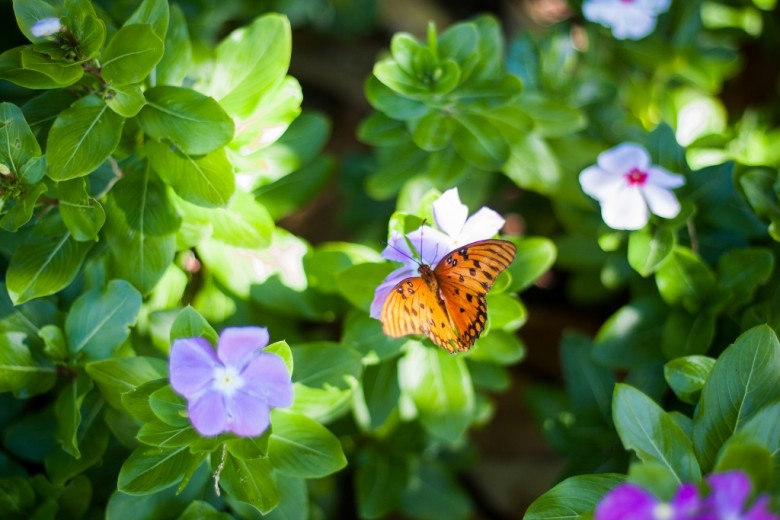 Courtesy of Ryan Jacques via Unsplash

Project Jewel is scheduled to be completed by the end of 2018. 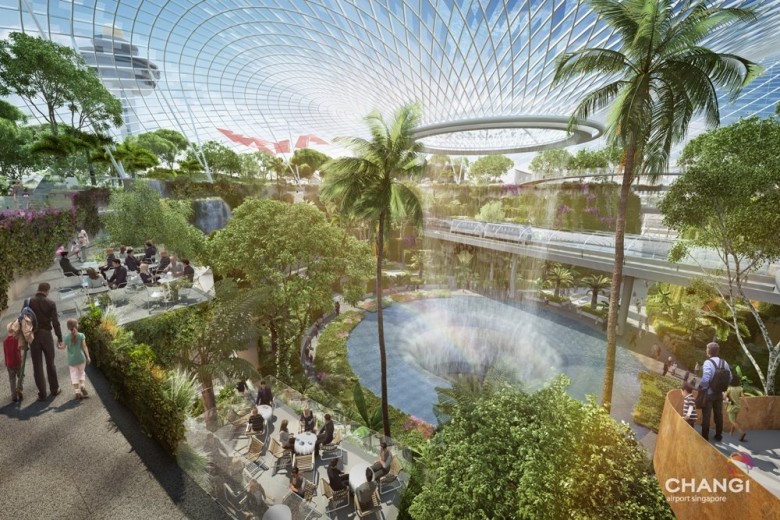 This £726million terminal is in the process of being constructed next to the existing Terminal 1. Project jewel includes the world’s tallest indoor waterfall. It’ll have five storeys above ground and five below ground. In addition to this Terminal 1 will have increased capacity to 24 million passengers a year. 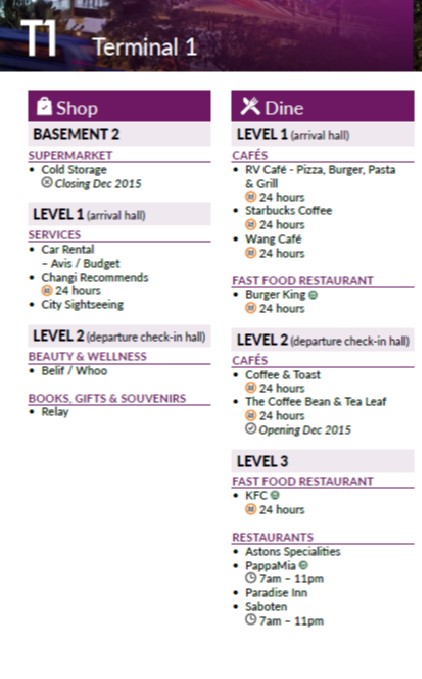 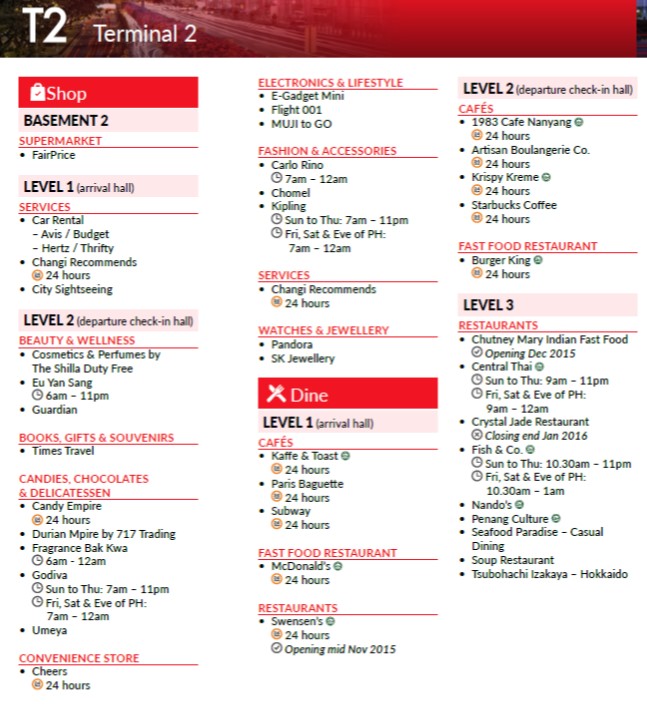 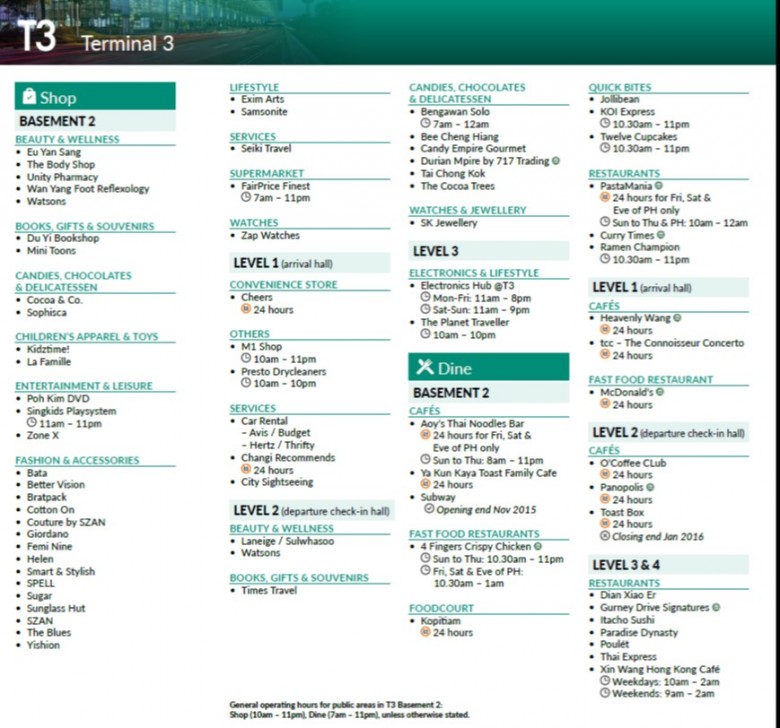 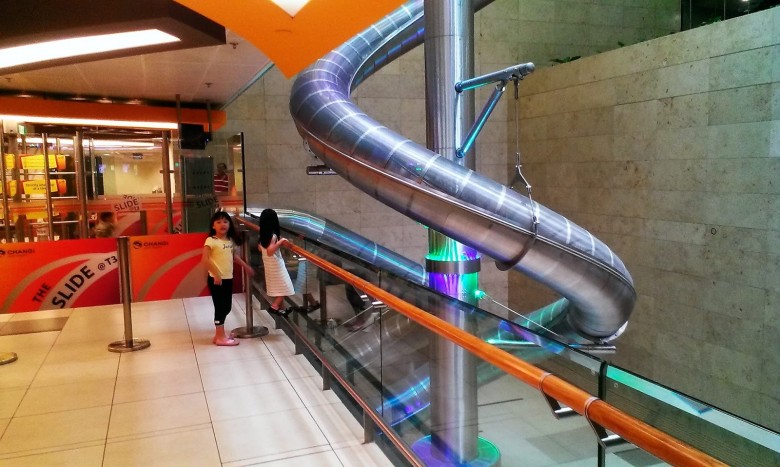 Courtesy of With kids we go blog

Please note the slide is being renovated til 29 November.

Register for a free Changi Kids Pass and activate it by spending S$50 nett in a single receipt at the Public Area, you’ll get complimentary movie passes and travel organisers, while stocks last as well as invitations to: 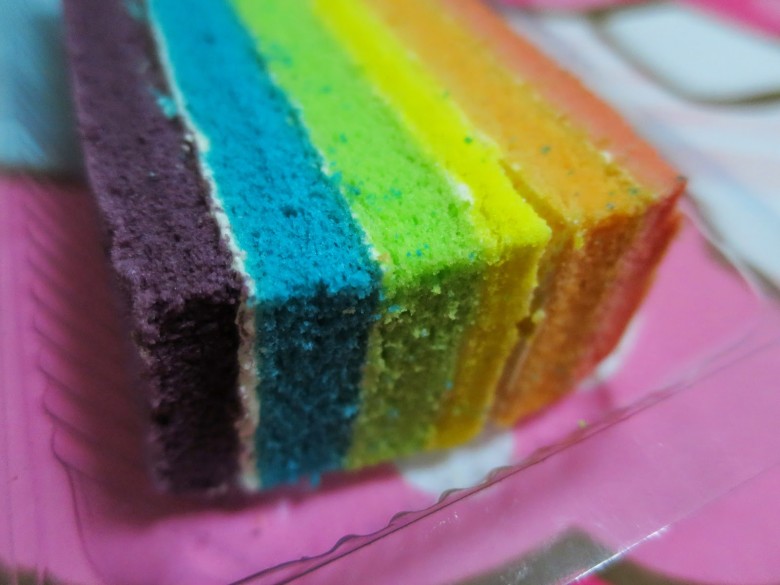 This popular Singaporean dessert is an instagram-worthy taste sensation. Find it in terminal 3 and stock up on more traditional desserts at Bengawan Sawan also located in terminal 3.

Sip a Singapore Sling at the Long Bar by Raffles 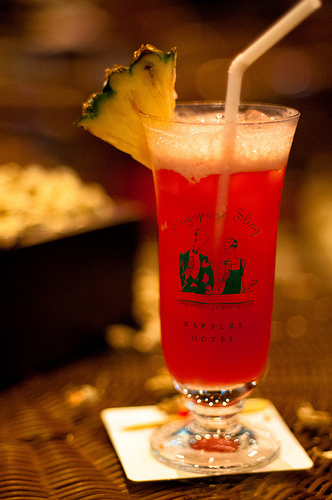 If you’re not able to leave the airport to sip one of Raffles Hotel’s infamous Singapore Slings, at least you can visit the Raffles Long Bar located in a new wines and spirits flagship duplex store in terminal 3.

Changi Airport has thought of everything. You’ll find small security boxes next to charging stations where you can leave your phone safely plugged in without being stuck in that particular spot.

Get a Free foot massage

Sharing the little comforts of travel with the passengers we love. #I❤️Changi | #ChangiAirport #cinemagram #cinemagraph

Don’t worry everyone is required to leave their socks on…

Watch the pattern on the carpeting- when it changes you know you’ve entered a different terminal. It’s not just the big things that sets Changi Airport apart. They’ve created a space welcoming space which is so much more than a holding space from A to B.

Travel often, for the world is at your fingertips. #I❤️Changi #ChangiAirport | : @dougkhoo A photo posted by Singapore Changi Airport (SIN) (@changiairport) on Oct 30, 2015 at 9:36pm PDT

The sun may shine after the rain but our captivating Kinetic Rain glitters all year round. #KineticRain #I❤️Changi | : @nazleong

You may not find a pot of gold at the end of the rainbow, but a lovely sweet treat awaits! #ChangiYummy #Panapolis | : @themartycastro A photo posted by Singapore Changi Airport (SIN) (@changiairport) on Oct 9, 2015 at 2:38am PDT

Drop by the Raffles Long Bar the next time you fly, for a #SingaporeSling cocktail on the house! #WinesAndSpirits #Terminal3 #I❤️Changi | @dfsofficial : @floraisabelle A photo posted by Singapore Changi Airport (SIN) (@changiairport) on Aug 5, 2015 at 5:47am PDT

Kick start your weekend with a walk in the park. If you happen to be on transit at #ChangiAirport, be sure to check out our #SunflowerGarden! | Photo Credit: @itsmeu -R

Planning a trip to this island city? Get cheap flights here.