The action of being brought together again as a unified whole.

A rather appropriate name for an island that speaks of unity, of a gathering of people, the bringing together of friends. One that is home to a proud Creole people.

Approaching Saint Denis Airport, my window seat offers a view of the island as it pushes up from the endless blue waters. It looks small, yet determined. The landing strip runs along the edge of the coastline and the pilot delivers a smooth arrival to a planeload of excited people. Many holiday makers, some business, two of us here with a very specific purpose. To experience the annual Festival Liberté Métisse.

Personally, I’m beyond excited to come into contact with this brand new destination.

To offer some bearings, Reunion Island is in the Indian Ocean off the coast of Africa, with Madagascar its closest neighbour. A Department of France, the island falls under French rule with the citizens holding mainland residency. They refer fondly to the Metropol when talking about France, as though it were just up the road and not a continent away. French is spoken, the Euro is used. The food is good too.

Reunion Island also forms parts of the Vanilla Island collective, an alliance that promotes Madagascar, the Seychelles, Mauritius, Mayotte, Comoros and the Maldives as a region; one that encourages a focus on the environment, as well as responsible and sustainable tourism. And yes, they may have much in common with their neighbours, yet here on Reunion Island it feels different. More authentic. This island first and foremost belongs to its proud and relaxed people. This is the uniqueness and focus.

I am here for the weekend as a guest of Reunion Island Tourism to experience and learn as much as possible about their Festival of Freedom or Festival Liberté Métisse, which has been hosted for the past five years on the Etang Salé les Bains Beach in celebration of the abolition of slavery. The Festival offers expos, concerts, craft and most importantly, music! 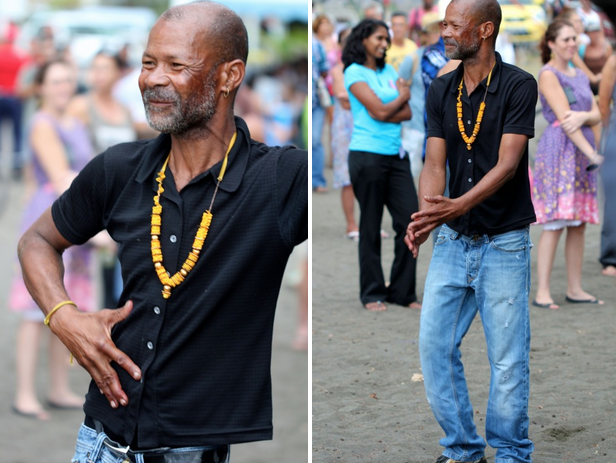 Officially opened by the President of the Vanilla Islands, the Renegade percussion group instantly brings life to the proceedings. The audience start to bop to the beat and I follow their lead, clapping and cheering along. Over the next two days the three stages on the beach host various dance acts and musicians. The crowds come and go, some settling in, sarongs and picnics on the black lava sand, others passing through, taking to the rhythm as they do, usually with a stranger. But then again, on an island with a population of only 850 000, there is no such thing as a stranger. There is even live graffiti going up as I watch. 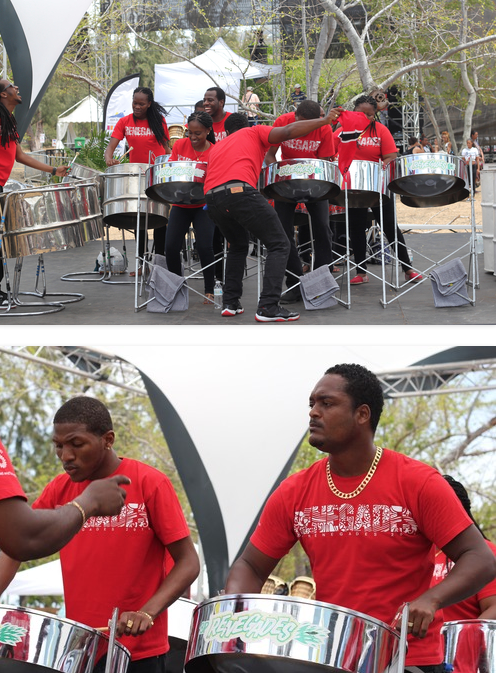 Looking at the word Creole with special reference to Reunion I learn that the island was largely unpopulated until the late 17th century and had no indigenous language. Then people from France and Madagascar, as well as East African slaves started arriving. Slavery was officially abolished on 20 December 1848 and labourers were brought from India and China to work on the farms.

The result? A linguistic melting-pot, with French dominating and Malagasy, Tamil, Portuguese and Hindi all influencing the development of the Réunion Creole people and language. The name Creole actually comes from criollo in Spanish and crioulo in Portuguese, words used in the 16th and 17th centuries in colonies to describe those born and raised locally as opposed to those who immigrated as adults. My guide Philippe points out that even though there is a strong French linguistic influence, he doesn’t understand when the language is spoken in its purest form.

’We are Creole’. I’m told. ‘Not Irish or African or Chinese. We are the Creole of Reunion.’

This was very evident as we were invited to join Danyèl Waro, legendary Creole musician, poet and activist, at his home Kabaro. A highlight of my Festival Liberté Métisse experience. Danyèl Waro personifies warmth. He welcomed us with open arms, kisses to the cheeks and a heartfelt invitation to join the vibrant dancing. The rain ran down his face and the humidity fogged up his glasses, but nothing could dampen the energy or pride that shone from this man, who is known as the Creole King of Maloya.

Maloya is the rhythmic music on which plantation workers have been singing their joys and woes since the days of Isle de Bourbon. Today the focus has shifted from the political voice of slaves to a message of peace and hope for the environment. The modest home in his sugarcane fields high up above Saint-Paul, is where children are hosted by him on overnight camps, taught how to grow vegetables, where their food comes from, the importance of healthy eating and about the preservation of the ocean. Also why the world is worth fighting for.

His songs border on poetry. He speaks of love, death and hope, using the voice of the Creole people, keeping their tradition alive. Waro makes sure through expressive beauty and words, that the language is not forgotten. ‘I defend freedom of expression, the seeking out of truth, our culture and proud heritage’ – and the Réunionese listen. As did I.

In the rain, mud underfoot, more accurately mud everywhere, the mood was light, animated, passion filled. With a complete sense of abandon that the uniting mixed freedom festival celebrates. 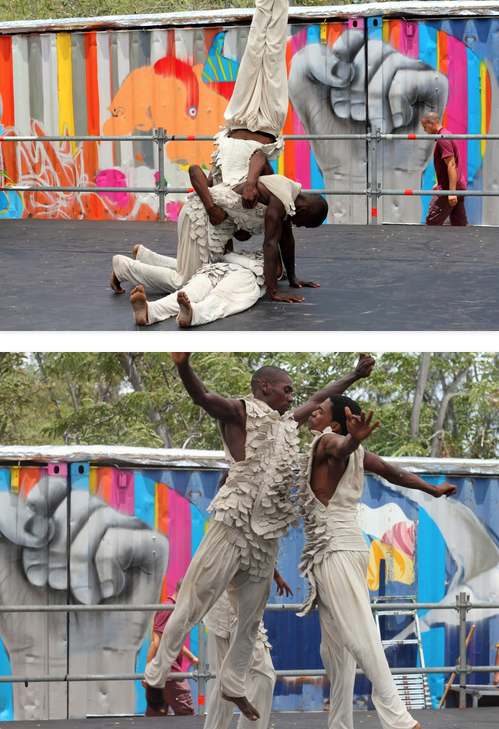 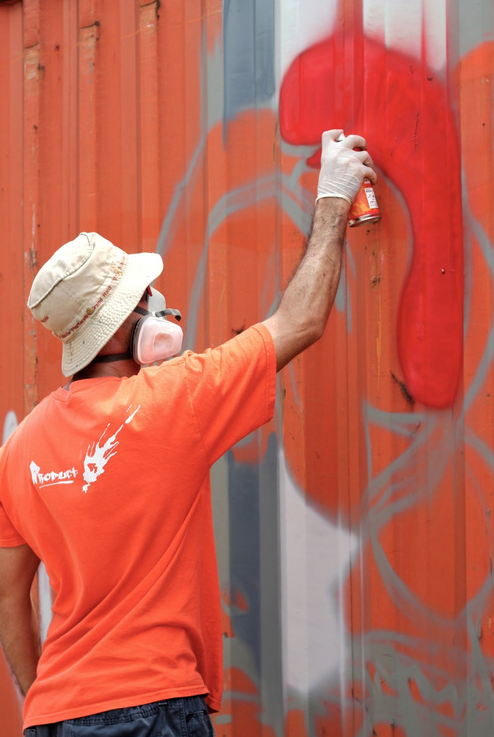 Street Artists bring their art to life as we watch, at the Festival. 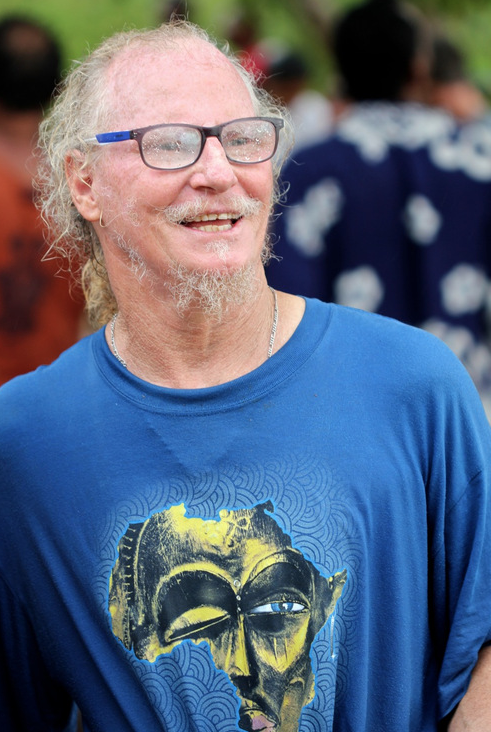 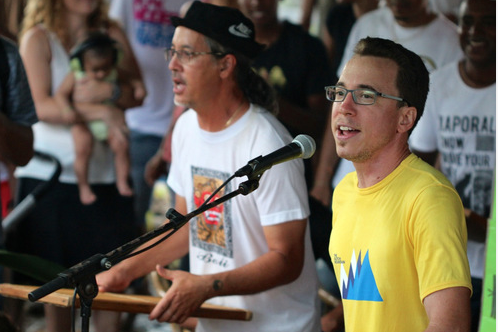 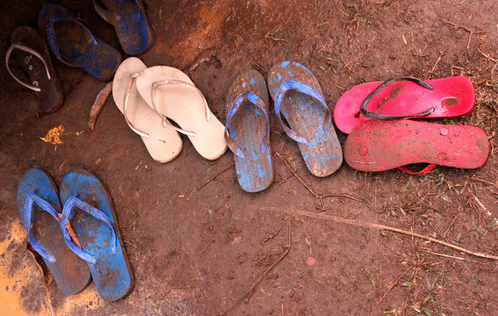 The rain never dampened the spirit, shoes were kicked off and dancing was free, barefoot in the mud. 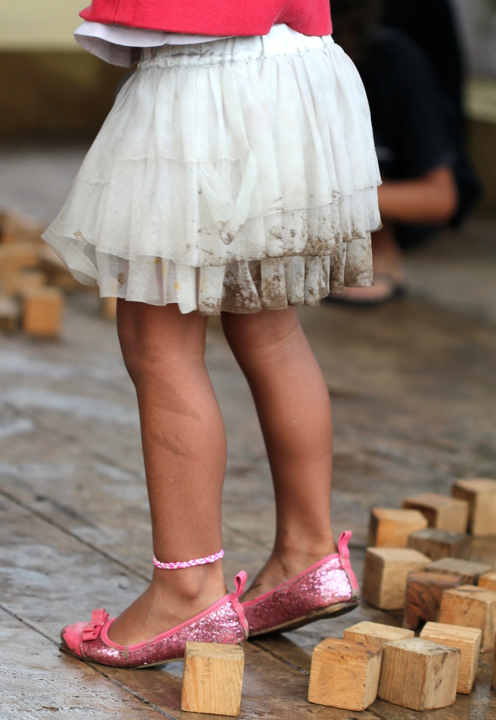 While the parents danced to the music the children played, some on their tippy toes.

There are many reasons to go to Reunion, but the Festival is certainly one of them if you’d like a full cultural immerser.

Actually the Etang Salé les Bains Beach has a character of its own too. Palm trees line the coast and the water laps gently in the area offered for protected swimming. The sand under foot is volcanic black, and burns as you walk down to the shore. This thanks to the active volcano which occasionally erupts to add to the bulk of land. It erupted as recently as Janauary 2015. Also that in its big eruption of 2007, the island actually gained 3,5 ha. Not a bad thing say the La Reunion residents, who refer to it as ‘their volcano’ with pride not fear. Although typically there are legends of devils and dares that surround it.

From the air during our helicopter flight with Coral Hélicoptéres, I get a better idea of what they mean. There’s nothing quite like an aerial perspective and that is particularly true of Reunion. As we take off my French pilot offers detail of the areas that we are flying over. I see the change of landscape and for the first time grasp the diversity of offerings for which this destination is renowned.

We fly over fruit trees and farmland, over scatterings of homes on hill tops, some only accessible by foot. Lush green crevices with cascading waterfalls, which we career past, the pilot lifting the joystick at the last moment, playing with us and the wonders of nature. Further teasing as we are taken to the barren black and grey of the volcano and her craters. I catch a glimpse of some hikers, the red on their jackets breaking their cover. What an activity to do.

I don’t want the flight to end. I haven’t understood a word, yet the whir of the overhead propeller, the view through the front window and speed at which we are flying through the air excites me. The last stretch is over the lagoon. White beaches, calm blue water, yachts and boats. I’m delighted as I catch sight of two leatherback turtles playing in the water below.

Back on solid ground, we head to the Saint Pierre Market to replenish on local offerings and do some shopping. Everybody loves a good market, especially one that is bursting with fresh fruit and veg, local specialty cuisine, crafted goods, woven baskets, photography, jewellery and hand produced clothing. Money was spent, litchis and annanas eaten, chats were had. My kind of shopping experience. It’s right on the coastline too, with a skate park next door.

The list of activities on offer is endless with forty percent of its 2500 km2 territory classified as World Heritage Site by UNESCO, many hiking trails, beaches, lakes and rivers with all their varied water sports including scuba diving. Paragliding, kayaking, canyoning.

Also take the time to meet some of the Artisan producers, including the Vanilla Co-Operative, Noute Kafé for hand ground and roasted coffee and the Maison de Geranium distillery. They make their island proud.

The weather is hot and very humid. Especially after the gentle rain which seems to come at night in the rainy season. A welcome thing, that enhances the vibrancy of the colours and flavours. Petite in size, grand in character. Here lives the good life and I was very happy to have this introduction to it. 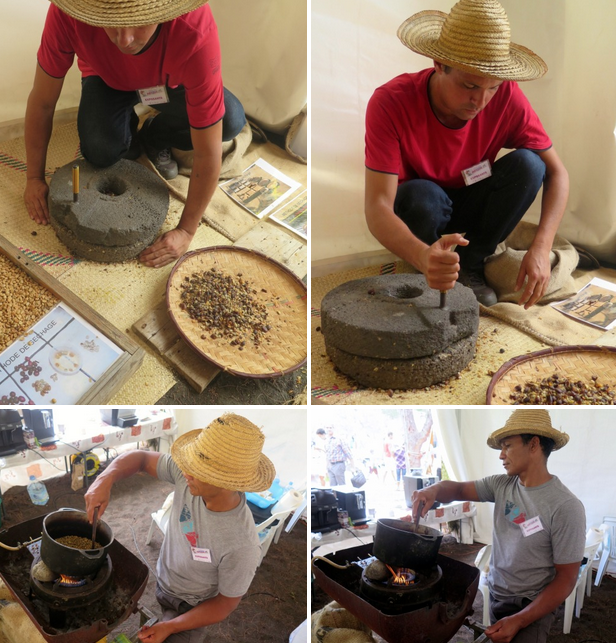 The Artisan producers of the island.

The video that I made of the festival, the movement and dance, to a song by the great Danyel Waro.