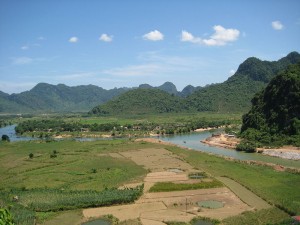 How could it be that the world’s largest cave was not discovered until………2009!?

Well, it wasn’t really first discovered in 2009. As the story goes, back in 1991 a local man named Hồ-Khanh discovered this remarkable cave deep within a forested national park in central Vietnam. In 2009 he would help guide a group of British scientists to the site, where they soon discovered that the Son Doong Cave was in fact the world’s largest, five times larger than Vietnam’s largest cave, the Phong Nha, and even bigger than the Deer Cave in Malaysia, at the time considered the world’s largest.

So how big is the Son Doong cave? It’s biggest chamber is over 5km long, 200 metres high and 50
metres wide. In other words, only one skyscraper in South Africa would be taller (The Carlton Centre).

The Son Doong Cave is located within the Phong Nha-Ke Bang National Park, located in central
Vietnam about 500km south of Hanoi. The park was listed as a UNESCO World Heritage site in 2003, yet it
has actually been a popular tourist attraction in the country since the 1920s. Even before the discovery of the Son Doong Cave, the Phong Nha park held several world cave records, such as the longest underground river and largest caverns and passageways

The core region of the Phong Nha-Ke Bang National Park is nearly 100,000 hectares, 96% of which is covered in forest. It is home to an impressive total of 568 vertebrate species, comprising 302 birds, 113 mammals, 81 reptiles, and 72 fish. Popular activities in the park include expeditions of caves and grottos by boat, ecotourism exploring the flora and fauna, along with mountain climbing and trekking. Several popular waterfalls also exist throughout the park, along with one of the most impressive karst landscape in all of Asia.

The Son Doong Cave is not open for tourists to explore at this time. Yet the rest of the many remarkable attractions within the Phong Nha-Ke Bang National Park await your next visit to Vietnam.