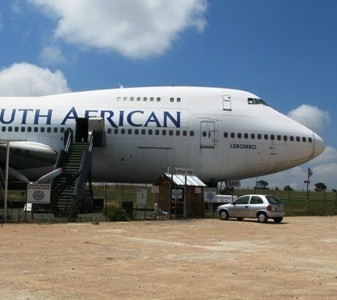 If you love aircraft, especially historic birds, then take a drive out to Rand Airport in Germiston to the SAA Museum Society on a Saturday or Sunday morning.

There are plenty of cool places in Jo’burg to go plane spotting, the most obvious being OR Tambo International in Boksburg. Sure, the viewing deck’s advantageous, but you’re quite restricted in the types of planes you’re likely to see on the apron.

Rather, travel southeast to the Transvaal Aviation Club where the SAA Museum Society is based. For just R25 for adults, and R15 for kids under 12, you can walk beneath the belly of a Boeing 747 beast, and peek into First Class.

The SAA Museum Society is a bunch of passionate pilots and aviation anoraks committed to “preserving the history of South African Airways as well as that of general civil aviation in South Africa.”

The museum is independent of the national airline, and staffed by volunteers who restore and conserve the historic aircraft donated to them.

Owing to the historic value of the aircraft, it’s not possible to board any of the planes, except Lebombo, the Boeing 747-244B.

Now retired, this is the aircraft that flew over Ellis Park Stadium at the Rugby World Cup final between South Africa and New Zealand with Good Luck Bokke emblazoned beneath her wings, in 1995.

The only complaint that I (and everybody else in the visitor’s book) had, is that there’s no access to the flight deck. You’ll have to settle for the flight simulator next door where some of the scenes of the rugby-flick Invictus were filmed.

Do visit the small but interesting indoor museum, full of historic photos, and mementos of civil aviation in South Africa, before it closes at 14h00.

Next to the museum, Biggles is a ramshackle, but casual, and friendly restaurant and bar.

The booze is cheap and the food is simple and fresh – just ask the constant stream of locals that come to sit outdoors, watch the planes, let the kids play on the grass, and enjoy a meal here.

In an hour or so, while we munched a fry-up, we saw 2 P-166S Albatros growl their way skyward for a casual flip, a tiger moth, a Sukhoi  stunt plane, coloured smoke streaming behind him as he made a couple of low passes above the airfield, helicopters, Cessnas, and we could see jets in the distance coming in to land.

Skip OR Tambo’s over-full parking, the traffic jams, the crowds of passengers, and the predictable franchise restaurants. A day out at the SAA Museum is affordable fun – plane and simple.