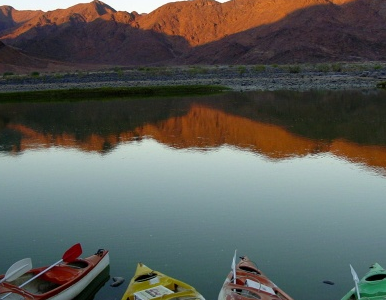 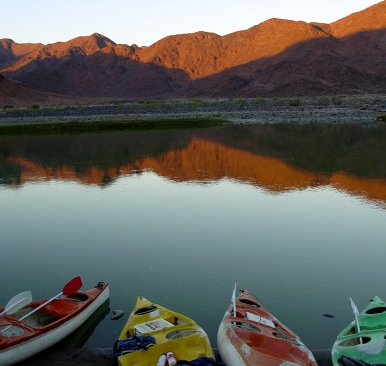 If you’re looking for an adventure with a capital A, then this just might be the holiday for you… There are loads of different companies that offer a 4 day rafting trip on the mighty Orange River, but we went with Felix Unite and it was a fantastic choice – not only because they offer the best food on the river (even though they do – more on that later!) but because they’ve been around for more than 20 years and are totally sussed when it comes to shepherding city slickers down a river and out the other side.

But I’m getting ahead of myself! Let’s start at the very beginning…
We arrived at the Felix Unite base camp (complete with a sparkling swimming pool, poolside bar looking over the river and shady campsite) after a long 8 hours in the car, and an even longer 2 hours at the Namibian border post. Apparently it’s only at New Year and Easter that the border gets so jammed – we were lucky in comparison to some of the other people on our trip, who had to sit in the baking Namibian sun for 5 hours before they got through border control! The lesson? Leave Cape Town at 5.30am or break the trip into two and overnight along the way.

After a delicious dinner we spent a night under the stars, woke early and headed off on our adventure. Essentially, the Orange River trip is 75km of paddling in canoes (or inflatable rafts, but Felix Unite uses canoes and they are better, trust me). 75km over 4 days might not sound like a lot, but when it’s 40 degrees and you’re in the sun it can seem pretty far… That said, we didn’t spend too long paddling each day – at most until 3.30pm, and one day only until noon!

The river is delightfully varied – long straight stretches that are so still you can hop overboard for a cooling swim and hop back on without having moved very far; deep stretches of fast moving water where you have to be on the alert for hidden rocks; and the rapids. The rapids are by far the most fun, but also the most challenging and most likely to end in capsize! I’m happy to report that we didn’t capsize at all, but that’s solely because I had a fantastic paddling partner and listened to what he said. Seriously.

Apart from the paddling itself, the trip is enormous fun because you get to hang out in the river playing all manner of pool games (in the biggest pool ever) and laze around in any shade you can create on the banks, and sleep under a million stars, and eat superb food (somehow they managed to whip up roast lamb, homemade crumpets and roast chicken, amongst many other treats, with nothing more than a campfire and a pan!)

If you’re looking for a holiday that takes you off the beaten track, out of your comfort zone and into a whole different definition of fun, paddling on the Orange River comes highly recommended!