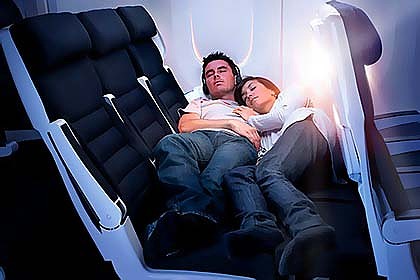 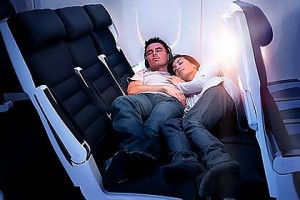 Flying comfortably in Economy Class has just become so much easier. This week two of Air New Zealand’s  newly refitted Boeing 777-300 equipped with the much discussed Skycouch seats were finally deliverd to the Kiwi airline. It will not be much longer now till Air New Zealand will start flying those planes and the Skycouch seats will be available to book for travel agents and consumers. These seats that are located in NZ’s economy cabin are what I call a comfy way of flying in cattle class without the enormous price tag. And this is how it all works. If you’re flying with your spouse, boyfriend or girlfriend or whoever else you would like to cuddle up to, you can buy two economy class seats at the normal fare and a third seat in the same row for half the price. If it is still empty of course. If you’re feeling sleepy (or frisky) you can then move the foot- and armrests and convert the three seats into a comfy bed so you can both lie down next to each other. And voila! Let the fun begin. I mean: Let the counting of the sheep begin! There are 22 seats spread out over 11 rows in the front of the economy cabin. The two planes will start flying on the Auckland to London route via Los Angeles and the rest of the fleet will soon be refitted aswell. Air New Zealand is a carrier that has always been somewhat of a groundbreaker in the airline world and rumor has it that there are 30 other airlines dying to copy the new Skycouch seat. Well, bring it on! Because it’s never ever very comfortable on a plane, right? Seatbelts imbedded in all kinds of limbs, armrests that are in the way, feet stuck in footrests. And sleeping ain’t easy either! I just hope that Air New Zealand is preparing itself to host a whole score of new members of the Mile High Club! Because, let’s face it, these seats aren’t unoffically called ‘Cuddle Class Seats’ for nothing!