Johan Wiklund is in the process of flying a De Havilland DH-60 Moth from North Cape (Honningsvåg in Norway) to the Cape of Good Hope. The Swedish pilot is following in the footsteps of Swedish aviator Gösta Andrée who completed a similar journey in 1929. Johan is no stranger to adventure having already crossed the Atlantic in a small sailing yacht. He set out on 2 July this month and he will land in Cape Town on the 24 October at 15:10 local time, exactly 86 years after Gösta Andrée completed his journey.

“Flying was a very tangible freedom. In those days, it was beauty, adventure, discovery – the epitome of breaking into new worlds.” Anne Lindbergh

Johan has 25 years experience as a pilot for SAS worldwide so naturally he believes good planning is key to the success of the journey. The difference between his route and that of his predecessor is that he is taking it up a notch by starting 1500 km further North at the North Cape in Norway, while Andrée began in Sweden. Both routes cross the Mediterranean and follow the Nile down to East Africa and onwards to the Mother City. Travelstart also hails from Sweden though we’re based in sunny South Africa, we’re a fan of warrior spirits and adventurers. Johan- we look forward to your arrival!

To help Johan on his history-making journey go here.

Well…what should I say! Northcape! Did it last year aswell but here is some evidence! A Cape is not that difficult. It is the getting there… #FR24 #flycapetocape #North cape #Cape of Good Hope

7 min from Honningsvåg to Nortcape today. Did several lowpasses outside the breathtaking cliff. I will publish more pictures later. Tomorrow another trip in afternoon and start of project Cape to Cape. Southbound on Monday morning! A photo posted by Johan Wiklund (@flycapetocape) on Jul 4, 2015 at 10:04am PDT

Outside Johannesburg SA 1929. Gösta Andrée to the right in his suit! 02 July starts a “Cape to Cape” flight in a similar airplane and suit. I will be the pilot… Soon links to FR24, FB, Twitter and blog…

I met the ambassador of Sudan in Stockholm today. Got his mobile number and instruction to “call me at any time if you need help”! Sudan is “go” for Cape to Cape!

Very proud over this! From last year in july 27. Sir Geoffrey De Havilland’s birthday. Parked at Honningsvåg and Nortcape cliffs in the background! Will be back in ca 3 weeks from now! A photo posted by Johan Wiklund (@flycapetocape) on Jun 16, 2015 at 1:35pm PDT

A map of the original route: 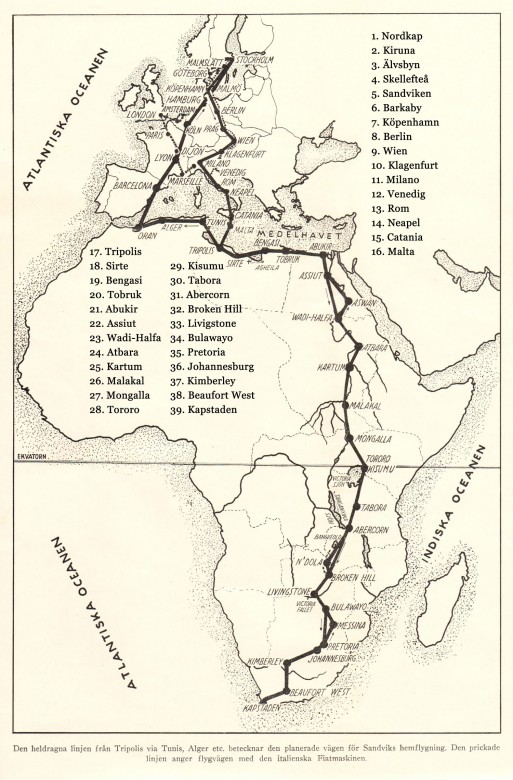