The Ellora caves complex in the Maharashtra state of Western India will leave you gaping in disbelief. It is the largest rock-cut monastery and temple cave complex in the world and dates back to 600 – 1000CE. 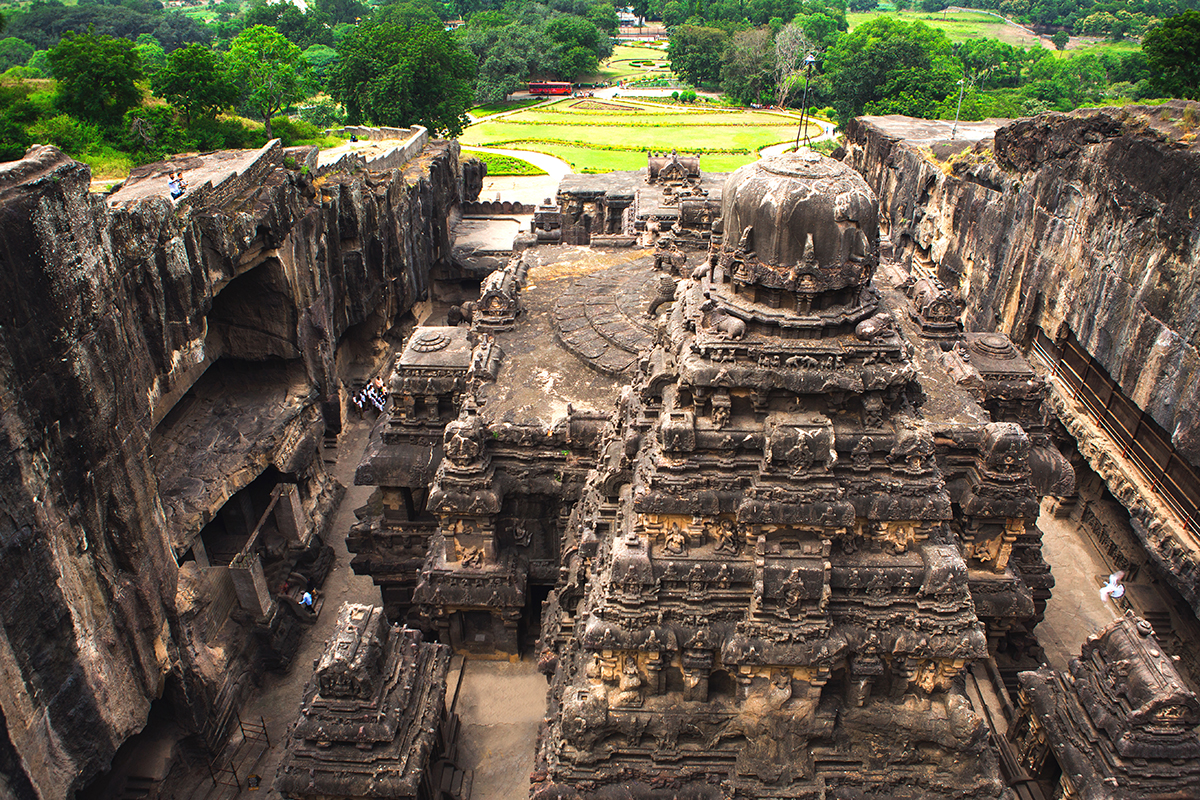 Declared as a UNESCO World Heritage site in 1983, this series of 34 monasteries and temples spanning over 2 km has been carved out of a single basalt cliff. The sheer amount of stone dug out by hand to create this masterpiece will leave you speechless. 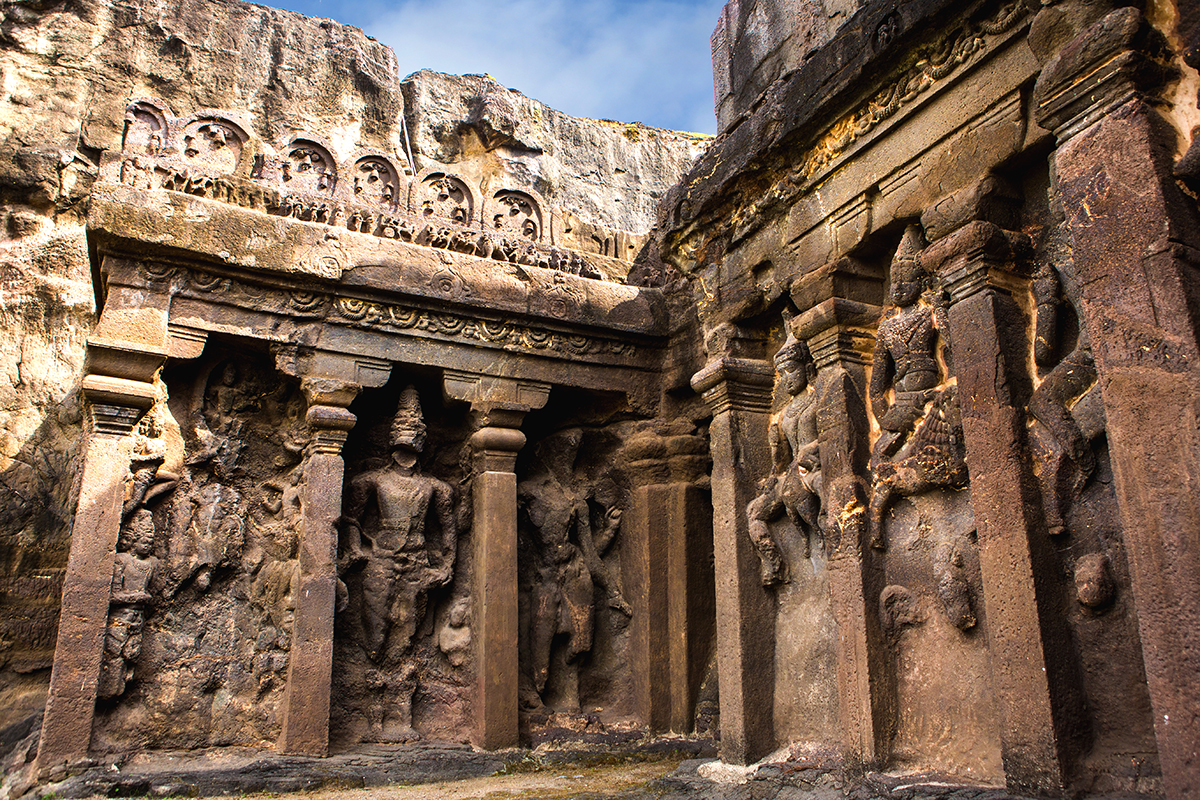 The elaborate facades, interior walls and intricate carvings bring the civilisation of ancient India back to life.

Buddhist, Hindu, and Jain devoted sanctuaries can be seen here, and reflect the religious sentiments of the people of that era.

“In an intolerable society as we know it today, this site provides an illustration of the spirit of tolerance that was characteristic of ancient India.”

The Hindu caves are the most dramatic in design, the Buddhist caves contain the simplest ornamentation while many of the Jain temples are two levels and have been left incomplete. 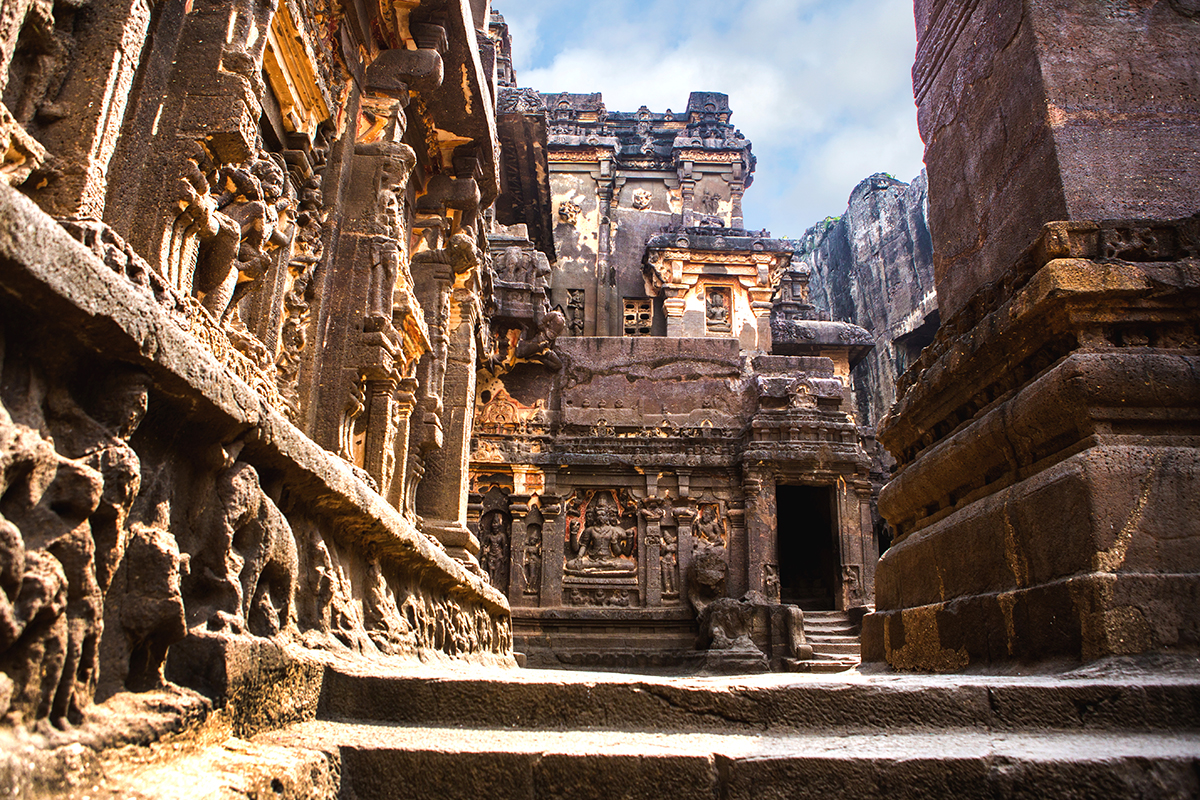 There are 17 Hindu temples in the centre of the complex dating back to 500 to 900 CE. Cave 16 is the epitome of all caves standing in an imposing manner just as you step inside the compound.

It is twice the surface area of the Pantheon in Athens and one and a half times as high. It carries the same construction mystery as the Egyptian Pyramids and England’s Stonehenge and will leave you fascinated.

Technically called a cave but conceptually a temple, the Kailasha is an exemplary artwork of monolithic single rock excavation. This type of architecture describes buildings which are carved, cast or excavated from a single piece of material, usually a rock. 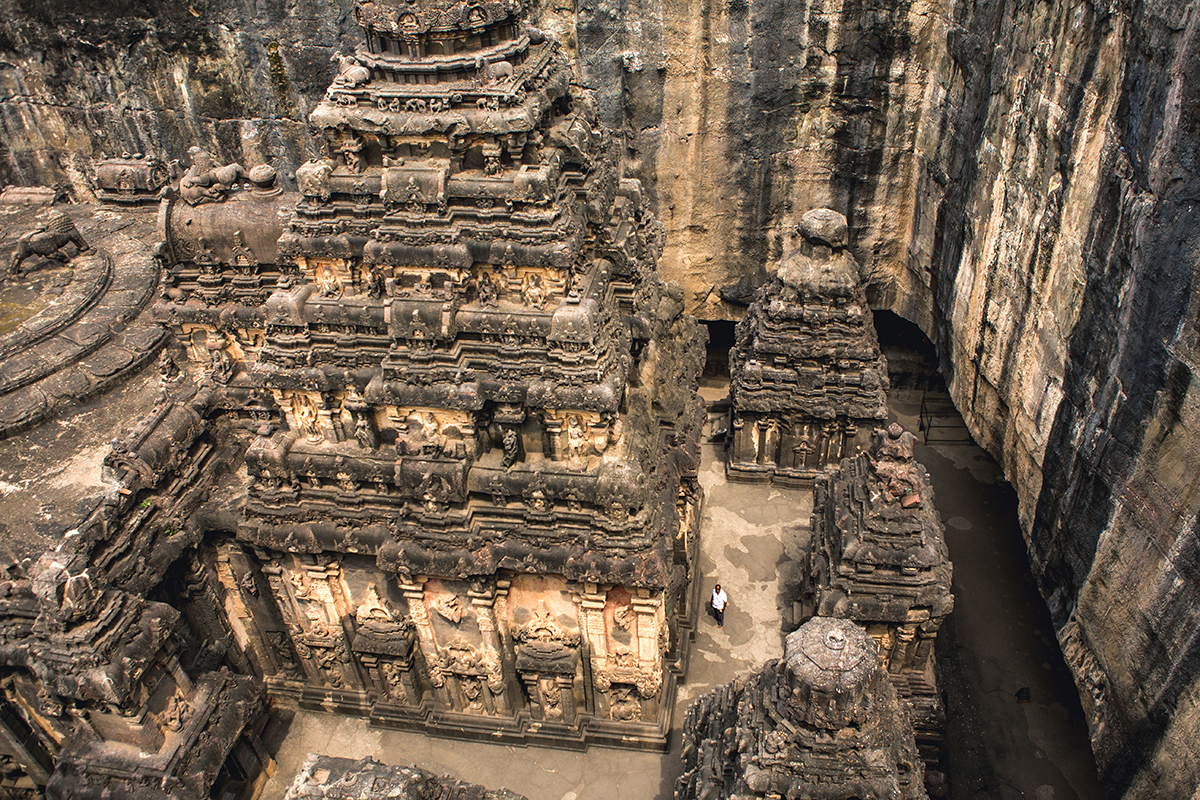 Cave 16 received its name from the Kailas mountain range of the Himalayas where the Hindu God Lord Shiva lived.

Unlike the other temples that are carved horizontally into the rock face, this one is said to be carved from the top all the way to the ground level.  Construction took place in the 8th century and involved the removal of 150 000 to 20 000 tons of solid rock.

What makes this truly remarkable is the fact that no machinery was used and this was done completely by hand with a hammer and a chisel. 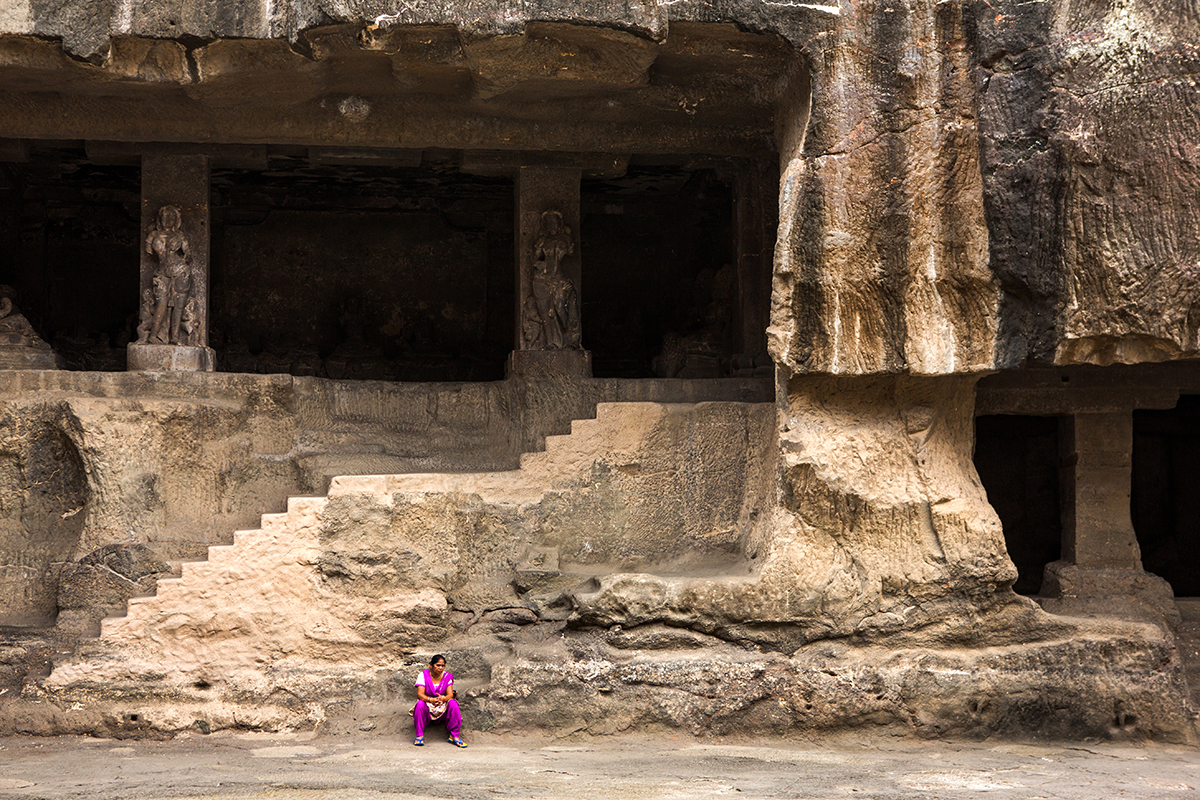 The complex is 50 metres long, 33 metres wide, and when you are standing on the cliff 30 metres above, you will notice the four levels. 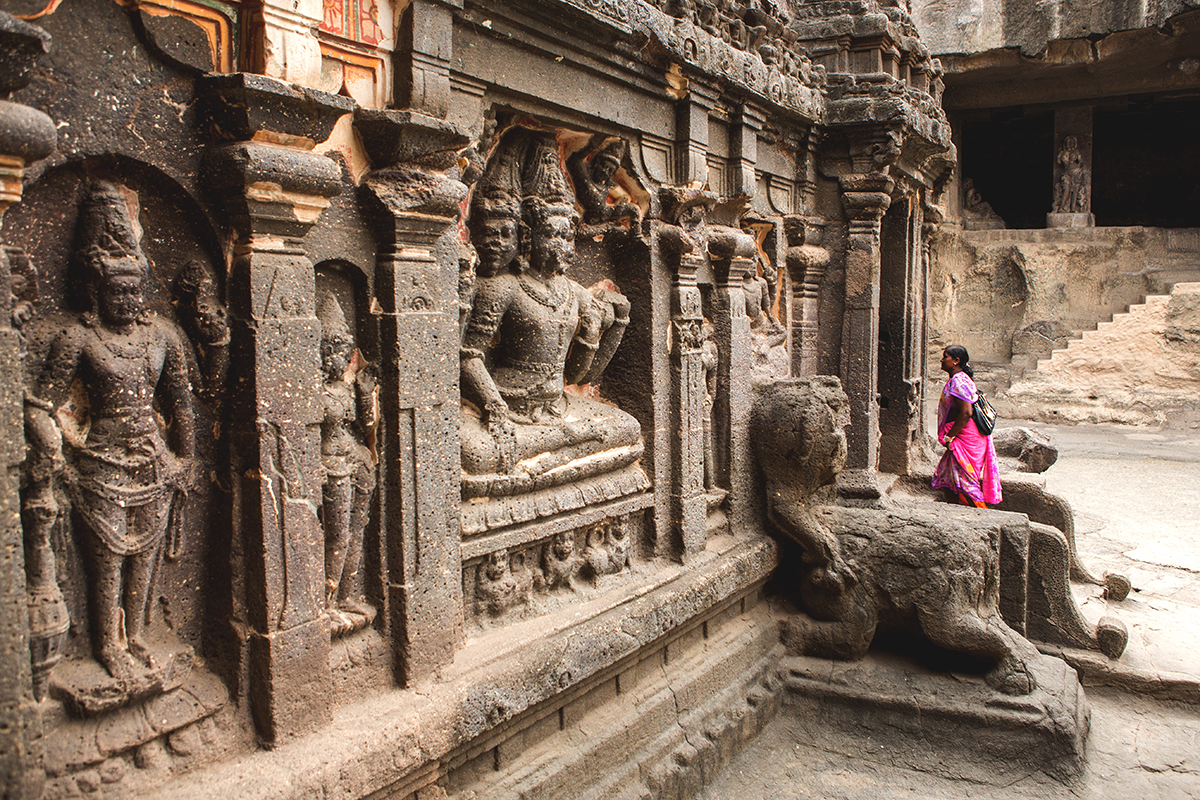 In the main courtyard you will notice a monument of Shiva’s bull Nandi standing on a porch, and along the walls, you will see a scene of Vishnu transformed into a man-lion battling a demon.

The central shrine housing the lingam features a flat-roofed mandapa supported by 16 pillars, and among the depictions within the halls is that of a 10-headed demon King shaking Kailasa mountain. 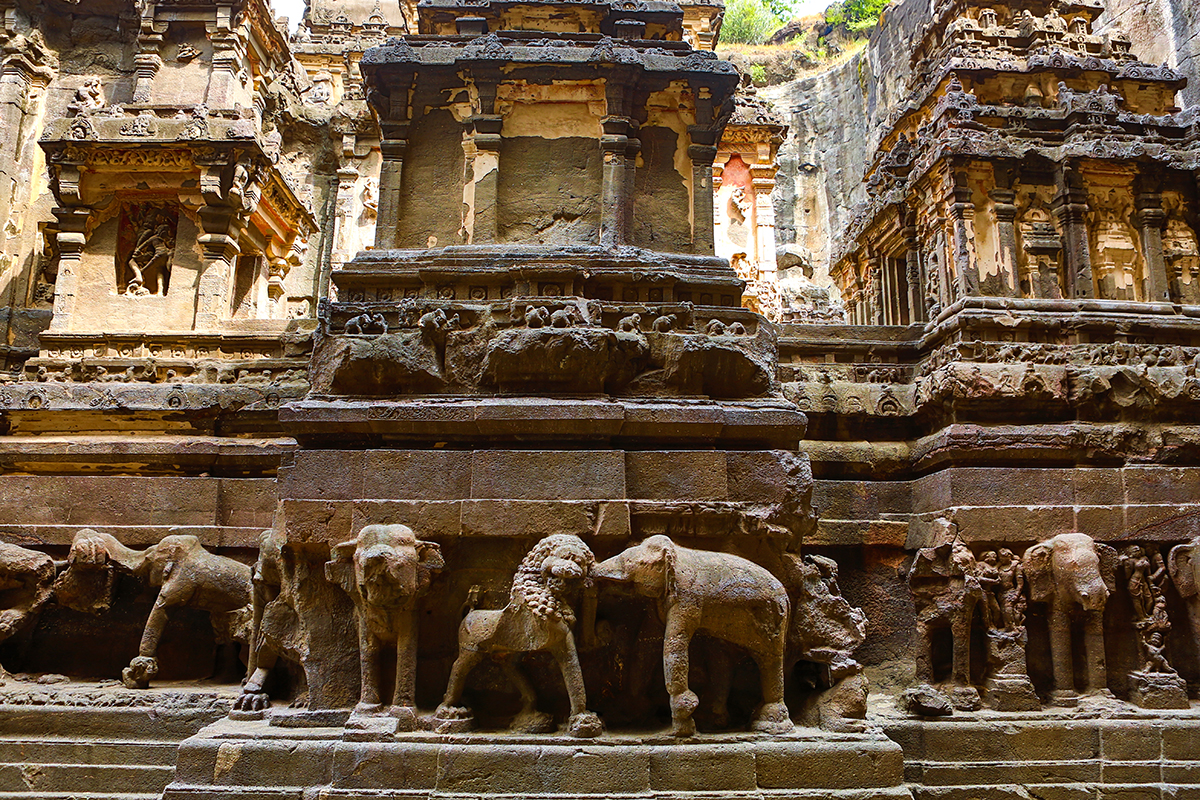 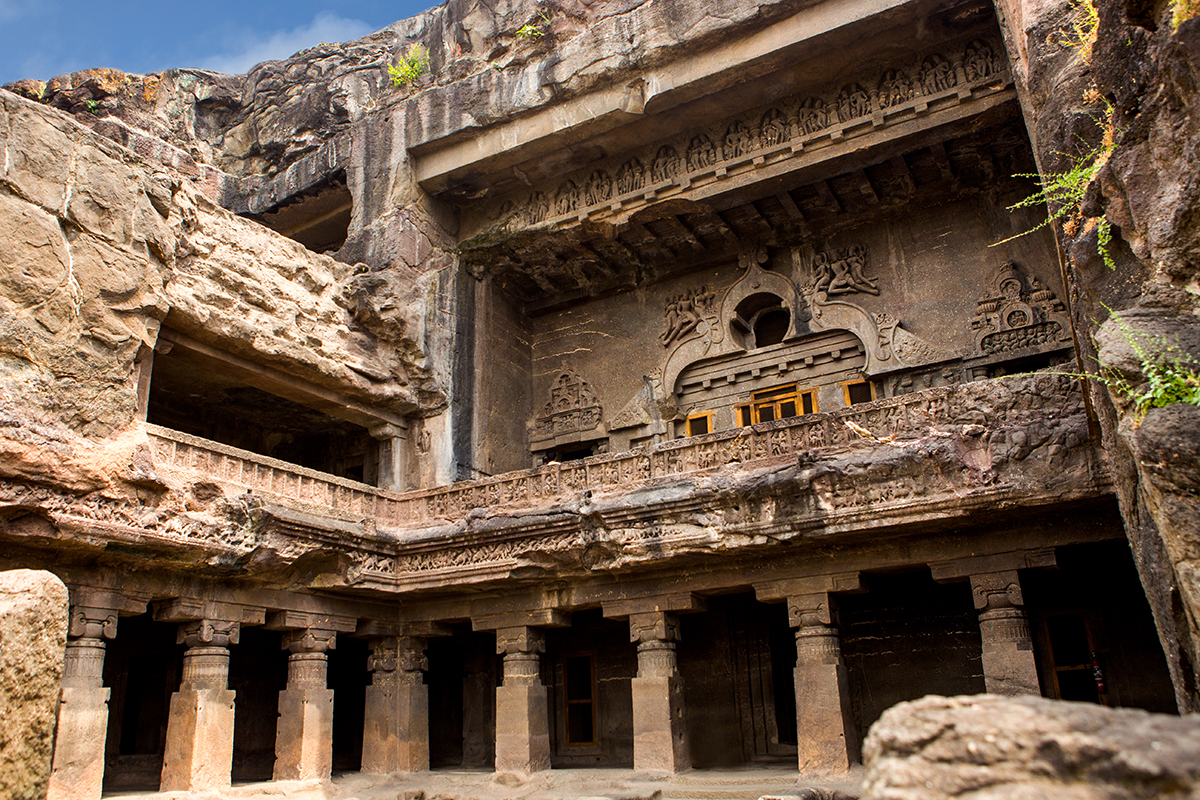 The oldest of the Ellora caves can be found on the southern side of the cliff and are of Buddhist origin. There are 12 caves each dating back to from 200 BCE – 600 CE.

Cave 5, 10 and 12 are architecturally important. Cave 5 has a unique hall with two parallel low benches in the centre making it the second only cave in India to be designed this way. 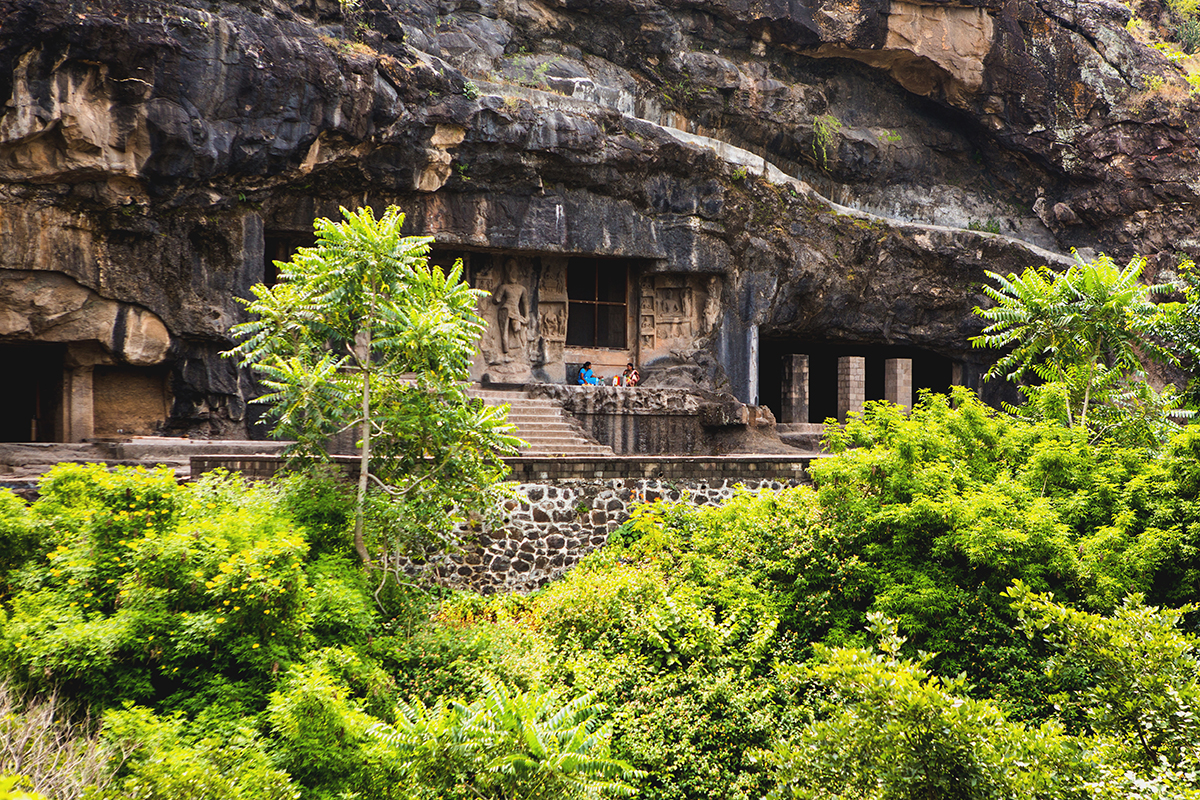 Cave 10 houses the main Buddhist prayer hall, and Caves 11 and 12 are three-storied caves which show their Vajrayana affiliation. It is said that these caves have been built entirely by human hands and looking at the caves, you will notice the immense skill and craftsmanship of the builders. 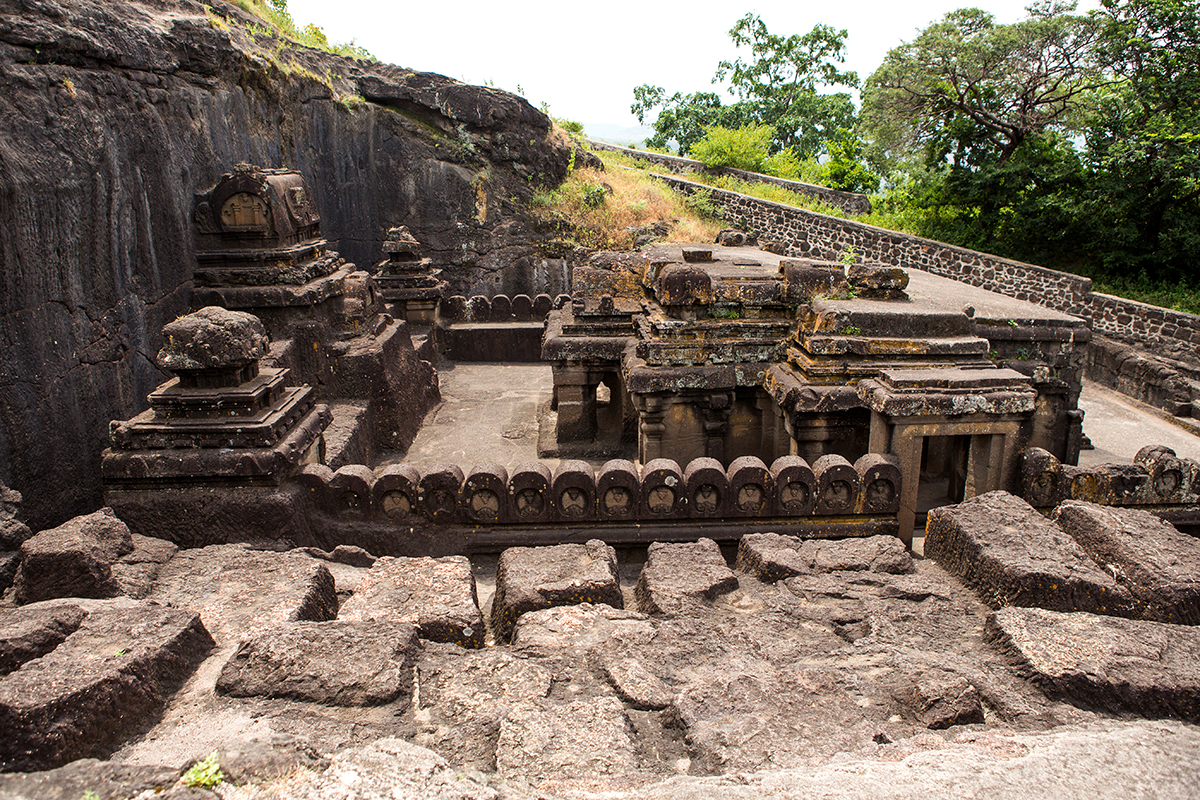 On the Northern side of the complex, you will find the 5 Jain temples, each from the Digambara sect of Jains and with a living tradition of around 700 years. Without modifications or inscriptions, however, the earliest phase of Jain cave temples is often difficult to date.

Cave 32 is particularly important as it shows the ascetic character of this religious group with its fine carvings of lotus flowers and other elaborate ornaments. It has two levels. The lower level is unfinished while the upper level is the most elaborately decorated cave in the group. It has beautiful pillars, large sculptural panels and paintings on the ceiling. 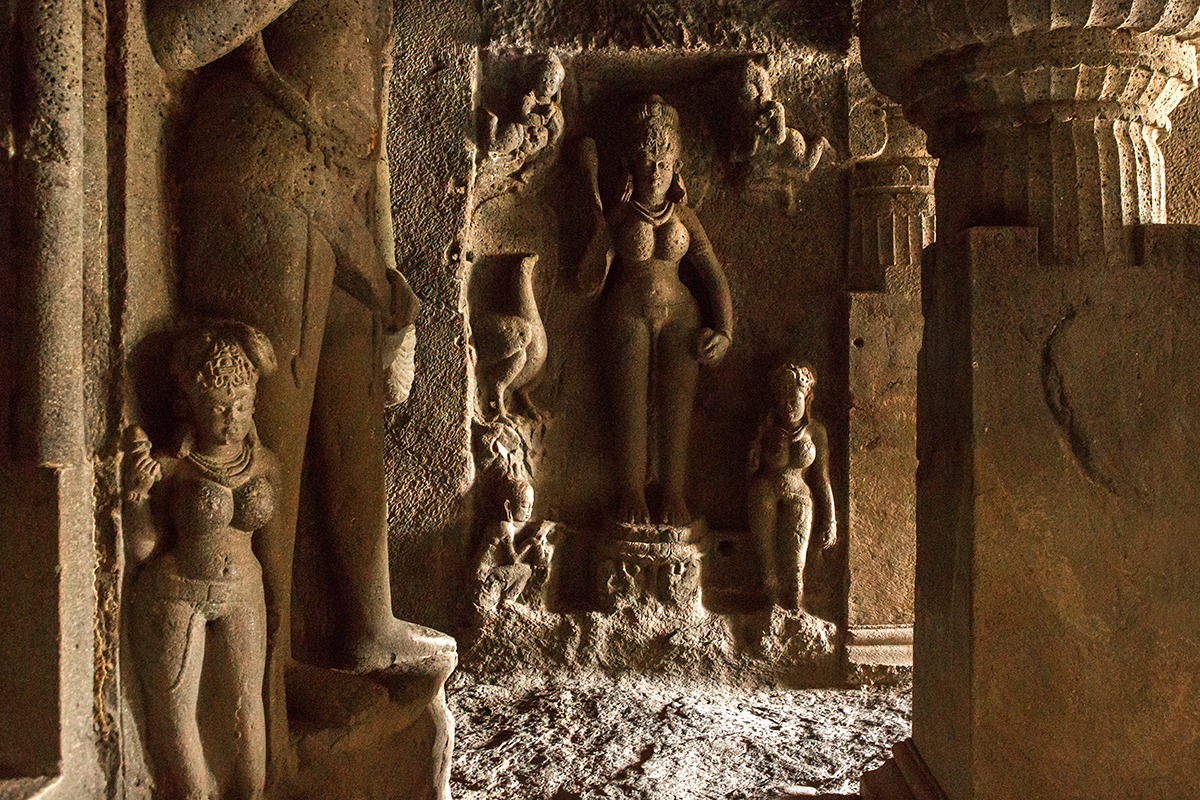 Ellora Caves. Image by: Chantelle Flores www.51countriesandcounting.comCave 30 is a very elaborate cave tucked away in the thicket of vegetation and is often overlooked by visitors. It is locally known as Chotā Kailāsa (“small Kailasa”) and has a similar monolithic structure as the Hindu Cave 16, except that it doesn’t have the elephant carvings or free-standing pillars. The cave is left unfinished from the outside, while only the interior along with the carvings is finished.

The best time to visit the caves is from November to March when it’s cooler and dry.

If you will be visiting in the third week of March be sure to check out The annual Ellora Festival of Classical Dance and Music. Experiencing such a magnificent performance on the backdrop of the 1,400-year old caves and rock carvings would be a lifetime experience.

The caves are open from sunrise until sunset (around 5.30 p.m.), daily except Tuesdays.

The Ellora caves can be reached by air and then by road. The closest airport to the Ellora Caves is located at a distance of 30kms in Aurangabad, which has good connectivity to the cities of Delhi, and Mumbai. Book your cheap flights to India now.

Using Aurangabad as a base, it’s most convenient to hire a car and drive to the cave complex. Book your cheap car hire in Aurangabad now. 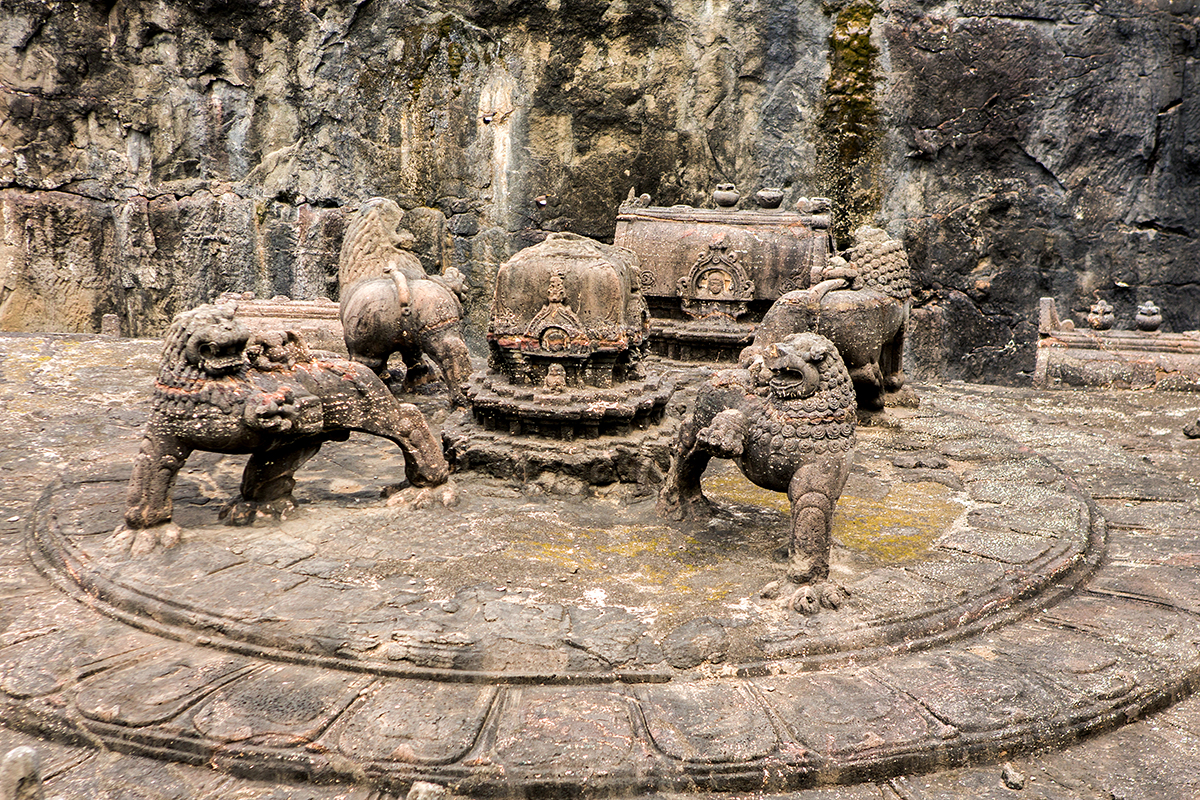 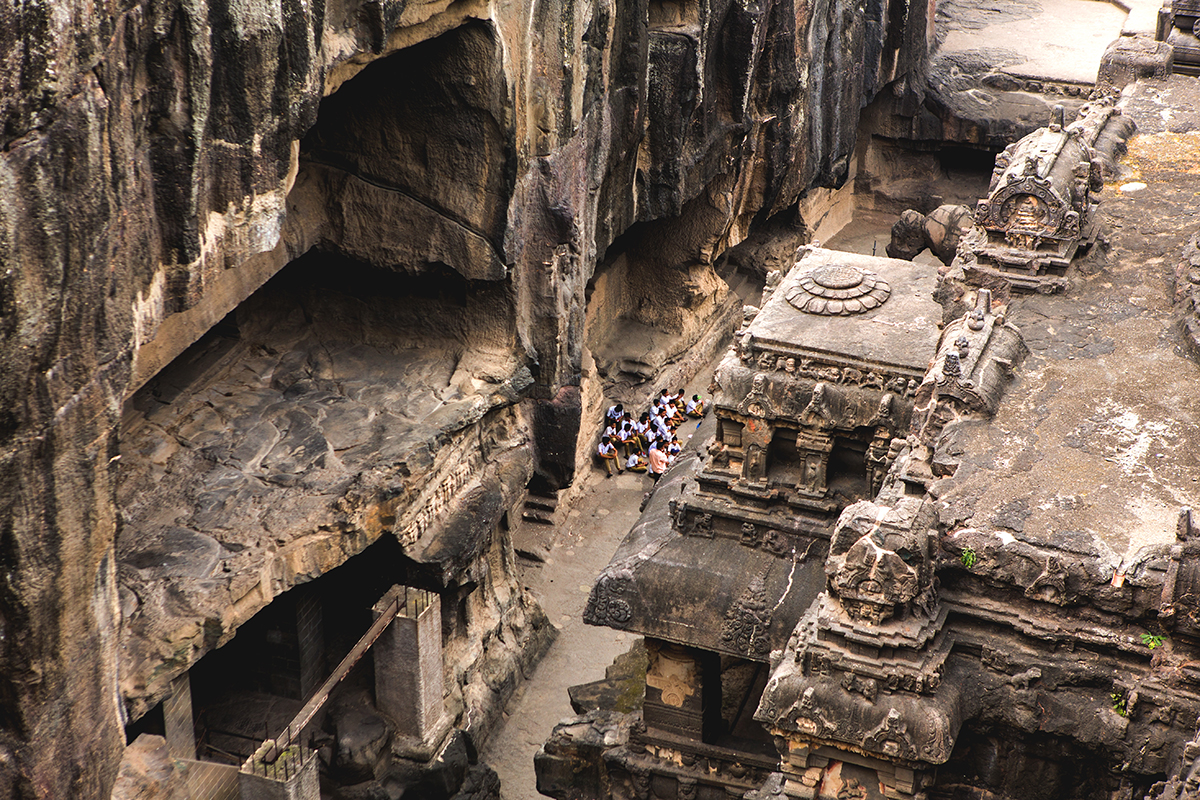