Lonely Planet named Ethiopia one of its must-see countries for 2017. And after a two-week visit to the capital and northern region, I soon understood why. It’s an easily accessible and affordable destination, with a strong coffee culture, that’s steeped in centuries-old traditions and consists of awe-inspiring landscapes. If I were a tourism trend analyst, I too would place Ethiopia on the top of my list for emerging African travel destinations. Here’s why. 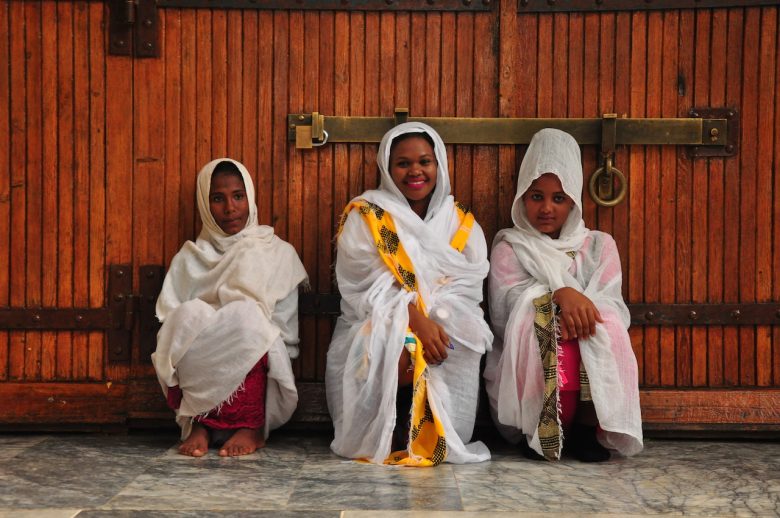 All photographs courtesy of Iga Motylska. 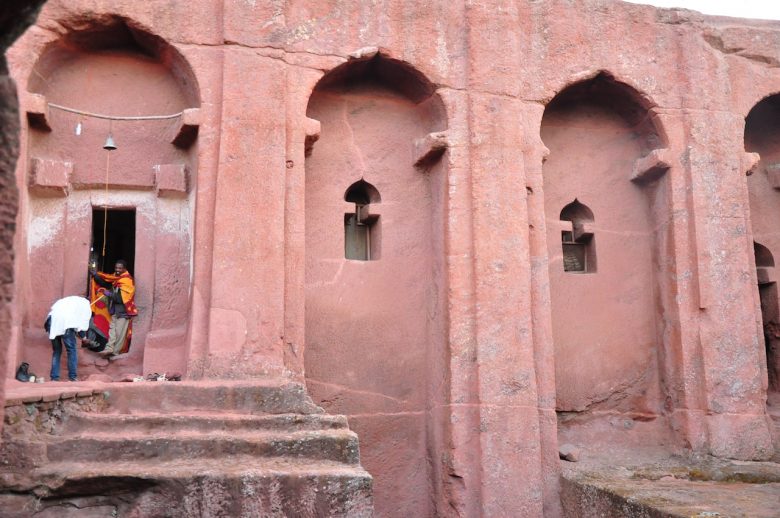 I’ve just walked through a serpentine passage and rocky entrance to behold before me St George’s Church. It is the most famous of the 11 rock-hewn churches and two chapels of the Lalibela church complex, which was painstakingly carved, along with its passages, out of red volcanic tuff over 23 years and 6 months. King Lalibela’s vision to establish a New Jerusalem in Africa – after Muslim conquests of the holy land prevented Christian pilgrimages – still stands tall, nine centuries later. 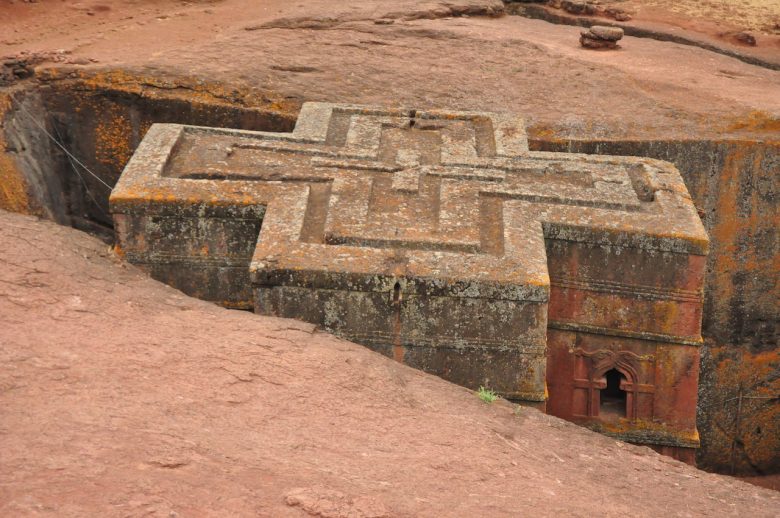 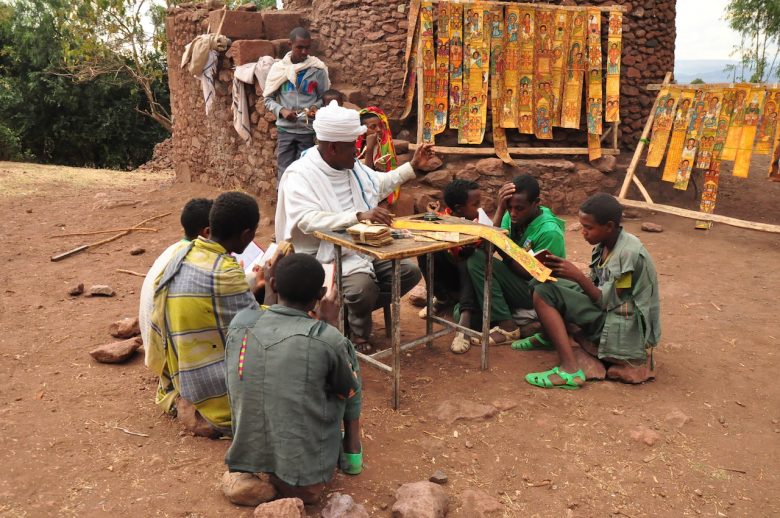 My white scarf slides off my hair as I gaze up at the free-standing monolith carved into the ground in the shape of a cross. Travellers and pious locals are silenced by its grandeur, by this feat of manpower and faith. Later melodic prayers and hymns take to the sky. 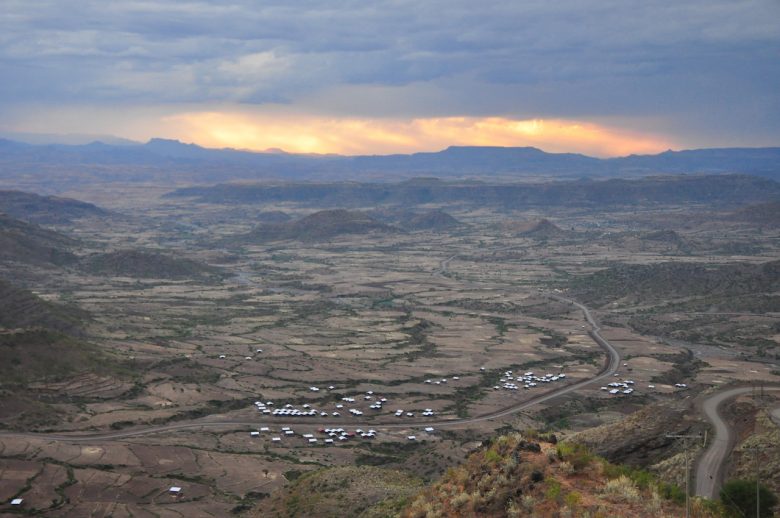 Though Lalibela is highly revered as an important religious and pilgrimage site, the kingdom of Aksum – which was founded more than 3 000 years ago and remains the oldest continually-inhabited city in sub-Saharan Africa – was one of the world’s first Christian countries, when the religion was adopted in fourth century. We zigzagged between the towering granite obelisks (23 and 25 metres high), ran our eyes over engraved tablets and entered into the depths of royal tombs at Aksum Stelae Park. 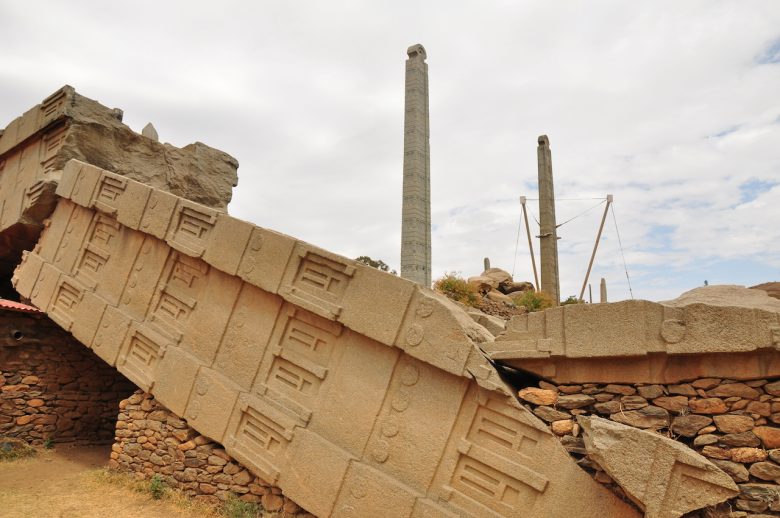 Just across the street is Ethiopia’s oldest church. The walls of the Cathedral of Mary of Zion are brightly painted with Bible scriptures. “That’s because many people were illiterate,” explains the priest who shows us around, “but they could understand the paintings.” Both sites are free to enter, though the Chapel of the Tablet, behind the cathedral, is guarded day and night as it is said to house the Ark of the Covenant – a gold-covered receptacle for the two stone tablets that are inscribed with the 10 commandments. According to the legend, which any Ethiopian can narrate to you, it was brought to Ethiopia by the son of Queen Sheba and King Solomon – Emperor Menelik the first. 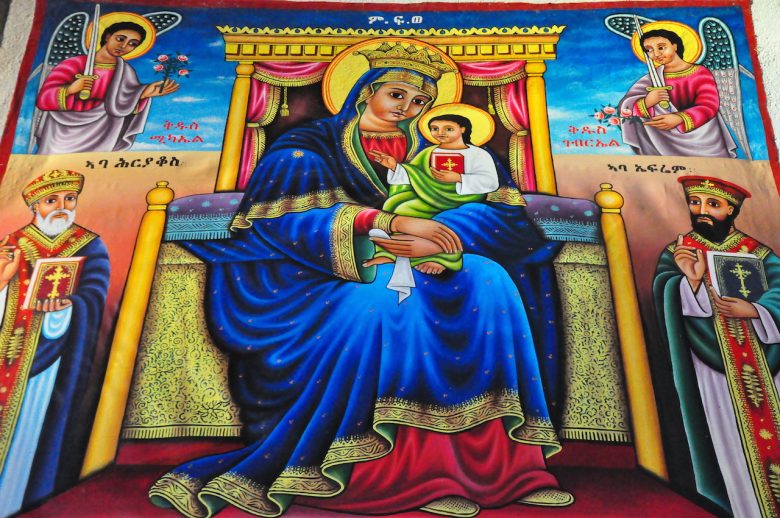 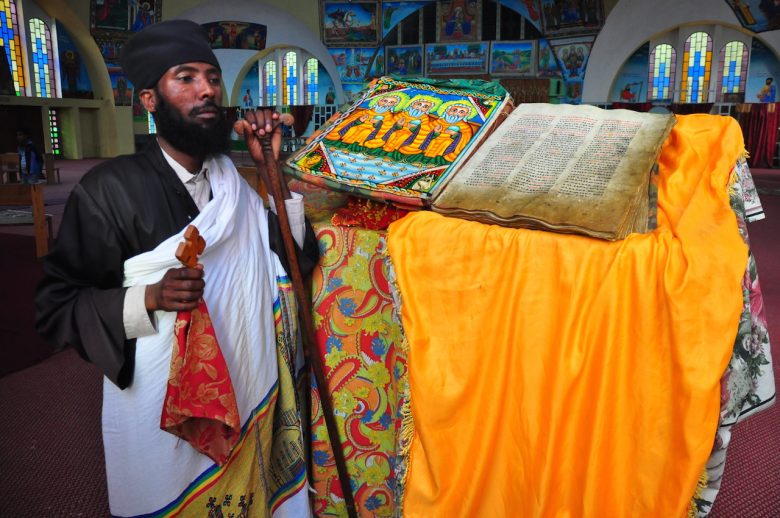 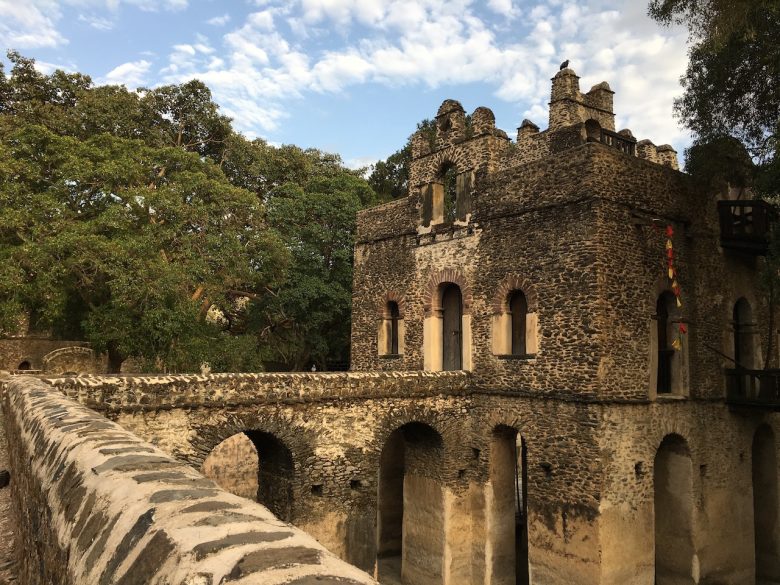 Ethiopia is indeed a land of royalty. Fasil Ghebbi, also named the Camelot of Africa because of the six castles within the seven hectare stone-walled compound, lies in the 17th-century fortress city of Gondar – the former capital city. Though impressive, it was Debre Birhan Selassie Church that made the greatest impression on me. The small church appears very humble on the outside, but the interior is adorned with biblical murals, while the ceiling is painted with the faces of angels. 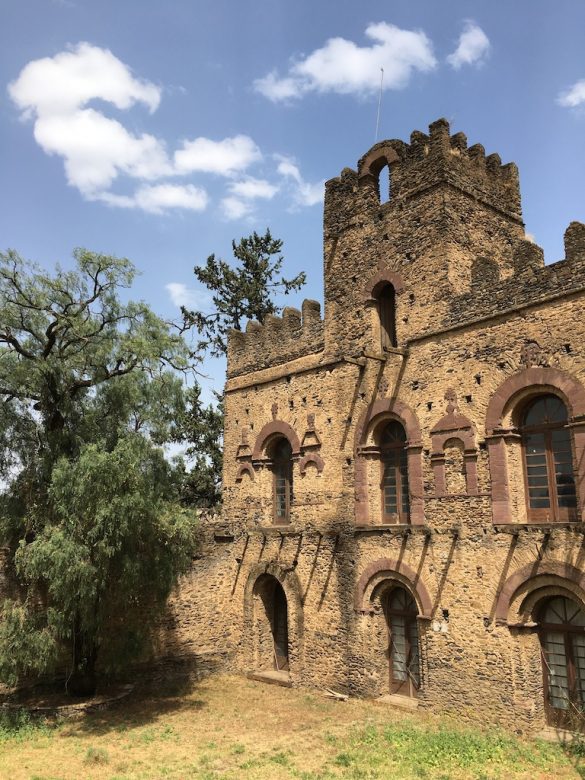 Later, when we climb into the ancient royal baths at Fasiladas’ bath, I imagine what it must look like each January, when it’s filled to the top with water and people for the annual Timkat festival that re-enacts the baptism of Jesus in the Jordan River. Our guide Henok Birhanu Abebe takes out his phone to show us the videos. Suddenly the place comes to life, just like his eyes. Ethiopians are fiercely proud people, and for good reason too. 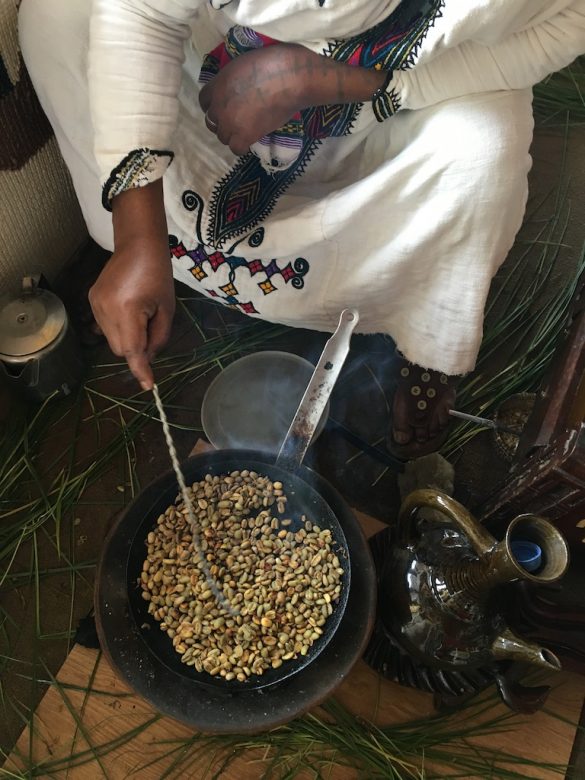 Ethiopia is the birthplace of coffee, so there’s no surprise that it percolates through every aspect of daily life. Ethiopians pride themselves in their long-standing coffee rituals. Everywhere I went, I saw white-cloaked, female coffee sellers hand-roasting coffee beans in clay pans on street corners, in cafes and restaurants, airport lounges and hotel lobbies. The aroma is the best advertisement and you can expect to pay a fraction of the price you’d pay back home, and savour twice as much flavour. Truly passionate coffee connoisseurs can trek the forests of the highlands along a coffee route in search of Yirgacheffe, Wollega, Sidamo, Harrar and Jimma beans.

While most hotels offer a variety of ‘international’ meals – think chicken schnitzel with salads, succulent freshwater tilapia fish with fries, as well as a hearty lamb or beef stew – there is a wide selection of affordable, traditional food options.

Because many Christian Ethiopians fast on Wednesdays, Fridays and during religious holidays by not eating animal products, there are a number of local dishes that are suitable for vegan, lactose-intolerant and glucose-intolerant travellers. And they’re usually cheaper than international meals too.

Be adventurous and try my favourite: Bayenetu, a type of vegan, gluten- and lactose-free platter. It consists of a large injera (pancake made from fermented teff flour) that is generously topped with Shiro (chickpea paste) and sauces called Wats. Expect large dollops of curried potatoes, cabbage, beetroot cubes, spinach, as well as pea stews and pureed lentils.

Eating local food is a ceremony, and family members or friends often share communal meals. Your waiter will bring a jug of water, bucket and towel to your table to wash your hands with, as Ethiopians eat traditional food using their left hand.

The award-winning national carrier Ethiopian Airlines offers an extensive network of flight connections to its capital city of Addis Ababa and 98 other international destinations. A modern fleet, included the Boeing 787 Dreamliner, operates the direct flight from South Africa; with 11 weekly flights from Johannesburg, seven from Cape Town and four from Durban. Ethiopian Airlines is the only airline to operate domestic flights from Addis to 19 other cities, including Lalibela, Aksum and Gondar.

No matter where you travel there’s always some risk, though while travelling in a group and later by myself, I never felt that my safety was threatened, nor did I feel uncomfortable. Of course petty crime can happen anywhere in the world and poverty is a reality, but I found locals to be very friendly and helpful, especially when they learned I was a woman travelling alone.