Inspired by greatness and lead by our impassioned CEO Stephan Ekbergh, at Travelstart we often find ourselves looking to history-making feats of the past to stimulate our path forward. So when word started circulating the office about a scale plane that was going to be hung in the Cape Town office in the coming weeks, there was a distinct stir of interest and enthusiasm as we all anticipated the arrival of this monument to our momentum.

Check out the video below documenting our current big story …

About our H1 Racer replica

The plane is a 1/3 scale Hughes H1 Racer model, and was built by Swedish aviator Mikael Carlson. Mikael is a commercial and display pilot, aircraft builder and restorer and model builder.

The Hughes H1 Racer, built in 1935 and funded by aviation and film pioneer Howard Hughes (you might remember him from the award winning 2004 flick The Aviator), broke the world record for being the fastest plane in the world at the time, reaching speeds of 566km/h.

Much like the journey Stephan made with his family in 2004, the plane was packaged and shipped from Sweden to Travelstart’s head office in Cape Town, South Africa. The total weight of the plane and the box totalled 146kg!

Soon after the H1 Racer landed in Cape Town, Mikeal Carlson touched down. He spent 1 week in Cape Town. During this time he unpacked, assembled and hung the H1 Racer in the atrium of the Travelstart’s offices near Greenmarket Square.

A layer of tinting was added to the atrium windows to protect the H1 Racer from the harsh African sun.

Scaffolding was erected from the ground floor all the way up to the 8th floor where the plane would be hung.

Carlson uses scaffolding, tables and cushions to prop up the H1 Racer for the stress test.

Using steel cables designed to withstand a weight of up to 100kg (the H1 Racer weighs about 44kg), Carslon connects the nose and tail of the plane to the ceiling.

… And there you have it – a few weeks on and the plane hangs firmly in place, a reminder and tangible appreciation of the Spirit of Pioneering to all of us who work at Travelstart offices in South Africa and abroad. 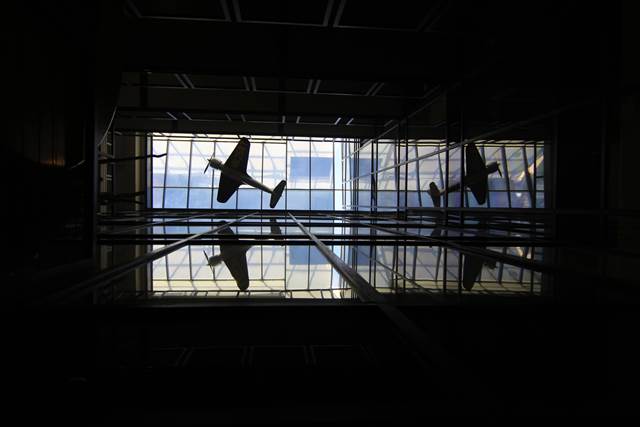 Looking Up! The H1 Racer as seen from a few floors down.