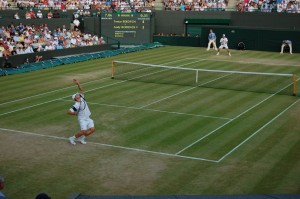 Wimbledon, one of the four major tournaments in tennis, is set to play June 20 to July 3 (the middle-Sunday, June 26, is a designated rest day and no matches will take place).

The tournament originated back in 1877, and has always been played at the All England Club, just southwest of Central London. It’s one of the four major championships in tennis, but is the only one still played on the game’s original grass surface.

Many people often believe tennis’ oldest tournament must be highly-exclusive, and that tickets are priced out of reach for most of us, but this is not actually the case. Each day of the event, general admission to the grounds tickets are available at a reasonable cost of £5-20, depending on what time and day you wish to attend.

While a Grounds Ticket doesn’t give you access to the three “show courts,” you can still watch tons of tennis action on 16 other courts. Grounds tickets also provide access to Henman Hill (photo below), a popular area at the northern end of the grounds at the All England Club. Large crowds gather here to eat a picnic and watch the tennis matches from the show courts live on a giant TV screen. The atmosphere on the hill is friendly and festive to say the least (actually, it’s quite a party). Crowds that gather in this area are often featured in television broadcasts from Wimbledon. The name takes after former British tennis player Tim Henman, with the terrace’s original name being Aorangi Terrace. 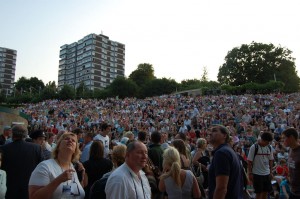 The more exclusive “show court tickets” are for headline matches on centre court and courts 1 and 2. A ballot has been held for show court tickets since 1924, which is substantially oversubscribed each year, and successful applicants are chosen randomly by computer. However, fans without show court tickets can still queue in hopes of obtaining one. This can be done two ways; by queuing overnight, with many camping overnight on the grounds (there are facilities to store your camping equipment). There is also a system where in place whereby if an attendee must leave early, their ticket is re-distributed to those in the queue.

This system has been in place since 2003, and in 2010, they handed out their 1 millionth queue card to Rose Stanley of South Africa.

128 male and 128 females participate in the singles competition, with 64 pairs in both the male and female doubles event, along with 48 pairs of teams competing in the mixed-doubles event. In all, more than 700 matches will be played at Wimbledon this year.

In 2012 Wimbledon will also host the tennis portion of the Olympic games. Find out more about events in London in 2011.