South African Airways held a formal launch for their new A330-200 at the African Pride Crystal Towers Hotel in Century City, Cape Town. The A330-200 is a brand new plane and offers travellers direct flights from Cape Town to London.

Myself and Wouter set off for Century City and the Crystal Towers Hotel on Tuesday evening (11th October 2011) looking forward to cocktails snacks and a few celebratory glasses of wine. While the canapés and chocolate brownies didn’t disappoint, the real reason we were there was to find out more about this magnificent new aircraft.

The evening began with a slick video production by South African Airways – some nostalgic black & white footage from the early days led to the fast paced present and the beautiful SAA A330-200 Airbus. Believe me when I say this plane looks magnificent and is going to go a long way in impressing customers who were getting tired of the older SAA aircraft on the Cape Town to London route. Some points that stuck out for me: 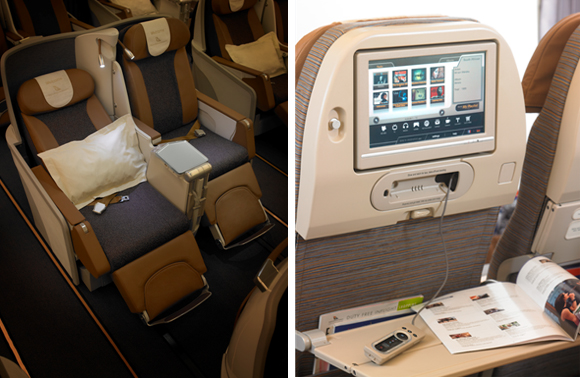 From the speeches it’s evident that South African Airways are extremely proud of the newest addition to their ever growing fleet and for good reason. It’s a faster, quieter and more environmentally friendly plane and with seating for 220 passengers they’re well-positioned to meet the demand for flights from Cape Town to London. 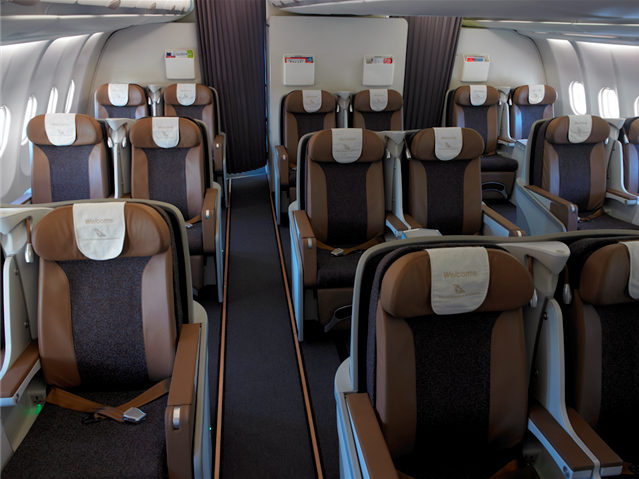 While most of us in attendance were travel industry representatives, I happened to get chatting to Ken Gillham. I noticed he didn’t have a nametag on so I asked what company he was from. It turned out that Mr. Gillham is an SAA Platinum Life Cardholder and had been invited to the event as he’s a long standing and loyal customer of our national airline.

He pulled the SAA Platinum Life card from his wallet so I could take a look. The card itself is pretty non-descript but it comes with some serious benefits and perks for the holder. One example of this is the airport limousine service Ken’s entitled to at both point of origin and destination as a Platinum Life Cardholder. After speaking to Ken, it’s obvious that one has to do A LOT of flying to become a South African Airways Platinum Life member. He used to work for BP as a safety and environmental official and flew all over the world with SAA, thus gaining insurmountable air miles. He still flies to the UK regularly and is looking particularly forward to the added comforts of South African Airways’ new A330-200. Now retired, he lives in Pinelands, Cape Town where he owns and runs Rosedale Guest House. 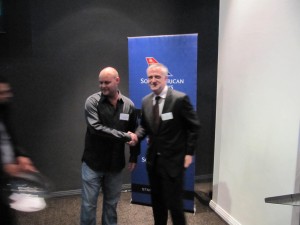 Theunis Potgieter, SAA Commercial GM closed the evening. In his speech he highlighted SAA’s mantra and commitment of Bringing South Africa to the world, and the world to South Africa. Everyone was now fixated on the large fishbowl that had been used as a receptacle for all the business cards that had been collected for the 2 Business Class flight tickets from Cape Town to London.

Imagine my surprise when my name was drawn from the fishbowl! Having never flown Business Class, I’m really looking forward to the experience and will be sure to report back on SAA’s new A330-200 as well as the Cape Town to London flight. I’ll probably take the trip in 2012 so watch this space or enter your email address into the field (above right) and receive our blog posts direct to your inbox.

I’d like to thank Theunis Potgieter, Glen Mboweni and Debbie Theron from South African Airways for putting on a fantastic event and for the wonderful prize. Travelstart customers can look forward to flying on the SAA A330-200 next time they book flights from Cape Town to London with South African Airways.

Book your SAA flight to London with Travelstart!