April was a really good month for our national carrier. SAA was recently awarded the title of Most On-Time Airline in the World as well as Best Business Class Product among Star Alliance Carriers. 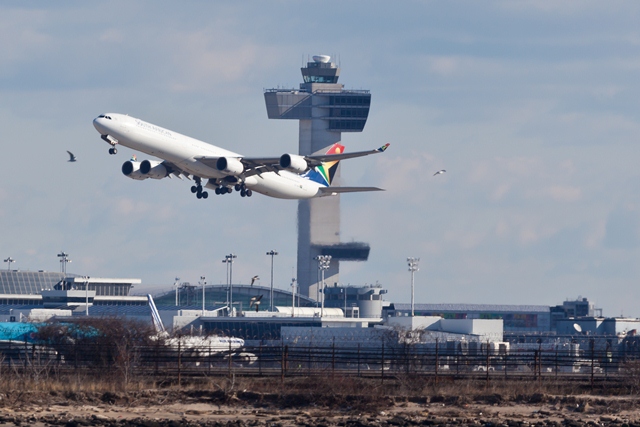 The pride of the nation leaves New York’s JFK Airport

While the Most On Time Airline honour was awarded to SAA by FlightStats Inc.*, the Business Class Award came as a result of a separate “Mystery Shopper” project arranged by FVW**, Germany’s leading travel trade magazine.

According to the FlightStats report, South African Airways was one of only two major airlines that delivered 90% of their flights on time in March 2013. SAA took the number one spot with 92.26% whilst Gulf Air came in a close second at 92.11%.

The On Time award comes ahead of recent news that South African Airways has received authorisation to fly new safety enhancing and fuel saving departure and approach procedures. The approval, which is the first in Africa, paves the way for further developments that could enhance safety and increase operational efficiency throughout SAA’s route network. The use of the new technology can further decrease travelling time on trips to and from Cape Town, for instance, by 5 – 10 minutes. **FVW is Germany’s leading bi-weekly trade magazine for tourism and business travel providing independent and objective information about the latest trends and current developments in the market. FVW is known as a synonym for reliable and objective journalism with a maximum of in-depth information and great variety of topics. Its analysis and background reports serve as basis for decision-making.

Having been the victim of some negative press in recent times, it’s our hope that you’d join us in wishing the national flag carrier a hearty congratulations! South African Airways has proven that they can fly in the face of negativity by racking up no less than 2, global, independent awards.

With a route network spanning no less than 26 African destinations as well as access to over 1300 airports in almost 200 countries through its Star Alliance membership, SAA is one of a handful of airlines that have direct flights to all continents.