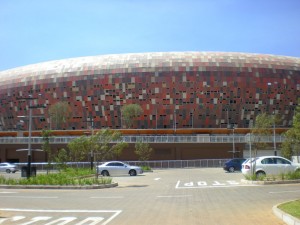 Surely few stadiums in the world can rival the originality, beauty and just plain awesomeness of the FNB Stadium in Johannesburg.

Known as ‘Soccer City’ during the 2010 World Cup, this fabulous Jozi landmark hosted many games including both the opening and closing matches. I was fortunate enough to watch Ivory Coast play Brazil during the World Cup at the venue and it really was a once in a life time experience. The Stadium was newly renovated and the vibe unbeatable.

The World Cup was staged over a year ago but Soccer City Complex (FNB Stadium) is still worth a visit.

Originally built in the 1980’s, this Stadium definitely has a place in South Africa’s history as this is where Nelson Mandela first addressed the Joburg crowds after his release from prison. 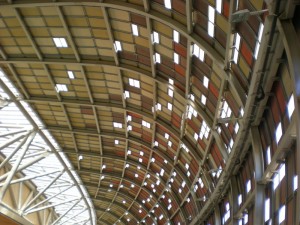 A stunning view of the roof of the FNB Stadium

The FNB Stadium underwent a huge renovation for the World Cup with the exterior redesigned to resemble a calabash (traditional bowl or gourd) while the canvas on the top conjures up an image of frothy beer foam. Most appropriate as South Africans are known to appreciate their golden nectar.

If you can’t attend a match at the Stadium, I recommend that you go on one of their tours. They are great. You go behind the scenes in the locker rooms, press rooms, boxes, cafeteria and my favourite…you get to stand on the pitch and look out at the stadium. WOW. Their guides are really knowledgeable and it is just breathtaking standing in the empty stadium.

Some fun facts about the stadium:

Did you know it is the largest stadium on the African Continent? It has 88 530 spectator seats 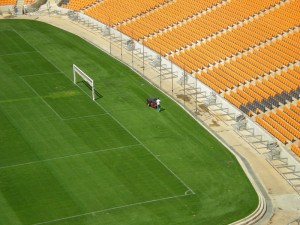 Looking after the field at the FNB Stadium

There are 15 000 parking bays for spectators and 4000 for VIPs’. Although in my experience the best way to get to a match is by bus or train.

To Book a Tour: