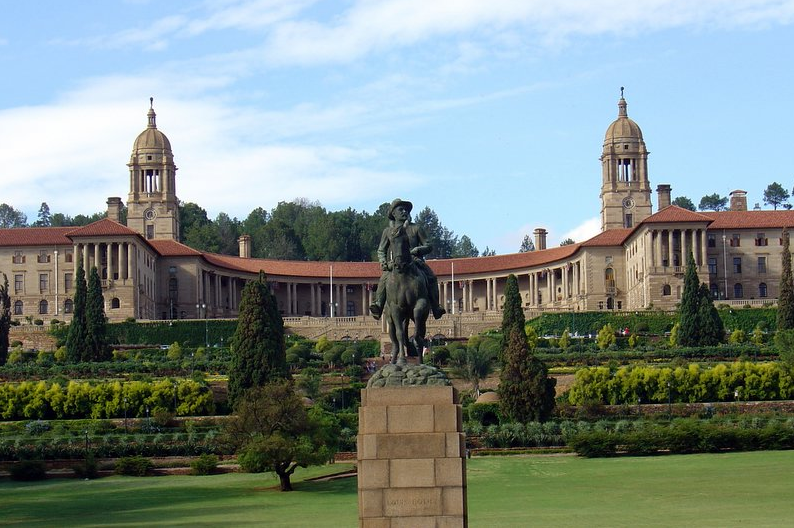 Image credit
While the official seat of the South African government might not seem like the most thrilling place to visit, the Union Buildings in Pretoria are, in fact, very beautiful and a lovely spot to while away an afternoon if you find yourself in Pretoria with a few hours to spare.

Drive up the long driveway and you’ll find yourself facing the imposing silhouette of our nation’s government, on top of Meintjieskop, the highest point in Pretoria. They are one of the South African National Monuments. The Buildings are the location of Presidential Inaugurations and are also, funnily enough, where Matt Damon walked up the stairs to meet Morgan Freeman in the movie Invictus.

To actually get inside the Buildings requires a number of security checks, but the beautifully terraced gardens are a delight to walk around, full of indigenous plants, manicured lawns and various monuments (most notably two of our early prime ministers: J.B.M Hertzog and General Louis Botha). There is also a 9,000 seat amphitheatre, and the Delville Wood War Memorial, a tribute to South African troops who died while fighting in the First World War, and a plaque in memory of those who died in the Korean War. Despite the seriousness of the décor, the gardens are filled with the talk and laughter of visitors – both local and international, young and old – and the perfect spot for a picnic.

The Voortrekker Monument, also in Pretoria, is a giant granite structure designed by Gerard Moerdijk and built in honour of the Voortrekkers. The architect, Moerdijk, described it as: “a monument that would stand a thousand years to describe the history and the meaning of the Great Trek to its descendants.” Because it sits on top of a hill, it can be seen from any spot in Pretoria. The monument may look quite plain from the front, but inside it has the Historical Frieze and the Cenotaph – both great photo opportunities. It is also impressively huge, 40 metres high with a base of 40 metres squared.

The one thing all visitors to the Voortrekker Monument remark upon is the hole in the centre of the dome. Once a year (on the 16th December) at midday, a single ray of sunshine shines through the hole in the dome straight onto the middle of the Cenotaph, illuminating the engraved words, Ons vir jou Suid Afrika (We for you South Africa). December 16th 1838 is the date of the Battle of Blood River, and is now a public holiday in South Africa – Day of Reconciliation. Every year in November, the monument is lit with a blue light to celebrate National Diabetes Day on November 14th.

And while the rest of the year might not offer any light displays, it is still a tourist attraction well worth visiting!