After arriving at Cape Town Airport with passable prep in hand, I felt it would be better to just ‘wing it’ rather than go through a list of boring, search engine generated questions. 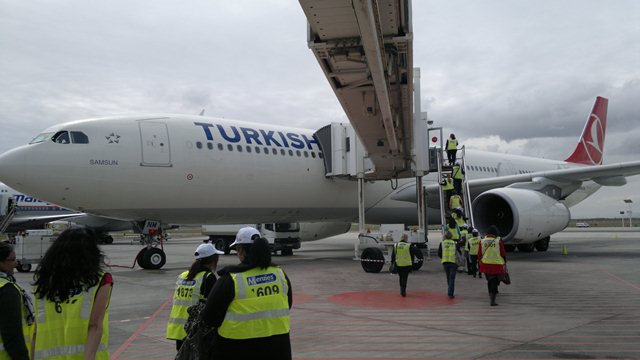 Turkish Airlines A330-300 at CPT Airport

We met at Turkish Airlines’ Cape Town office at the airport, collected our security permits and were taken through to the CIP Lounge* at Cape Town International. A short walk across the apron and we were ready to board the spectacular A330-300 (there are 7 A330-300s in the Turkish Airlines fleet).

*The CIP Lounge at Cape Town International is a secret world known only to the rich & famous and security personnel that work there. It’s used to process VIP’s and dignitaries when they enter/exit South Africa so they don’t have to rub shoulders with the rest of us. I snapped a shot for you guys below.

A rare photo of the CIP Lounge at Cape Town Airport

Upon entering the plane the first thing that struck me was the space. Granted we were the only people on the airliner but the whole cabin seemed very spacious. A Turkish Airlines representative told me the planes capacity was 289 – that’s 261 Economy Class Seats and 28 Business Class seats. There are 8 toilets on board of which 2 are reserved for Business Class passengers and there are specially adapted facilities for disabled passengers. 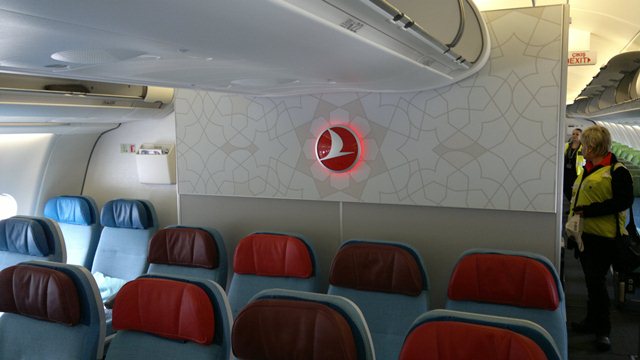 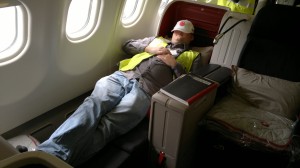 They see me flyin’, They hatin’

Having never experienced business class I was really excited to see what Turkish Airlines had to offer in this category. Below a breakdown of some of the features that stood out for me:

Turkish Airlines’ in-flight entertainment is called the Planet Digital System and comprises 200+ movies including classics, new releases and animation for the kids. In addition to the movies on offer you can also enjoy popular TV series, documentaries, music and games for adults and children. All of this is accessible from the seat console and is available across all classes. 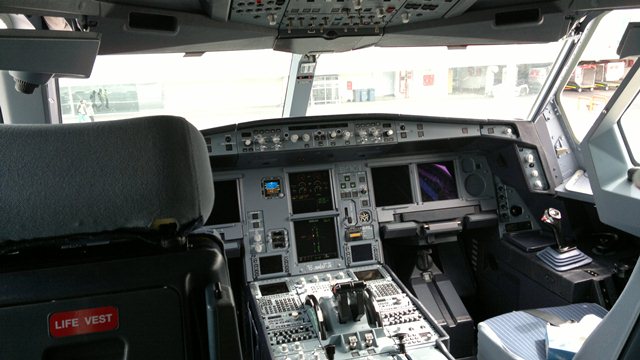 They even let us in the cockpit! Please Note: This is not the in-flight entertainment system

What impressed me most is that each seat comes with its own USB port. This means you can bring your own movies and music etc. and enjoy it through the Turkish Airlines IFE setup. Cabin crew can supply specialised plugs for iPad and iPhone users on request. They’re currently working on inflight Internet and hope to have it up and running by the end of 2011.

Each seat has its own phone attached to the console that allows you to make calls to anywhere in the world from 30 000+ feet. It works on a credit card swipe basis and at US$10 per minute it’s not cheap but is at your disposal should there be an emergency on the ground. You can use the same device to chat to passengers in other seats on your flight free of charge.

For those of you that prefer some light reading then pick up a copy of Skylife – Turkish Airlines’ in-flight magazine. You’ll find your free copy in the seat pocket in front of you or if you prefer travelling light then download it for your iPad from the App Store.

No matter what airline you choose, Economy Class is always going to be easier on the pocket. When it comes to Turkish Airlines it boils down to a question of space since you get the same in-flight entertainment/communication features in Economy Class as you do in Business Class.

In the image below Kirsty demonstrates the space differences between Turkish Airlines Economy Class and Business Class. 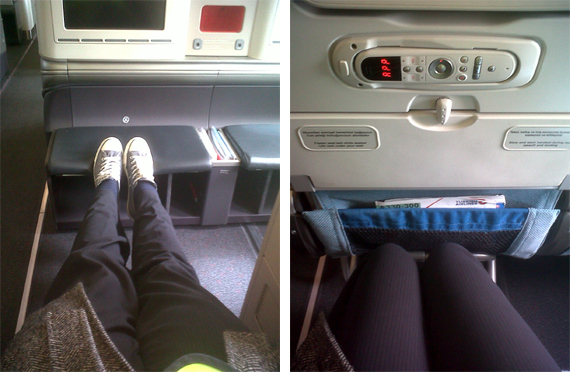 Hot Tip: Upon checking in for your Economy Class Turkish Airlines A330-300 flight try reserve the aisle-side middle seats in Row 37. They offer more legroom and are a great alternative if you miss out on the emergency exit seats. 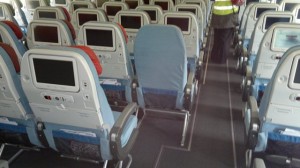 There’s also a Comfort Class (not available on the plane we inspected) that blends the convenience of Business Class with the reasonable rates of Economy Class.

With a world class international airliner and friendly staff, it’s no wonder Turkish Airlines was recently named the winner of the categories, “Best Premium Economy Seats” and “Best Airline Southern Europe” by Skytrax in 2011. After the inspection we returned to the CID Lounge where we were greeted by some light snacks and beverages. If the scrumptious canapés are any indication of what’s in store for you when you fly Turkish Airlines then you’re in for a taste treat.

Turkish Airlines flies direct from Cape Town (with a short stopover in Johannesburg) to their hub city of Istanbul with connections to other international destinations. Flights depart daily from Cape Town and Johannesburg (O.R. Tambo) except Wednesdays and Saturdays.

Thanks again to Ebru Karasakiz, Mechaela Adams, and Zafer Bolukbasi and their team from Turkish Airlines South Africa for showing the plane and to Adiel and Jolene from Travelstart for organising everything. You can call Turkish Airlines’ Cape Town office on 021 936 3442.