Greece is an amalgamation of profound stories of ancient gods, Mediterranean aromas and exotic islands. You’ll find Greece located at the crossroads of Europe, Asia and Africa. Popular attractions include the islands of Crete and Mykonos, the Acropolis in Athens and Thessaloniki. The best time to visit Greece is in spring to early summer (April to mid-June) and autumn (September to mid-October). Let’s unpack the weather, sea temperatures, flight prices and festivals to look forward to! 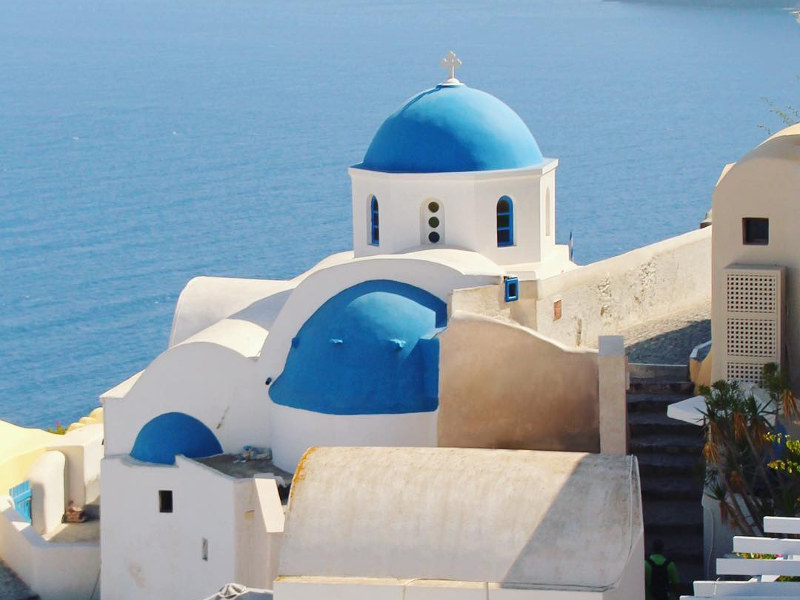 The weather in Greece varies from the Greek mainland to the many Greek Islands. Make sure you’re prepared for the weather no matter where you’re heading to in Greece.

The capital of Greece, Athens, has a Mediterranean climate, with mild rainy winters, and hot and sun-filled summers. In winter (December to mid-March), the cold air from the Balkan Peninsula can cause cold and rain for many days, and sometimes snow. In summer, the temperature can reach up to 35°C and sometimes even 40°C.

Santorini is the largest and southernmost of the Cyclades (an island group in the Aegean Sea), it also experiences a Mediterranean climate. You can expect rain from October to March. From June to mid-September (summer), Santorini is sunny and warm but the wind makes the heat bearable. It almost never pours in summer. Initially, autumn is quite sunny and warm, but gradually the first rains occur and eventually becomes more frequent. In winter, you can expect cold days with temperatures averaging 10°C.

Heraklion is located on the largest Greek island, Crete. During winter, it is possible to see snow on the island’s mountains. If you’re lucky, you can spot snow in spring too. Crete is not exposed to cold weather as much as the other Greek islands. Heat waves can occur which sees temperatures peaking at 35°C on the island’s coast and 40°C in the interior.

The best time to visit Greece is during spring (April to early-June) and autumn (September – October). You can enjoy mild weather and fewer crowds during these shoulder season periods. The shoulder season offers you the opportunity to embrace the fun in Greece while not straining your budget. You’ll see that prices for hotels and tours are less from April to mid-June and again from September to mid-October. To get more for your money, consider exploring lesser known Greek destinations, like Milos and Lesvos. Spring welcomes incredible wildflowers in full bloom and gorgeous scenery provide epic photograph opportunities.

One disadvantage you’ll find travelling in the shoulder season is that some hotels, shops and restaurants do not open for business until June and will opt to close in October again. This is due to the slow pace of life of the locals witnessed on many islands.

Choosing to visit during Greece’s shoulder season affords you the opportunity to experience a different side of Greece, away from its popular Mediterranean glamour with bronzed beach bodies and vibrant nightlife. The shoulder season is the best time to visit Greece for its natural beauty without the influx of crowds. This is the time to take in the cosy, family-centric villages where locals indulge you with their generosity and food. Santorini is the idyllic island destination during the shoulder season, with epic experiences such as beautiful Mediterranean sunsets, breathtaking hikes along the calderas, while restaurants, shops and wineries welcome visitors during autumn.

The beaches along the islands, like Mykonos become much more pleasant as the predictable summer crowds leave. You can delight in the warm Mediterranean waters with much-appreciated privacy. Autumn is the best time to visit Greece for its abundance of fruit as it is peak harvest season. Fruit is much cheaper to purchase during autumn when you can delight in scrumptious tomatoes, figs, melons and grapes. Spring and autumn is also the best time to visit Greece for the historic and breath-taking archaeological sites and cities.

If you’re heading to Greece for Easter, take note that almost all hotels outside Athens are booked well in advance as city slicks make their way to the countryside for Easter festivities. Museums and many sites are closed on the holy days, including Good Friday, Easter Saturday, and Easter Sunday. 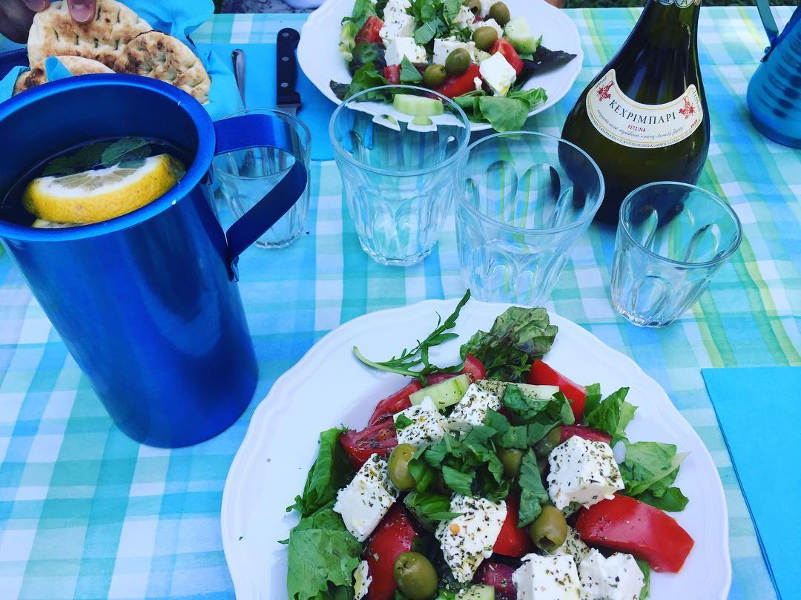 Summer (late June to early-September) is high season in Greece. Popular destinations like Crete, Rhodes, Mykonos and Santorini become a spectacle dazzled with visitors seeking the best of Greece’s summertime pleasures. The Cyclades sees a tremendous influx of visitors during the high season. The rest of the Greek islands also welcomes a large number of people. The high season could also be the best time to visit Greece if your goal is to visit the Greek mainland – these include the semi-abandoned villages in the mountainside and the bustling cities of Thessaloniki and Athens.

During the summer months, the temperatures are rather hot and the crowds are overwhelming. However, it is also the best time to visit islands like Mykonos for its lively nightlife during Greece’s summer. Do take into account that August is the Greek Islands’ busiest and most expensive month, so book accommodation way in advance. 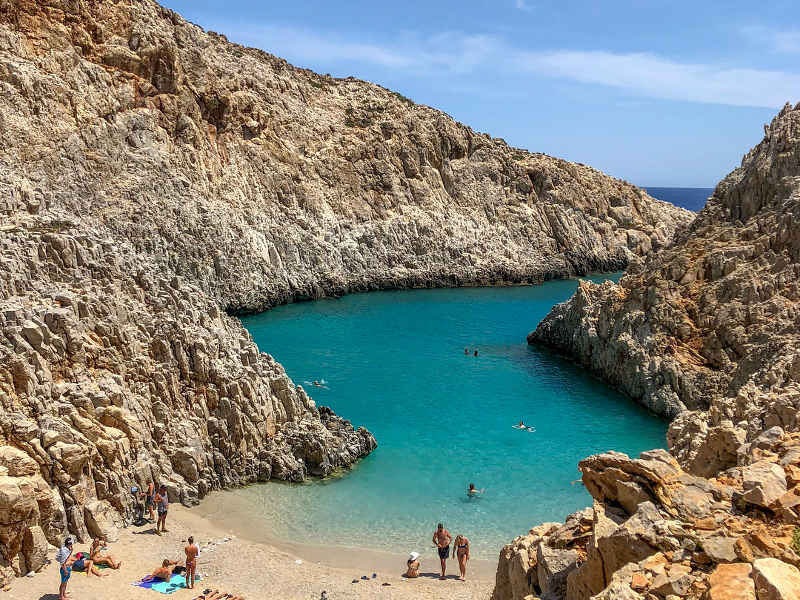 The best time to visit Greece’s beaches on the Greek Islands is from late May to early-October. The sea water is amazingly warm which is great for swimming and the weather is great for sunbathing. In Heraklion, head out for a swim from July to September when sea temperatures reach 25°C.

Greece’s daylight hours increases as the warm and sunny months approach. During spring and summer, you can expect up to 14 hours of daylight, while in the colder months of autumn you’ll be exposed to an average of 10 hours of daylight.

How Much are Flights to Greece?

Flights to the capital city, Athens, are affordable and once you’ve landed in the city you can catch a ferry to the many Greek islands.

Flights to Athens are 20% cheaper during the shoulder season as fewer crowds flock to Greece. For cheaper flights, ferries, accommodation and touristic attractions, this would be the best time to visit Greece.

To avoid disappointment, book your flights and accommodation at least three months in advance! 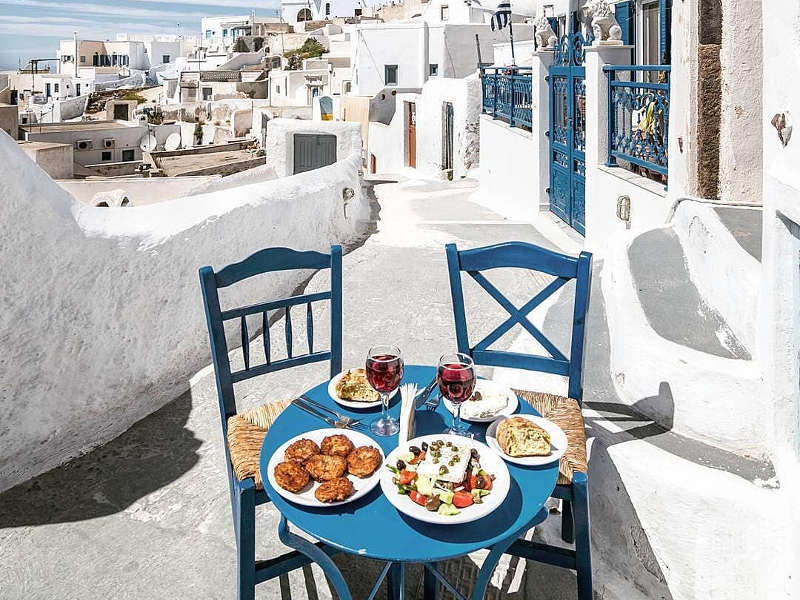 The Greek calendar is abundant with festivals that will keep you entertained while exploring Greece. Most festivals take place in summer.

Aprokies translates to “The Carnival” and it entails three weeks of dancing and feasting. Aprokies is celebrated three weeks before Lent Monday. Head to places like Patra, Corfu island, Xanthi and Rethymno to see great carnival parades and entertaining parties.

Easter is the biggest event on the Greek event calendar (the dates change from year to year as it goes according to the Greek calendar). This is when you’ll see candlelit street processions and church services held every evening. Holy Week commences on the Saturday (one week before Easter Sunday) known as Saturday of Lazarus.

Rouketopolemos translates to “rocket war”, it is an annual local event held during Easter. Rouketopolemos is celebrated on the Greek island of Chios. This interesting event involves two rival church congregations in the town of Vrontados who perform a “rocket war” by firing home-made rockets across town. The objective of firing the rockets is to hit the bell tower located on the other side of the town.

The summer months (July to August) welcome the beautiful sounds of opera, classical music and open-air plays as they fill the balmy summer months in various amazing locations. Throughout the cities, dancing can be seen in the city squares and the Greek National Opera perform epic scores. Catch the best of the festival with ancient dramas performed at the ancient city of Epidaurus.

Make your way to Kos Island to partake in the Hippocratea Festival which is a celebration of dancing, theatrical performances and outdoor concerts. The festival also provides the chance to visit many of Kos’ ancient sites.

With the aim of bringing emerging and established artists and photographers from all over the world together, the Athens Photo Festival creates a space for an exchange of ideas, international engagement and artistic expression.

Rock music enthusiasts will thoroughly enjoy the Rockwave Festival which takes place every June in the village of Malakasa. The festival welcomes sensational international and local bands and musicians, including artists like Arctic Monkeys, Iron Maiden and Lana Del Rey.

Celebrated by the residents on the island of Aegina, fistiki translates to pistachio. During the Fistiki Festival, thousands of kiosks sell pistachio products. The festival is abuzz with painting exhibitions, theatre plays, gastronomy nights and concerts.

It is one of the most important cultural events in Greece. New and emerging filmmakers are afforded the chance to showcase their work at the film festival. 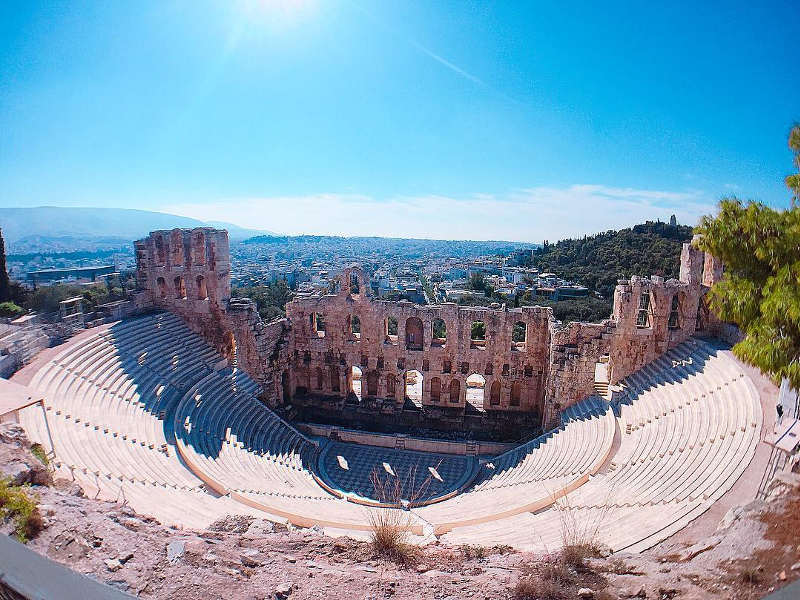 Greece is a Mediterranean dream rich with enviable islands and ancient history to keep you thoroughly entertained. Many visitors flock to this fantastic European destination to indulge in its many pleasures. From the Acropolis in Athens to the Greek Islands, Greece has it all.

Greece should definitely be on your travel list considering all it has to offer! Sign up to Travelstart’s newsletter and get the latest updates on flight specials to Greece.

Once you’ve obtained your Schengen visa, consider booking your flight to Greece during the shoulder season to get the best deals!

Have you had the pleasure of exploring Greece? Share your experience in the section below.