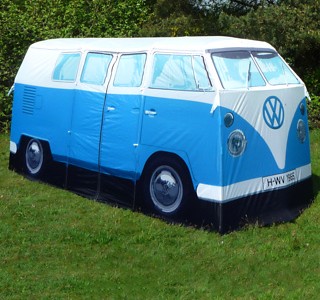 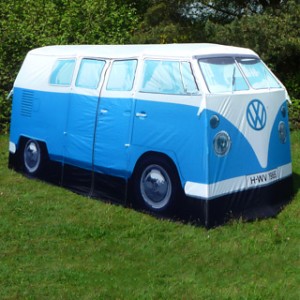 If you’re secretly a hippie at heart or simply an avid camper, then you will surely dig VW tent I found. This gadget website sells the original Volkswagen Camper Van in the shape of a tent. Or rather a tent in the shape of an original VW Camper Van. It depends what way you want to look at it.

As the original iconic VW Camper Van, that was first produced back in 1965, is getting harder and harder to come by nowadays, this tent might just be the next best thing for all you wannabe flower children. From a distance it looks just like the real thing, but as you move closer you’ll see that it’s actually all show and no go. Although the windows feature windshield wipers that look scarily real. You would almost forget that this version is meant to be stationary and won’t actually take you anywhere; it’s you who’s doing the taking.

This groovy piece of camping equipment comes in either blue, yellow or red and has two separate ‘double bedrooms’ that sleep four people. The poles, mosquito netting and lines come with and it is so roomy and spacious that you can even stand up straight in it. The best thing is that it will only set you back around £299.99 which might seem a tad bit pricey for a tent, but compared to a real VW Van it’s a bargain as it will never ever break down.
So get your bell bottoms out, put some flowers in your hair and pitch this VW tent on your next camping trip. It might not be quite the same thing as driving around in a cherry VW Camper Van, you’ll most definitely be the talk of the camp site. Peace out!