In no time at all, new year’s eve will be upon us. How are you planning to celebrate the end of 2019? You could be joining parties with friends or celebrating on the streets. Maybe you’ll be dressing up for a high-end stylish get-together. But what about the new year celebrations around the world?

That’s right, celebrating the end of the year in another country is a great way to experience one of the most unforgettable times you’ll ever have. Let’s take a look at the new year celebrations that will be taking place across the world. 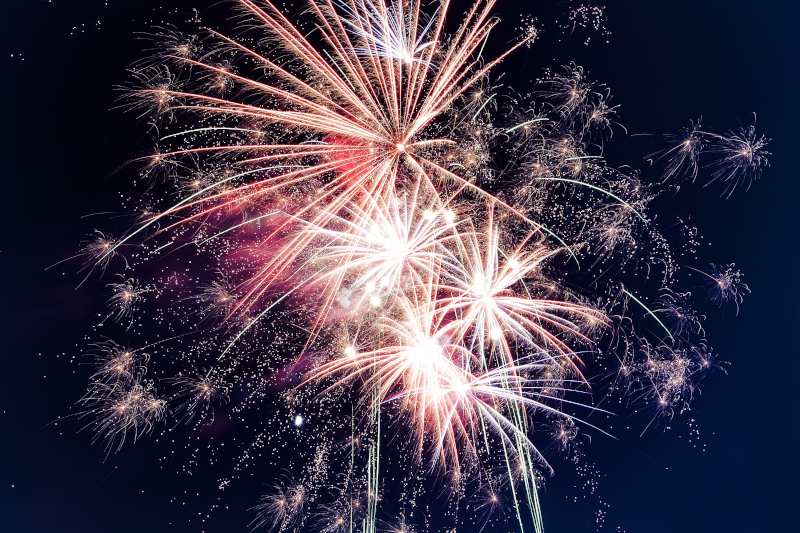 First up, let’s take a look at Rotterdam, the largest port city in Europe. Since it’s home to futuristic architecture, rich creativity and electric nightlife, it’s no surprise that this is where you will get to enjoy the biggest fireworks display in the country!

The main attraction at the New Year’s Eve celebrations is, of course, the National Fireworks which will mark the beginning of 2020. The stunning display will soar to the skies above Erasmus bridge, outlining the city skyline in an explosion of colour! It tends to get crowded in the areas close to the bridge, so make sure you arrive early to secure a good spot. Settle before 23:00, because that’s when the countdown begins.

Of course, this wouldn’t be one of the top new year celebrations around the world without a party!

Two of the most popular parties in Rotterdam include TIKTAK and Herr Zimmerman’s NYE Party. TIKTAK is one of the biggest New Year’s events in the Netherlands, taking place all over the country in cities such as Amsterdam, Eindhoven, Ultrecht and Breda. Herr Zimmerman’s NYE Party is where you’ll get to party in the three huge rooms of Now & Wow Club, which is on the 10th floor of the Maassilo. Greet 2020 with a view over the skyline of Rotterdam!

You’ll want to get settled in the city in time for the celebrations. There are more than 40 places to stay in Rotterdam, with a variety including apartments, bed and breakfast options, hotels, and more! 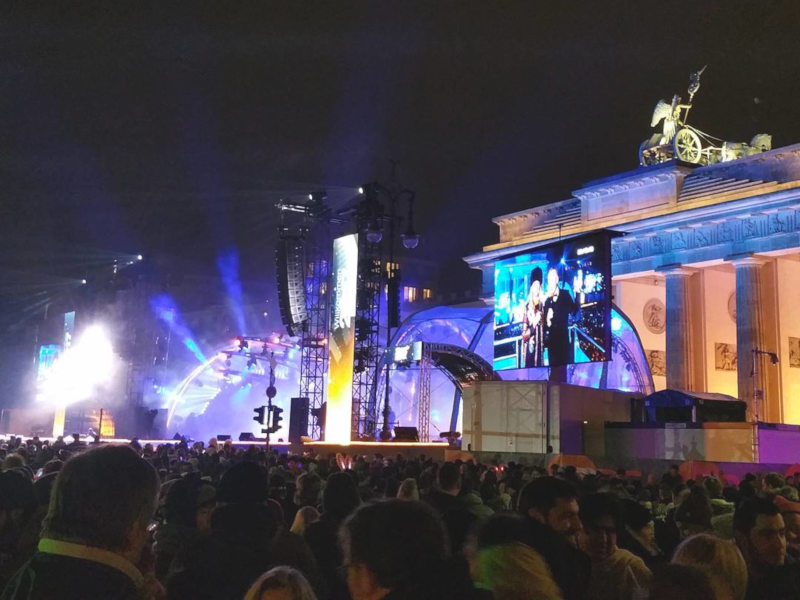 Next for checking new year celebrations around the world, let’s check out the capital of Germany. That’s where you can enjoy one of the biggest street parties on New Year’s Eve in Europe! Berlin is also one of the major party capitals of the world, so this is definitely where you’ll want to be.

Make sure you’re between Brandenburg Gate and Victory Column (a 2-kilometre stretch) because that’s where it will take place. The new year celebrations will feature live bands, DJs and breathtaking fireworks.

The entertainment starts at 19:00 while the fireworks are ignited at midnight. From 00:30, the party kicks off and will carry on for three hours! If you’re interested in the German music scene, some of the main acts for the entertainment include Frank Zander, Lotte, Vincent Gross and Brenner.

Throughout the designated area, get refreshments from food stands offering snacks from all over the world.

Another awesome thing to know about this new year celebration is that entry is free! But since overcrowding can become an issue, you’ll need to make sure you get in early. After a certain point in time, the area will be closed off.

But that’s not the only party that will be taking place in Berlin. Other exciting ones will take place at venues such as Spindler & Klatt, the Maritim Hotel Berlin and Matrix Club.

If you still have the energy for New Year’s day, several restaurants and cafés will be open, serving brunch, along with traditional salty rollmops to help with the potential hangover! You could also catch some fresh air with a walk around the scenic lake of Schlachtensee or the huge park known as Tiergarten.

In case you’ll be spending a few days in the city, check out the range of accommodation in Berlin. Choose from a selection of 3 to 5-star hotels, apartments, guest houses and more. 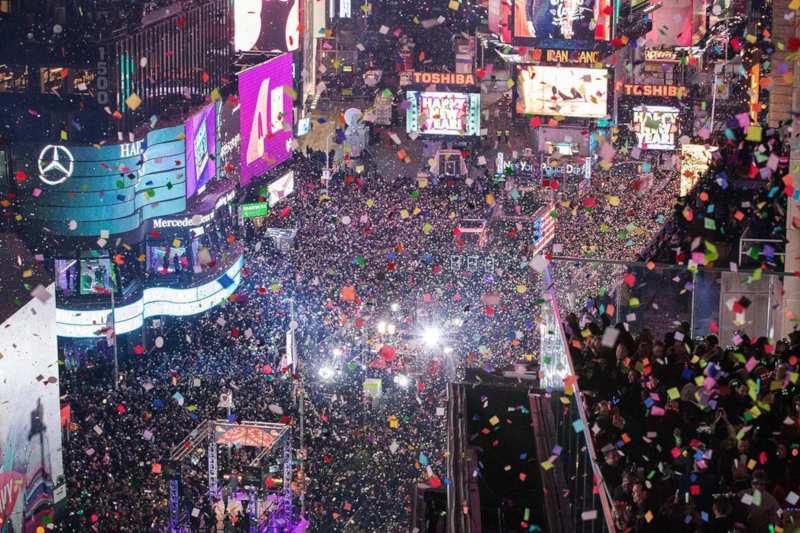 Then, there’s the Big Apple, the city that never sleeps, New York. The place to be to watch the new year arrive is in the grand Times Square. That’s where you’ll get to see the famous ball drop which signifies the stroke of midnight. It’s one of the most popular events in the city around New Year’s Eve, so make sure you get to Times Square early. Even a place as big as that can get filled to capacity!

But there are other ways New York adds to the variety of new year celebrations around the world. Take a look!

Venues around the city pull out all the stops on New Year’s Eve. The last night of the year is a great time to catch a live concert or show at places such as the Lincoln Center in Manhattan and the music halls in the Lower East Side.

Many restaurants in New York serve up special menus for New Year’s Eve. Book a table early if you want to toast in the new year. Satisfying your appetite with a delicious meal is certainly a great way to end the year!

Let’s not forget the clubs and bars, of course! Head a little outside the city, to Brooklyn. Have a night of exciting entertainment at Barclays Center in Fort Greene. Another spot for new year celebrations is Grand Army Plaza in Prospect Park, where you can enjoy the music and watch fireworks. If you love indie-rock, then head to the Music Hall of Williamsburg, a vibrant live music venue, ideal for bringing in the new year.

As for where you can stay, there are close to 400 places to stay in New York. You can make your selection from an assortment of hostels, apartments, hotels and bed and breakfast options. 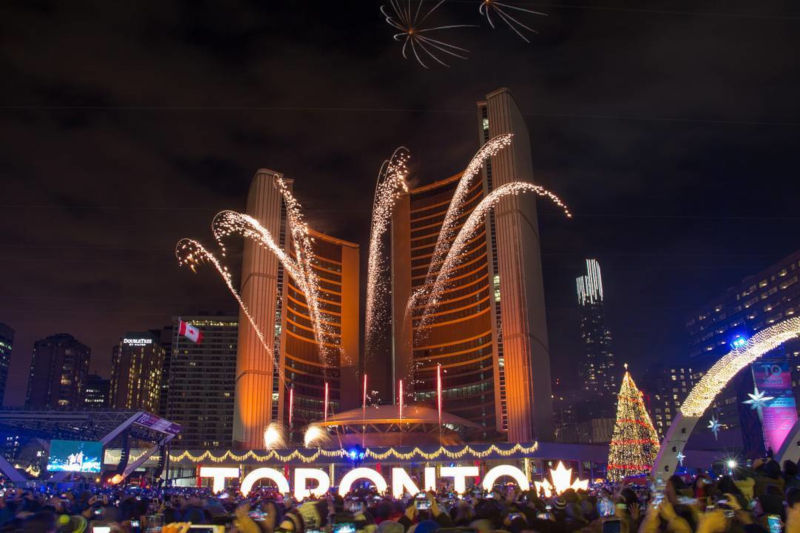 If you love spending time in Canada, then our look at new year celebrations around the world takes us to Toronto.

You can experience the countdown to the new year for free in public spaces such as Nathan Phillips Square or the Mississauga Celebration Square. Look forward to live music, DJs, dazzling firework displays and thrilling ice skating. If you’re taking the kids along, there are kid-friendly events taking place at the New Year’s Eve Celebration in Brampton’s Garden Square.

One of the most iconic party venues for the end of 2019 is the CN Tower! The architectural wonder has an event space that’s perfect for ushering in 2020. If you can get entry to this location, you’ll be enjoying a party in the most unique setting for New Year’s Eve.

Why not treat yourself to a gala dinner cruise? You can celebrate the end of 2019 and the beginning of 2020 with one at the Toronto Harbour. Catch alternating unforgettable views of the city skyline while enjoying the dinner and dancing!

You’ll have an outstanding selection of accommodation in Toronto. Places to stay range from 3 to 5-star properties, including hotels, guest houses and holiday homes. 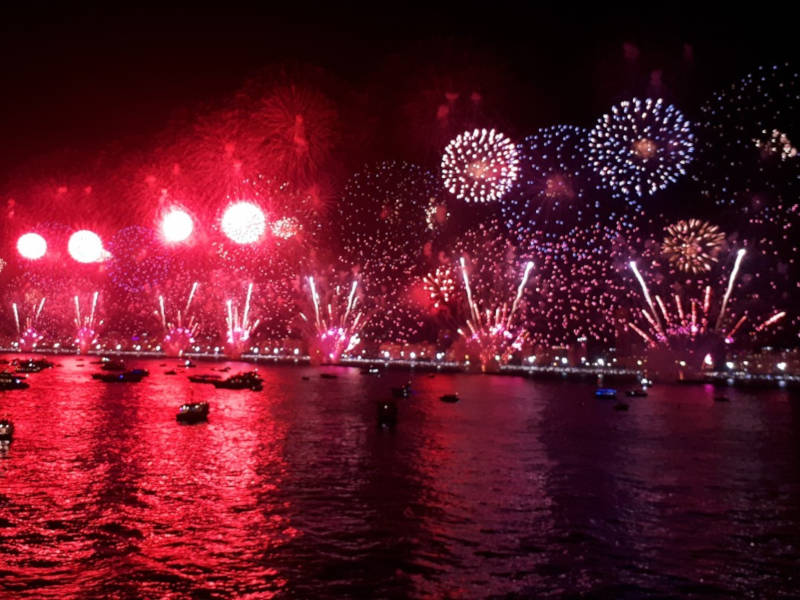 This major party capital certainly could not be left out of this list! If you can picture the incredible carnivals the city has every year, then you know you’re going to have a great time.

The top place to be to watch the firework displays to mark the beginning of the new year is Copacabana beach. The party begins at 20:00 and features live bands ranging from international DJs to top Brazilian legends. Make sure you’re at the venue early though (the beach starts filling up in the early afternoon!) to find a good spot. After all, the beach usually receives more than 2 million people every year for New Year’s Eve. Join the countdown and the cheering and dancing as the skies transform into brilliant colours. It’s customary to wear white (a symbol for good luck for the next year).

After the fireworks end, it’s not the end of the festivities! New year celebrations around the world such as this keep the party going. Enjoy the electric street life or arrange entry into a nearby club beforehand. Keep indulging in the music and dancing with an exciting party at Sociedade Hípica Brasileira in Lagoa. Another location in Lagoa is Palaphita Lagoa, where you can enjoy a range of music genres while treating your tastebuds to the food on offer, including sushi, fondue, finger foods and more.

With all the partying you’ll get up to, make sure you have a place to stay to rest up once you’re done! There are more than 560 places to stay in Rio de Janeiro, such as lodges, hotels, apartments, villas and more.

If you want to experience the beginning of the new year in China, be there during late January or early February. That’s when the locals celebrate the Chinese New Year. The timing of the event is according to the traditional Chinese calendar.

Read more about where you can celebrate the Chinese New Year.

As for accommodation, it depends on where you’re planning to go. You can check out the numerous places to stay in cities such as Beijing, Shanghai and Hangzhou. 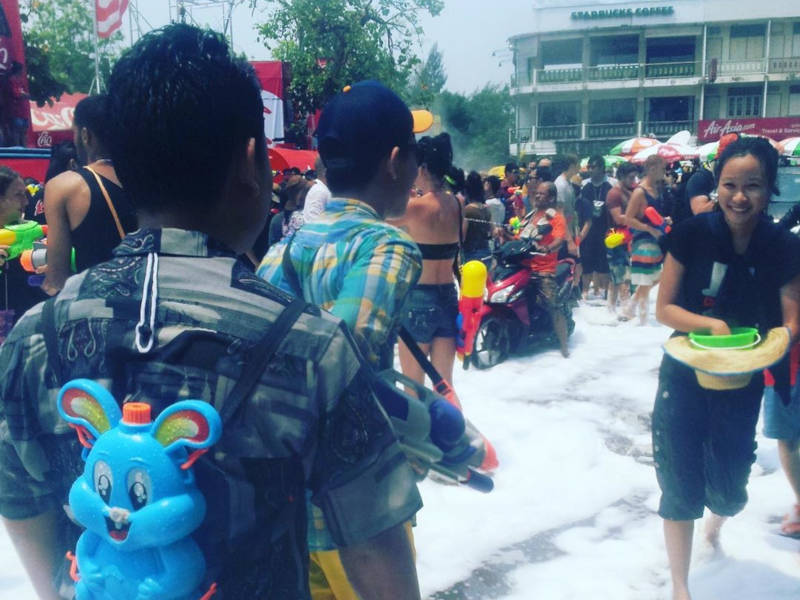 Make sure you’re in Thailand even later in the year, because in April, that’s when you can witness the Songkran Festival, which is the Thai New Year’s national holiday. The festival runs from 13-15 April every year. It is the most popular celebration in the country!

Experience one of the more unique new year celebrations around the world. Water is one of the important elements of Songkran. Why? In recent times, the throwing of water has become a huge part of the annual celebrations!

The first day of the festival features enthusiastic processions of Buddha images throughout the country. But that’s also when the water throwing starts, so make sure you’re ready to get wet!

If you’re interested in more of the local culture, you can observe some of the formal rituals, when many Buddhists go to their temples to build sand chedis (sandcastles built to resemble Buddhist temples).

Since Songkran takes place throughout the country, you just have to decide where to stay. Take a look at our holiday packages for amazing Thailand deals! 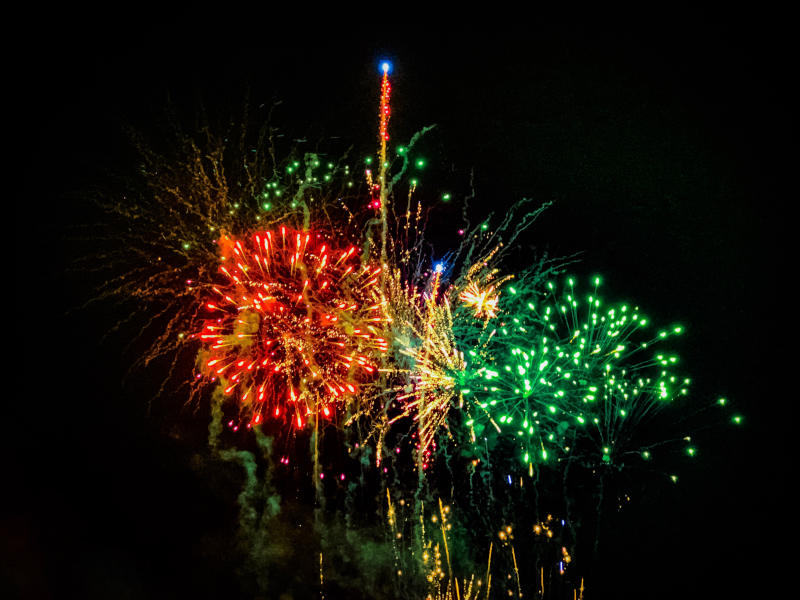 Last, our explorations of new year celebrations around the world end with the vibrant city of Lagos. The city is known for its pulsating nightlife, thanks to the large expatriate community and an abundance of trendy clubs. You’re sure to find the New Year’s Eve party you’ll definitely enjoy! Lagos certainly does not disappoint if you’re looking for fireworks, all-night parties and other exciting events.

First, the place to watch breathtaking fireworks displays is at Bar Beach, the venue for One Lagos Fiesta. The countdown actually begins on the 7th or 8th of December!

Many clubs, restaurants and bars in Lagos will be counting down to the new year as well. These include Quilox, Sip, Thistle Bar & Restaurant and Whitehouse.

There are more than 200 places to stay in Lagos. Choose from a variety of accommodation offers, such as hotels, apartments, holiday homes and more.

Now you have some of the most iconic new year celebrations around the world to check out! Where will you go?

Subscribe to our newsletter for amazing deals for these destinations and others around the world.

What new year celebrations around the world are you looking forward to? Let us know in the comments!

All information on this blog page was correct at the time of publishing and may change at any time without prior notice from the original source. Travelstart is not affiliated with immigration authorities or their application centres and will not be liable for loss or inconvenience arising from the use of information from this website.