Popularly known as the ‘Big Apple’, New York is most certainly a city that never sleeps. With an array of exciting things to do in New York – attractions to see and places to visit – you’ll be hard pressed to do it all in just a day. The city has a thriving social scene, combined with some of the most awe-inspiring and recognisable landmarks in all of the USA.

If truth be told, it is not an easy task to explore the bustling city in a day, but as far as ticking off some of those top New York tourist attractions are concerned, here are 10 things to do in New York in the search for an unforgettable experience.

1. Visit the iconic Statue of Liberty 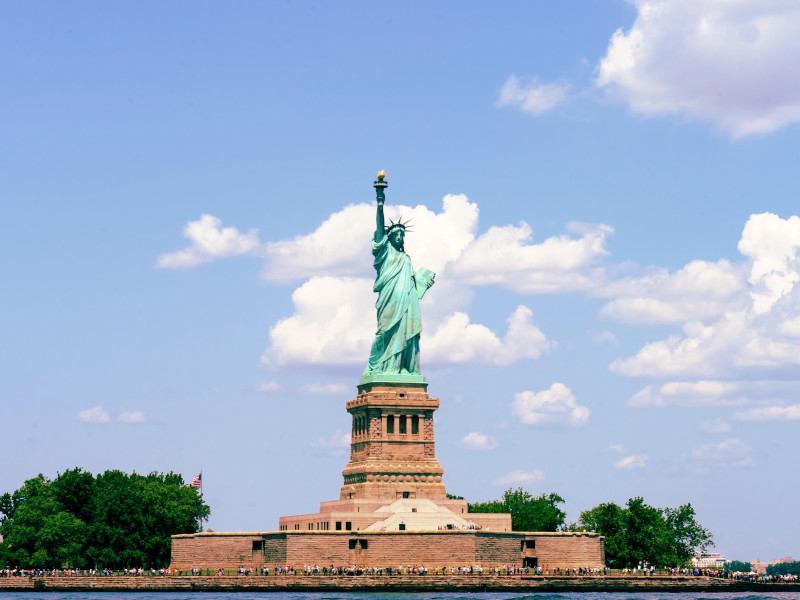 The Statue of Liberty is one of the most recognisable landmarks in the United States and there is no way you can pay a visit to New York without seeing the neoclassical symbol of independence. Whether you are catching a glimpse of Lady Liberty by ferry ride, or from a distance at Battery Park – from any angle in New York she stands out proudly.

2. Take a stroll in Central Park 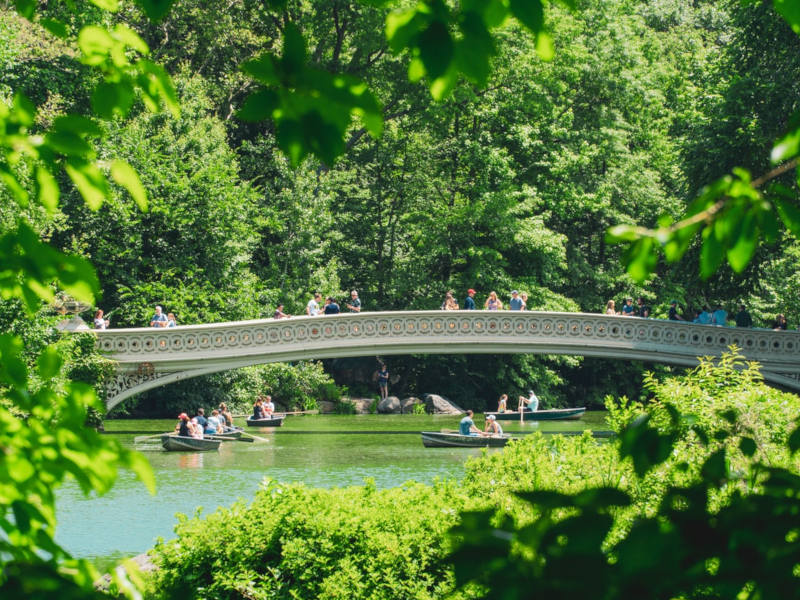 One of the best things about New York is the abundance of green spaces scattered across the city – worth every second of your visit, so take some time to recharge in nature. You can take a ride on the famous Central Park Carousel, dating as far back as 1908, or you can take in the beautiful view of the lake from the famous Loeb Boathouse.

The park measures in at a staggering 3,41 kilometres squared! The Central Park Zoo is home to many animals, including the likes of grizzly bears, sea lions, penguins, pandas and more. Central Park is a must visit for every tourist, and one of the most memorable of things to do in New York 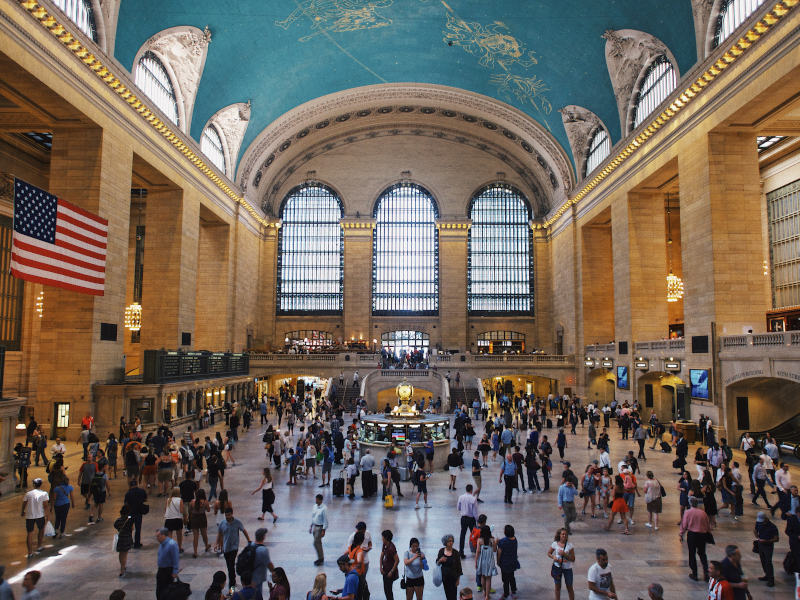 As North America’s third-busiest train station, this terminal registers most of the rush hours in New York City. Almost 800,000 people pass through Grand Central Station on a daily basis. Also known as the Grand Square Terminal, the iconic railway terminus is located in Midtown Manhattan.

Aside from the enormous volume of commuters that make use of this terminal, it’s a masterpiece in its own right – a facade decorated with sculptures, astronomically adorned ceiling, “Kissing Room” and the famed meeting point beneath the Grand Central clock.

4. Explore the Metropolitan Museum of Art 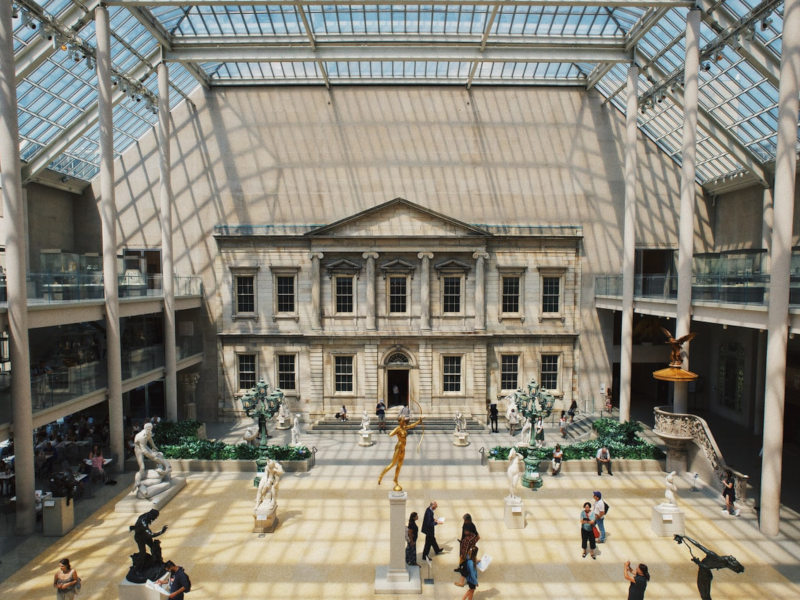 Colloquially known as the ‘Met’ and described as one of the best art museums in the world, the Metropolitan Museum of Art is located across three sites in New York City. It is home to artefacts dating as far back as 300,000 BC. The museum features exciting events and activities on a monthly basis. Enjoy amazing performances, tours, lectures and workshops that take place in the museum. Open 7 days a week, learn more about the Met Museum by visiting the official website. 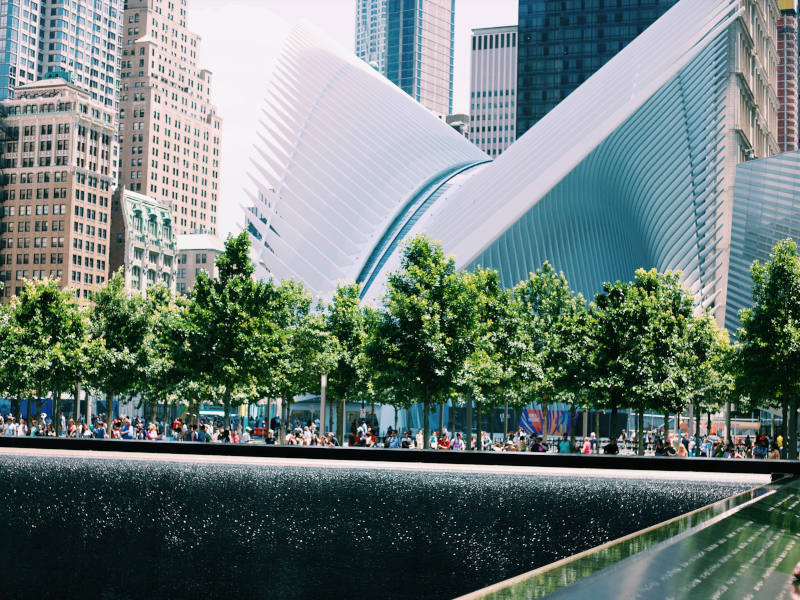 The footprint of the world trade centre has been converted into the 9/11 Memorial and Museum. The memorial serves as an institution – a place to pay respect and comprehend the events of September 11th and its global significance. The Museum displays a collection of artefacts connected to the events, presenting a story of loss and hope. This landmark has a descending pool, engraved with all the names of those who died on that notorious day. Visit the 9/11 Memorial, to learn more about a place that holds lasting memories.

6. Get a glimpse of the Brooklyn Bridge 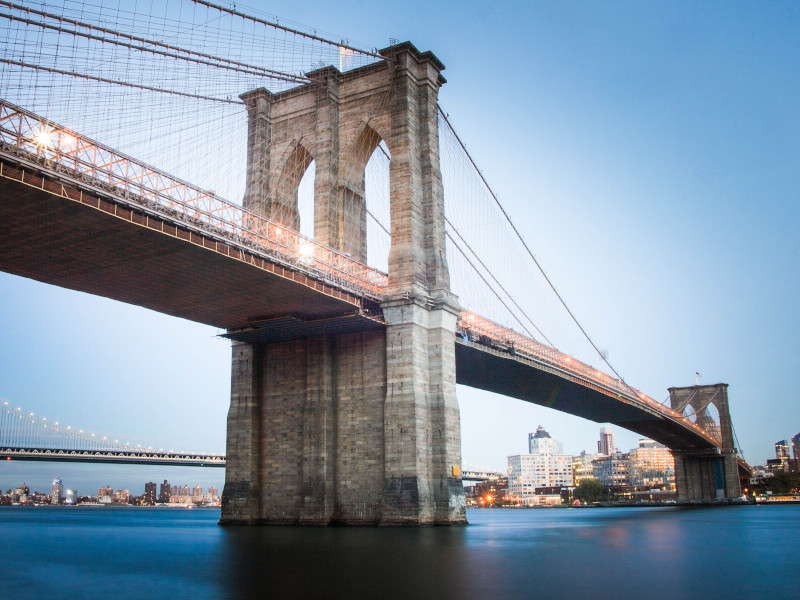 The iconic Brooklyn Bridge is one of the oldest bridges in the United States. Dating back to 1883, this bridge has seen many historic events since it’s construction and holds a lot of significance. It has a pedestrian path where you can walk, jog, run or stroll across, while you catch breathtaking views of the city and take in New York’s beautiful skyline. Access the bridge by way of a subway ride and short walk, before using the underpass on Washington Street. 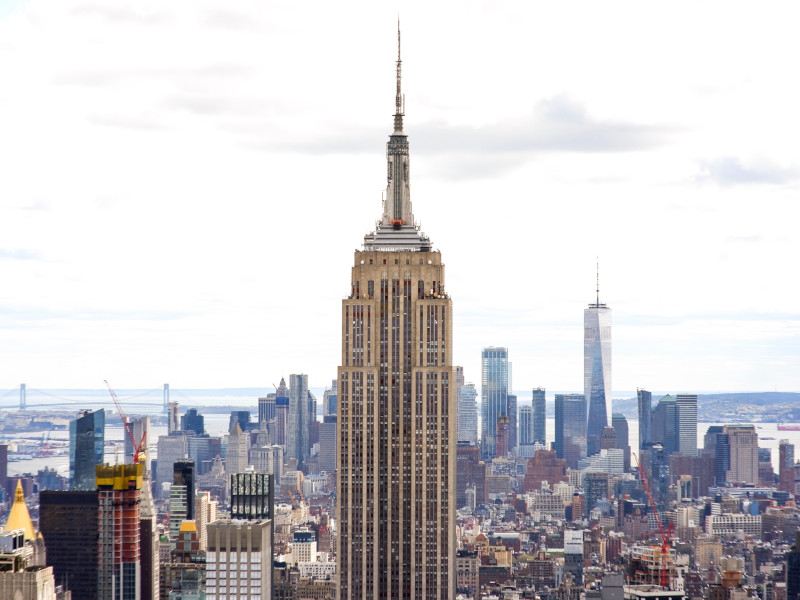 The Empire State Building is known for spectacular views and is New York’s most popular observation deck. The skyscraper is comprised of 102 stories and located in Midtown Manhattan. If you have the opportunity to visit, it is one of the best things to do in New York. The view from the rooftop is beyond description, where you will see stunning skyline vistas of New York City. Throughout the year, the iconic building is illuminated with coloured lights to mark important events and occasions. 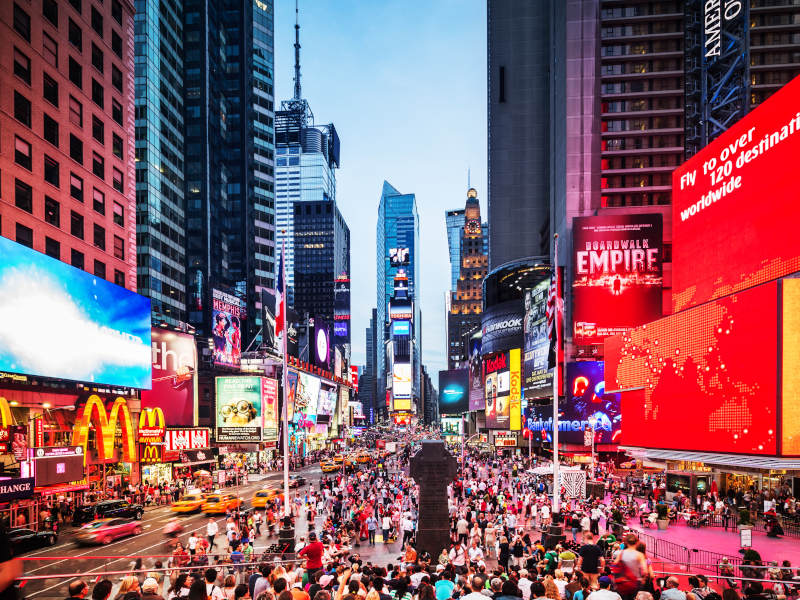 Times Square is one of those unmissable New York attractions, bustling with crowds and street activities. An urban area mostly flanked by elevated buildings, it’s encrusted with gigantic, eye-catching advertising boards, all jostling for your attention. This is the part of New York that never sleeps. Movie premiers are shown on big screens and Broadway shows abound. You can also enjoy streetside shopping and wine and dine at remarkable restaurants at any time of the day. 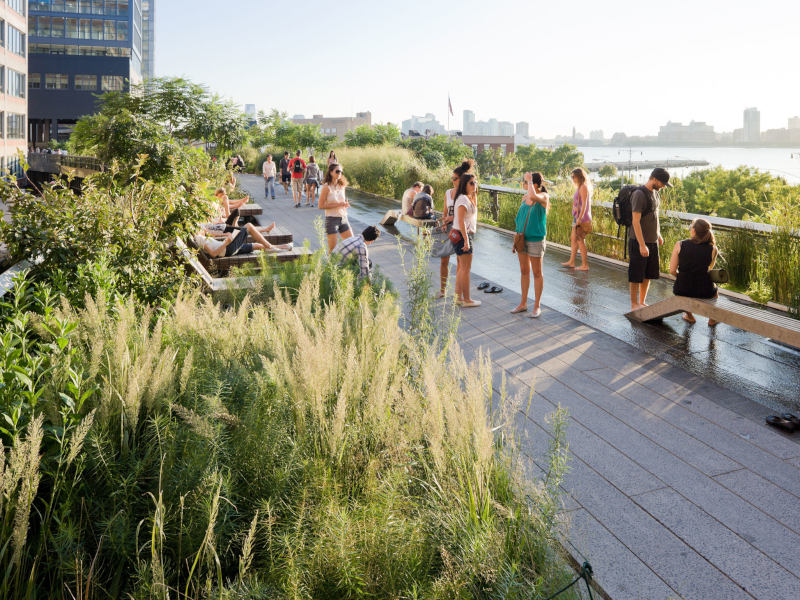 Image courtesy of The High Line

Stretching more than 2 kilometres, this linear park is constructed on a historic freight line, elevated above the streets of Manhattan. The several varying gardens boast numerous species of plants that bloom and change with the seasons. Meandering along the paths and waterways will give you a lovely view of the Hudson River and is one of those more unique things to do in New York. 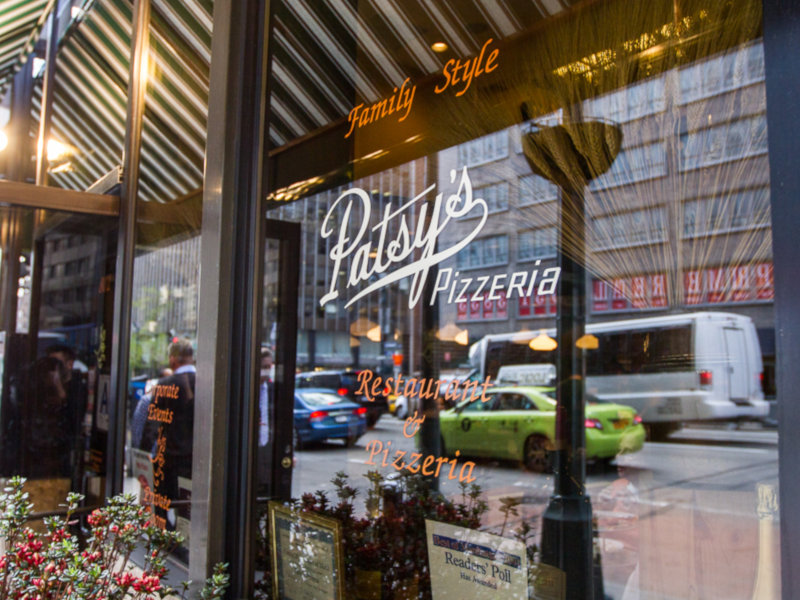 Visiting New York without indulging in pizza will leave you feeling incomplete. Pizza spots are scattered around the streets of New York – spend a New York minute devouring a slice of city life. Great places to visit are Rubirosa on Mulberry Street, Lombardi’s Pizza on Spring Street, John’s Pizzeria on Bleecker Street, Di Fara Pizza in Brooklyn and Patsy’s Pizzeria on 2nd Avenue.

If you are spending some time in the Big Apple, make sure you don’t miss out on these top things to do in New York and highlights of the city. Sign up to our newsletter to be the first to discover more about this sleepless city and upcoming specials for cheap flights to New York.