As if turquoise seas weren’t stunning enough, pairing them with blush-coloured sands makes it even more astoundingly attractive, and with only a few pink sand beaches around the globe, the scarceness of experiencing these adds to the allure that they hold.

From Indonesia to Bermuda, Greece to Tahiti, read on to see which undeniably blushing shorelines are worth adding to your bucket list.

These incredible stretches of sand get their lovely cotton-candy hues from mixing with thousands of broken coral pieces, shells, and calcium carbonate materials that are left behind by red microscopic organisms called Foraminifera.

The underwater world is no less fascinating. Snorkelling in each of these destinations will reveal a beautiful panorama of healthy, colourful underwater gardens. Various kinds of amazing sea biota can be found here, including thousands of different kinds of fish and a variety of sponges. 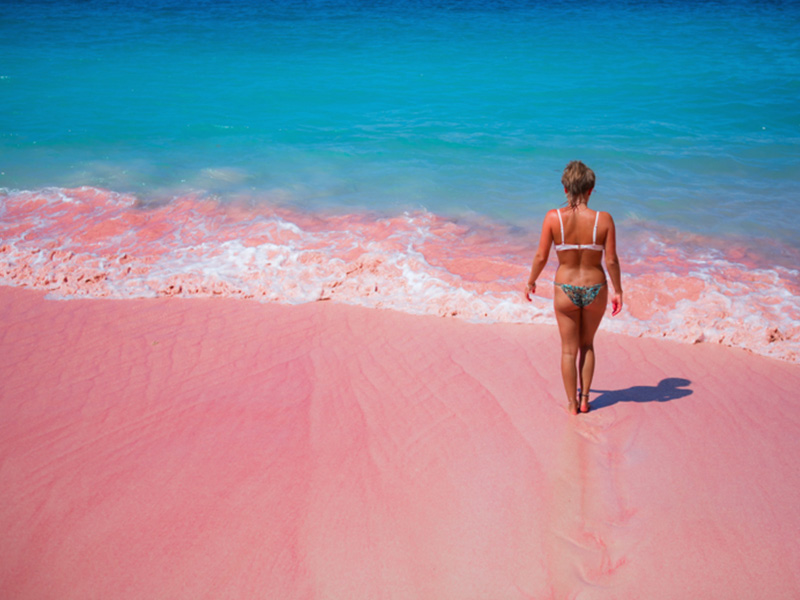 Catching a glimpse of the island’s eponymous Komodo dragons isn’t the only reason you should visit Komodo National Park. It also happens to have two seriously beautiful pink sand beaches.

The site of these makes it all worth the effort of heading off-the-beaten-track from the more touristy destinations of Indonesia. The first beach, which locals call Pantai Merah, is situated on Komodo Island and is surrounded by rusty-red volcanic hills and gorgeous, lush forests. 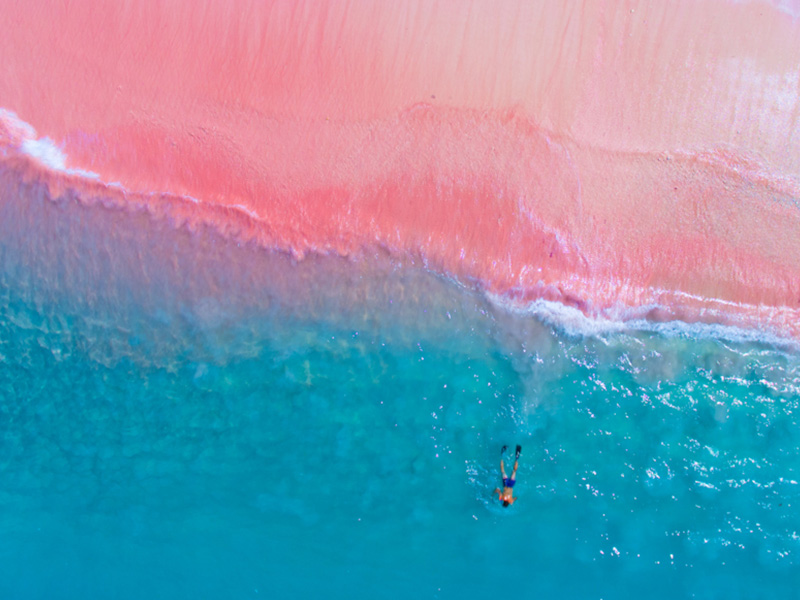 Despite the fact that you can only see the pink colour at a certain time of day, you won’t find another incredibly unique spot like this. Except of course Indonesia’s off-the-tourist-trail hidden gem – Serai.

If you think that this country’s first pink beach is off-the-beaten-track, the beach on Serai Island is further off from civilisation.

It can only be reached by boat, which anchors a few metres from the shoreline to protect its spectacular coral reef below. Don’t let the idea of having to swim to the shore put you off though. The snorkel across is incredibly picturesque and boasts a colourful underworld. It is one of the best reefs in the region and if you are lucky, a few manta rays may sweep past you. 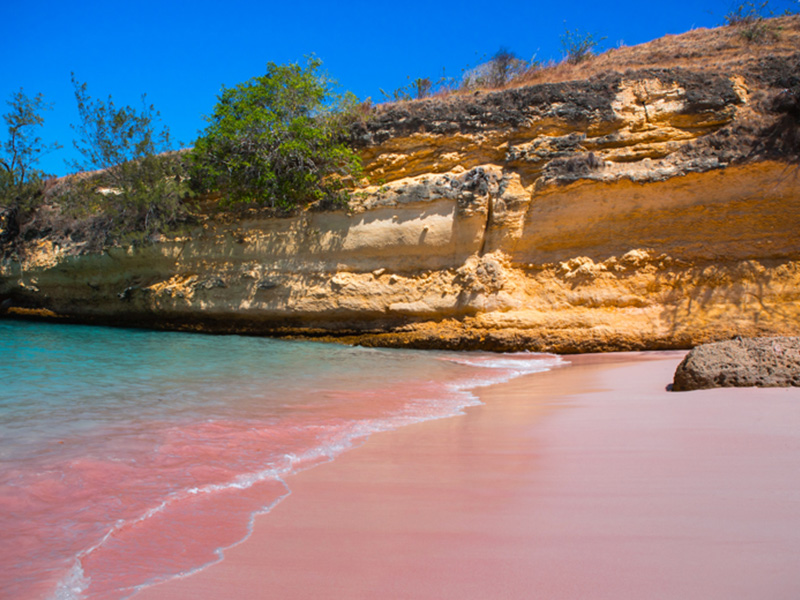 Onshore, the islands blushing pink beach is contrasted with its lapping, clear, turquoise waves and blue skies. And unlike the other pink beach on Komodo Island,  where you can only see the pink colour at a certain time of the day, Serai flaunts its colours for a full 12 hours. It is truly a spectacular sight.

More so, pink is not the only colour you will see. The island is a marvel of all the colours of the rainbow. The sandstone cliff overlooking the beach boasts a shade of limestone yellow and the trees that surround the beach are lush green. 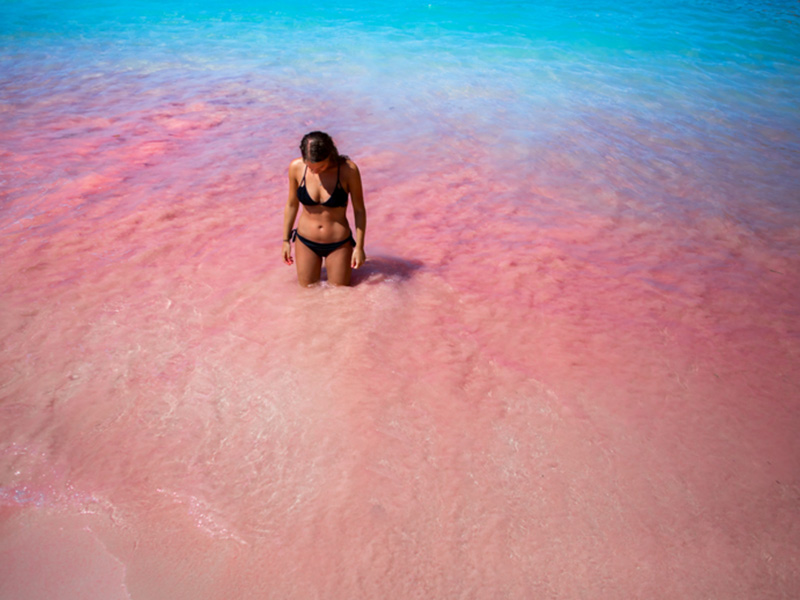 We don’t know about you, but swimming with giant pigs on one of Bahamas’ 365 islands has made it to our bucket list!

If it is on yours, why not combine this activity with a trip to Harbour Island, the home of the Bahamas’ very own pink beach. This three-mile-long pristine beach is on a thin peninsula at the northern end of the Bahamas.

Divers are all too familiar with this beach in particular, for its blushing shade bears evidence of the incredible coral reef that begins at the lapping waves.  Its gentle seas, shallow reef-protected waters and spectacular marine life have made this one of The Bahamas’ top dive sites.

It’s not just the marine life that attracts them though. They particularly love exploring the rock walls beneath that connect Eleuthera and Current Island.

The four-star beachfront Pink Sand Resort has positioned itself nicely here, with unrivalled views out onto the ocean. The island’s tropical surroundings, ocean views, and subtle breezes make for a truly tranquil getaway. 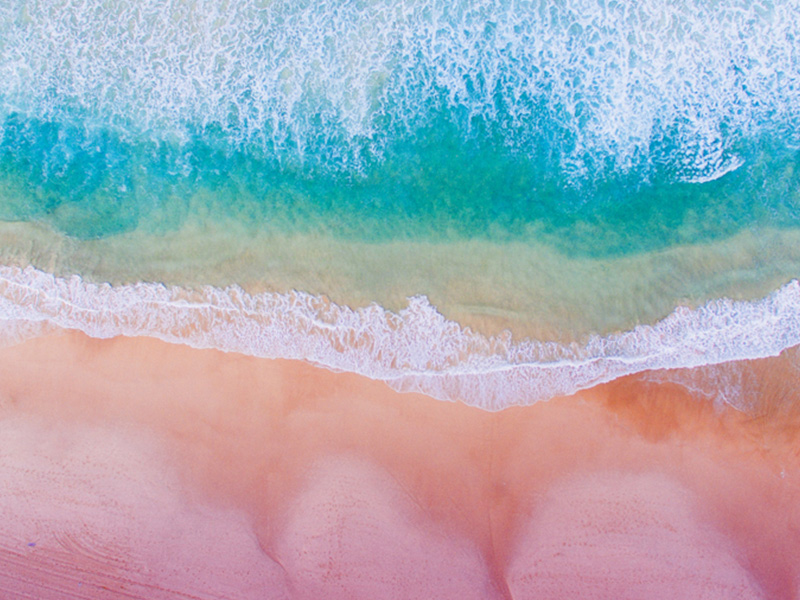 Greece is almost always considered as an exotic destination. On the island of Crete, turquoise waters and pink sands unite on Elafonisi Beach and in Balos Bay.

Eladonisi Beach is a remote oasis on the Southwestern side of the island and as its Mediterranean turquoise water flows in and out, interesting shades of the sand appear. In some areas, the sand is crisp white, while in other areas it is quite rosy. This multicoloured phenomenon is fascinating to witness.

To add to this beaches charm, there is an abundance of natural beauty in every direction you look. The beach is surrounded by 110 different plant species, small coves, extraordinary shells, and incredible rock formations.

More so, part of the beach is connected to the mainland and can quite easily be reached on foot as the waters between the two islands are just that shallow. Come low tide, a sandbar provides access to an island with a small chapel.

If these aren’t reasons enough to make you add this to your bucket list, then you will quite appreciate the fact that it is an all-year-round destination thanks to the region’s balmy temperatures. 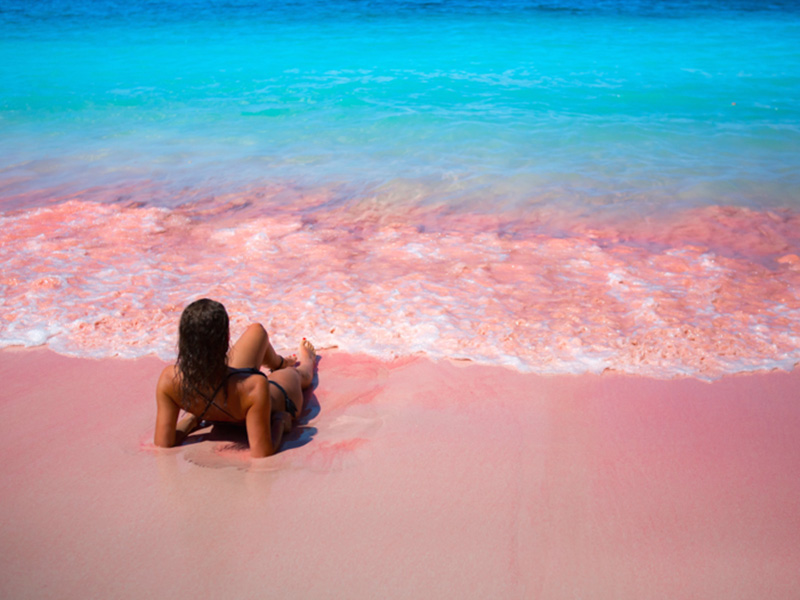 Balos Bay is one destination that will just leave you stunned and offer you the kind of tranquillity that you are longing for. Just like Elafonisi Beach, this beach too is multicoloured with sections of white sand and other sections of pink sand. The beach is beautiful and its clear turquoise waters often promote regular visits from sea turtles and monk seals.

The beach section can be reached by driving a 10-kilometre dirt road or taking a ferry from the mainland.

Bermuda is one of the only countries that can claim the plentiful amount of pink sand beaches. 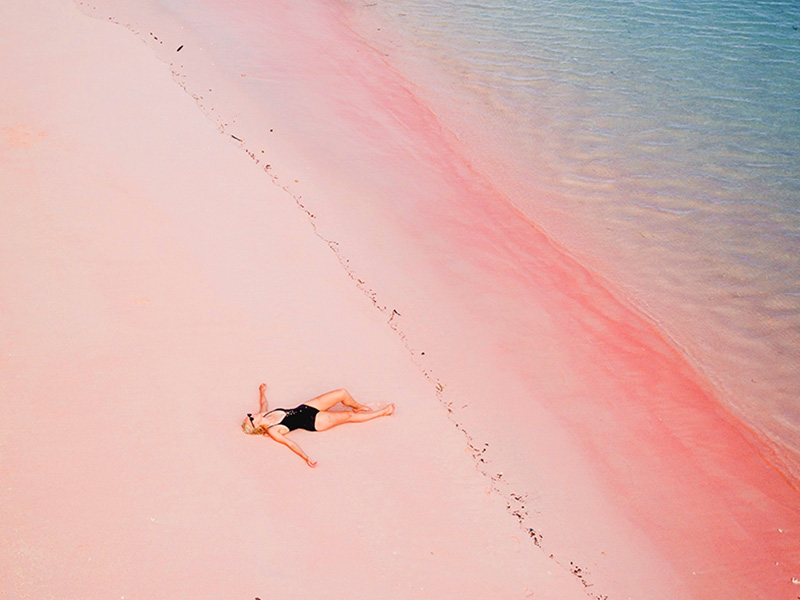 A favourite is Horse Shoe Bay Beach, located along the southeast coast of the main island. You will be drawn to this rugged coastline because of its contrasts. Its salmon colour sand is made delightfully beauteous against, not only its azure Atlantic waters, but also the natural limestone cliffs that encompass it.

Be sure to get to this beach early as it can get incredibly crowded. If you are looking for a less crowded alternative, you should consider Elbow Beach. It is equally as beautiful.

You will also really appreciate it for its incredible underworld that promotes incredible snorkelling opportunities. The offshore coral reefs prevent the beach from getting any waves, keeping it calm for you to view the many colourful fish as they glide past the remains of an impressive shipwreck that lies close by. 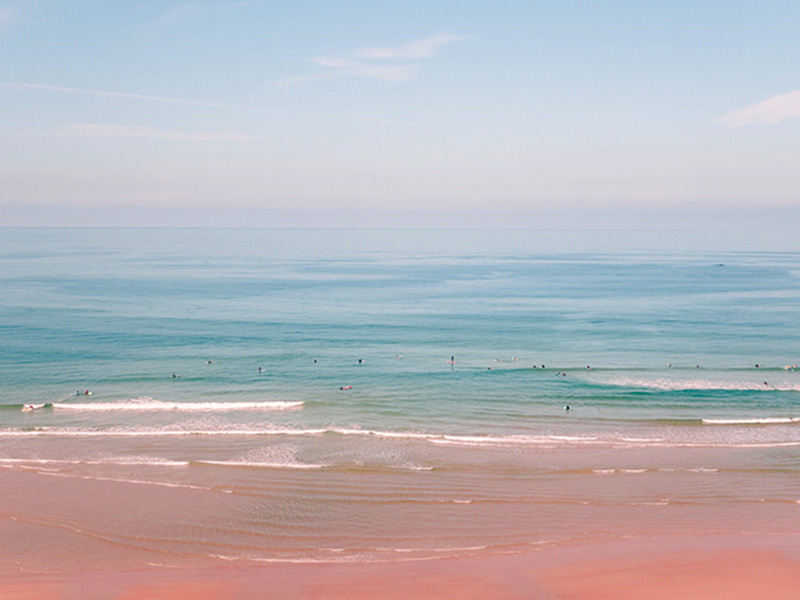 Powdery beaches and swaying tropical palm trees are the quintessence of a typical Caribbean island vacation. Barbuda, one of the three-island states in the north-eastern part of the Caribbean, is stereotypical of just that, except for the fact that it, unlike other popular islands, experiences little tourism and has rose-tinted shorelines.

For an island of its size (only 62 square miles), it boasts an impressive 17 miles of pink beaches, most of which are often completely secluded.

In addition, this natural paradise’s geographical position makes it incredibly attractive as well. The island overlaps both the Atlantic Ocean that has rougher seas as well as the Caribbean Ocean, that offers calm, turquoise waters.

The infusion of these two seas results in wildlife-rich waters and makes for an incredibly attractive snorkelling spot.

The Philippines is one hell of a happy place. It is best known for its friendly hospitable people, days-on-end sunshine and undeniably gorgeous beaches. It will never fail to amaze you.

There is no shortage of gorgeous places to visit, and each of its 7,100+ islands offers distinctly different experiences. In fact, one particular island stands as a testament to the uniqueness that prevails. The uninhabited island of Great Santa Cruz is the only island where you can experience the country’s famous clear turquoise waters lapping at a pink shoreline.

The only way you can visit here is by boat that departs from Paseo Del Mar. In an effort to protect the beaches pristineness, the number of people per day allowed to visit is limited. The main reason for this is that marine life has decreased and the coral reef has previously suffered due to illegal coral mining.

So, if you are planning a visit, you will have to register at the tourism office on the nearby island and sit through a short orientation that will put you in the know on how to protect this natural environment. 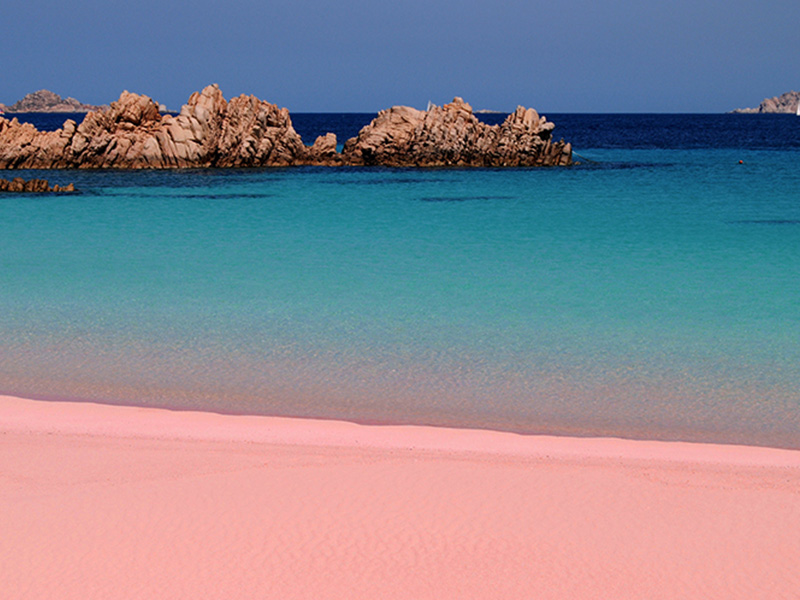 The last of our rose-tinted shore series is located in Italy on Budelli Island. This isle north of Sardinia is only inhabited by one person, and known locally as “Spiaggia Rosa”.

Despite its lack of residents, it has been put on the map by the producers of the 1964 movie, Red Desert. Due to national authorities’ efforts to protect this particular beach, you, unfortunately, cannot dip your toes into these waters. Instead, the beach can either be admired from the comfort of a boat, or from a nearby cliff that overlooks it.

The beach is bordered by granite rocks and deep blue water and if you are visiting, keep your eyes peeled for whales and dolphins as they often frequent the area. 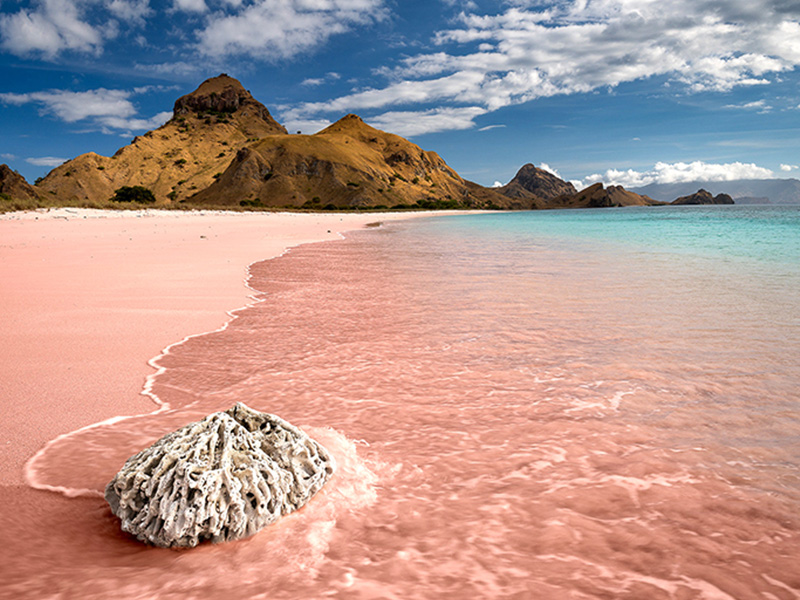 We hope you have enjoyed this collection of rare phenomenons. In an effort to promote sustainable tourism, we like to encourage you that if you find yourself on any of these shores, to do your effort in assisting the preservation of these unique gems.

Have you visited a pink beach before? Share your experience below.