The Ionian group of Greek islands are among the most loved of all of Greece’s 6,000 islands. They have become famous for their calm turquoise seas, fine white sand beaches, rugged shorelines, soaring forested mountains, and their rich history.

There are seven islands in the group that form a chain along the west coast of mainland Greece. Each of them has its own distinct landscape, history and cultural identity and surprisingly a lot of them have strong Italian influences.

In this post, we will be exploring two of these islands – Kefalonia and Zante and all the attributes that make them unique.

There is no doubt in our minds that you will just fall in love with these islands. 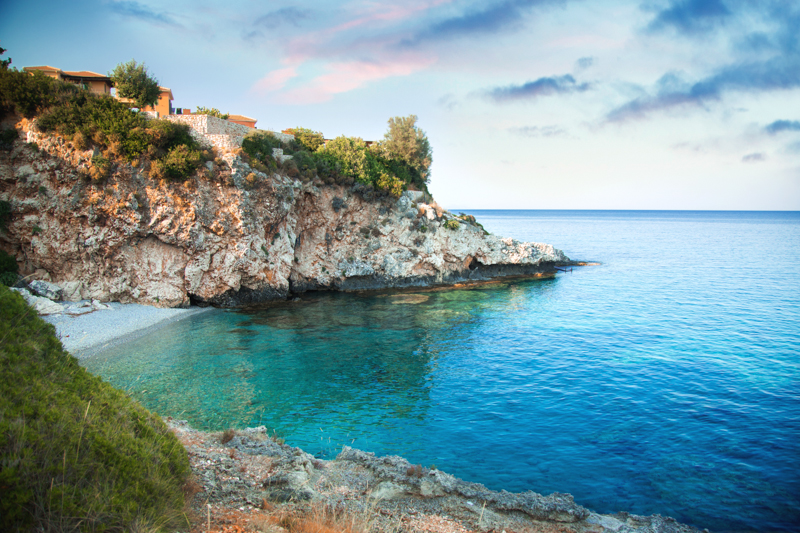 Kefalonia, or Cephalonia, is the largest island in the Ionian Sea and the 6th biggest island in Greece. It rivals the likes of Corfu and Mykonos and is becoming one of Greece’s main travel pearls that is much photographed and much talked about by locals and foreigners alike. 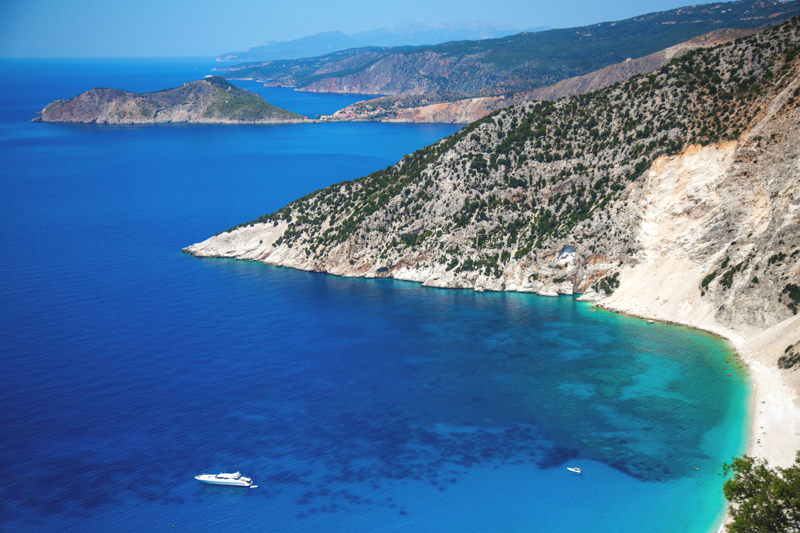 It is famously known as Captain Corelli’s lost paradise in the 2001 film Captain Corelli’s Mandolin. Its natural and cultural treasures are in abundance and the island has a rich 12,000-year-old history. Soaring mountains, rugged cliffs, lush green vegetation and picturesque villages all come together to give this island a fascinating atmosphere. 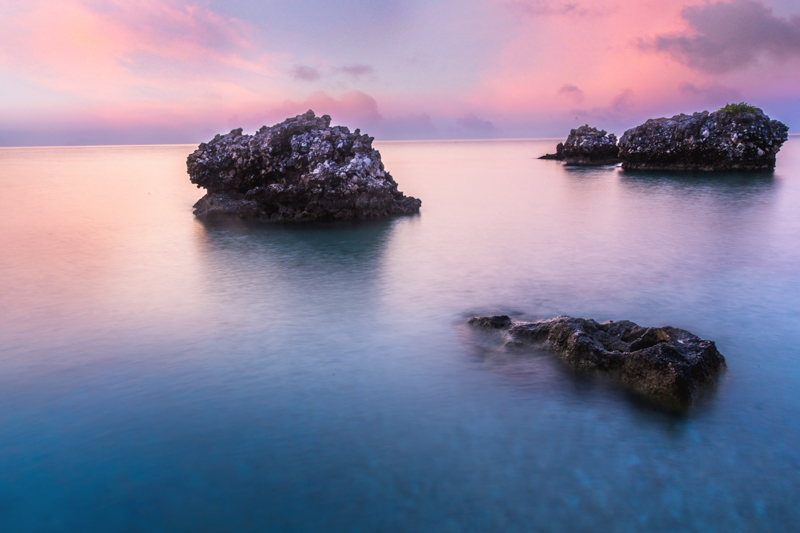 Not to mention the fact that it has some of the most dazzling beaches boasting sparkling azure waters in the Mediterranean. Its sheer beauty is bound to leave you in awe. 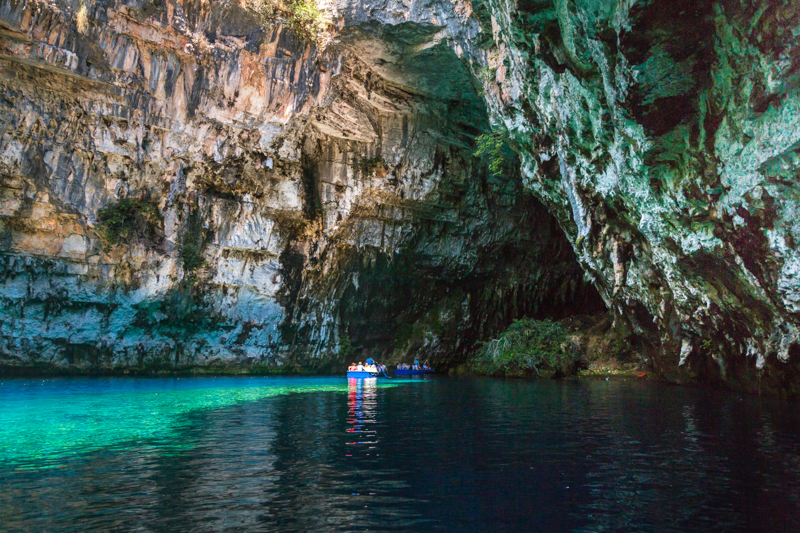 Also known as the “cave of Nymphs”, the Melissani Cave is a marvellous natural wonder that will leave a memorable and lasting impression on you.

This B-shaped lacustrine cave is 3.5 kilometres long, 40 metres wide and 36 metres high, and is surrounded by trees and forests. Inside, you will find a lake that is illuminated by light filtering down from above. 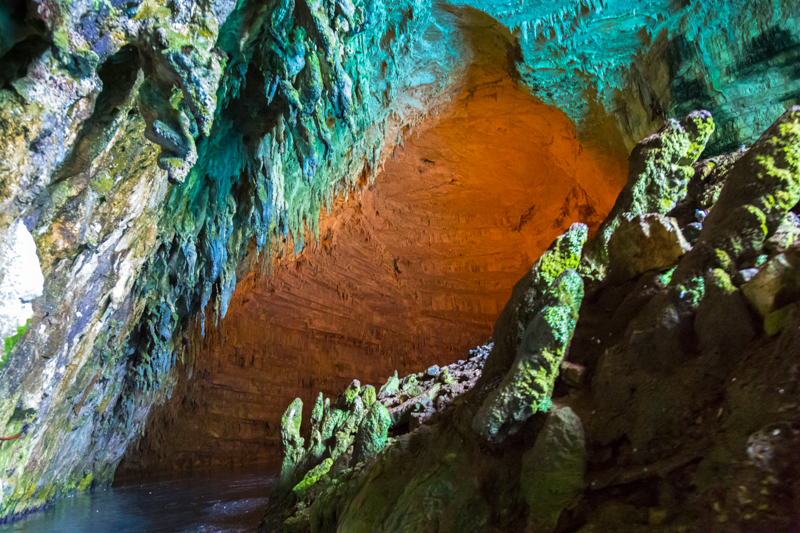 When the sun is right overhead at noon, the sunlight hitting its turquoise-blue waters creates a magical illusion and the honey-like brown walls turn all shades of blue. There is also a small island inside and a second chamber that is dark and ominous covered with countless stalagmites.

You can choose to view the cave from two viewpoints, either by admiring it from the balcony above or by taking a guided boat trip to marvel at its beauty up close and experience its crystal clear waters. 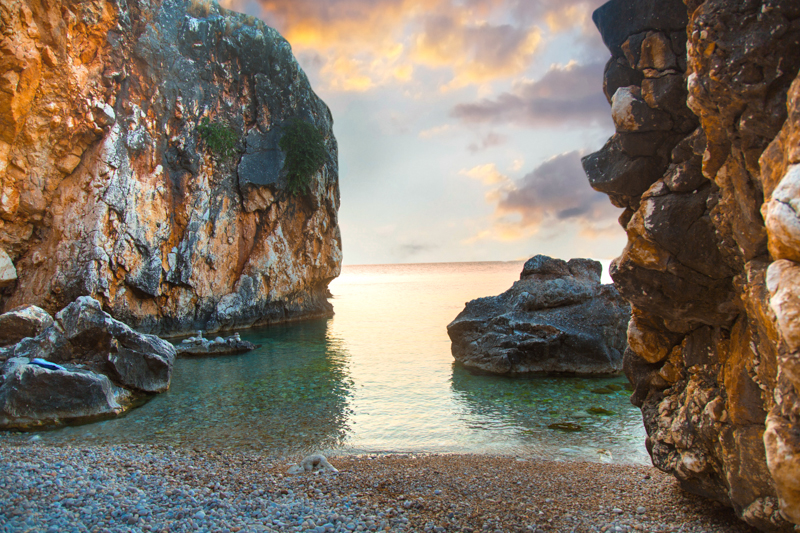 There is no denying it, Kefalonia is an exotic paradise with breathtakingly beautiful beaches, most of which are amongst the most picturesque of all in Greece. Its coastline stretches for 254 kilometres and a wide variety of different types of beaches can be found. You will love that some beaches have long stretches of white sand and are covered in dense vegetation while others have towering rugged cliffs and even red sand. 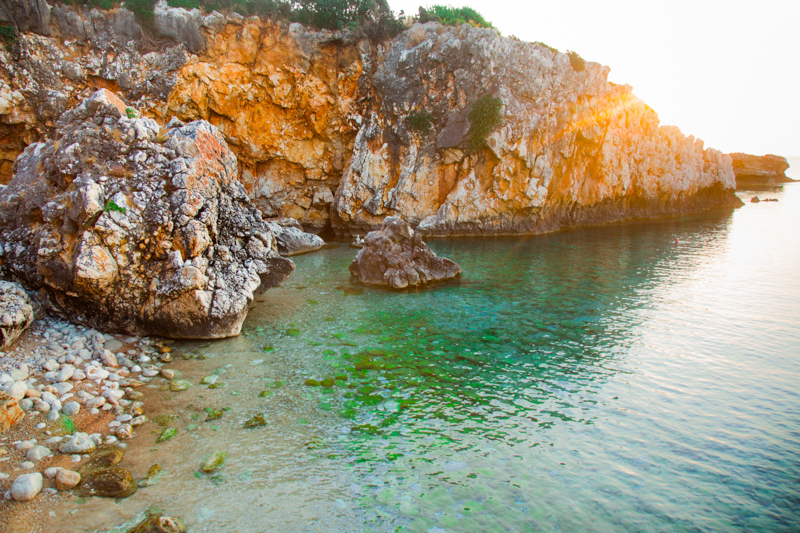 Near Kefalonia’s capital, Argostoli, you will find the island’s most frequented beach – Makris. Its crystalline bay with golden sands is surrounded by dense vegetation, tall pine trees and rock formations. During summer it is a well-organised tourist resort with sun loungers and umbrellas for rent, a beach bar and a water sports centre. 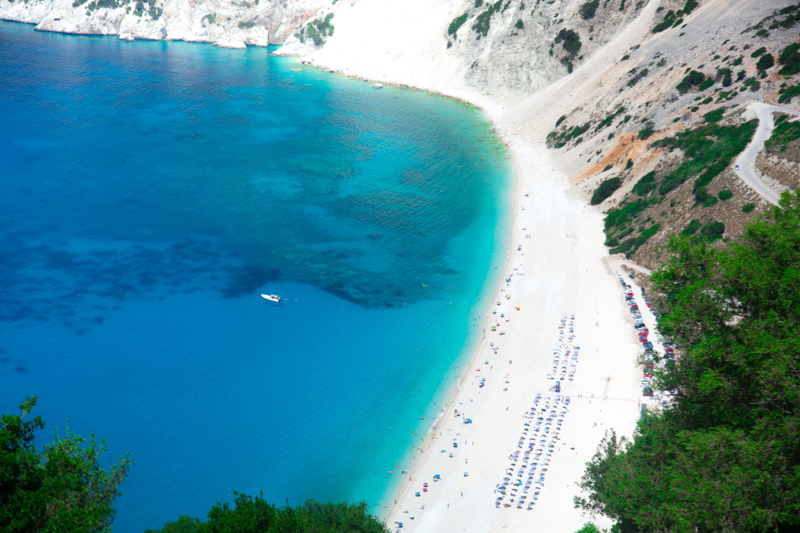 Another popular beach is the beach of Skala on the south side of the island. This white sand beach stretches for 2.5 kilometres and has been awarded Blue Flag beach status. The water is shallow and crystal clear and the beach is surrounded by dune-like hills and a small forest. It is the perfect spot for the entire family. There is a variety of water sports that you can participate in, as well as various beach bars that will provide you with plenty of excitement. 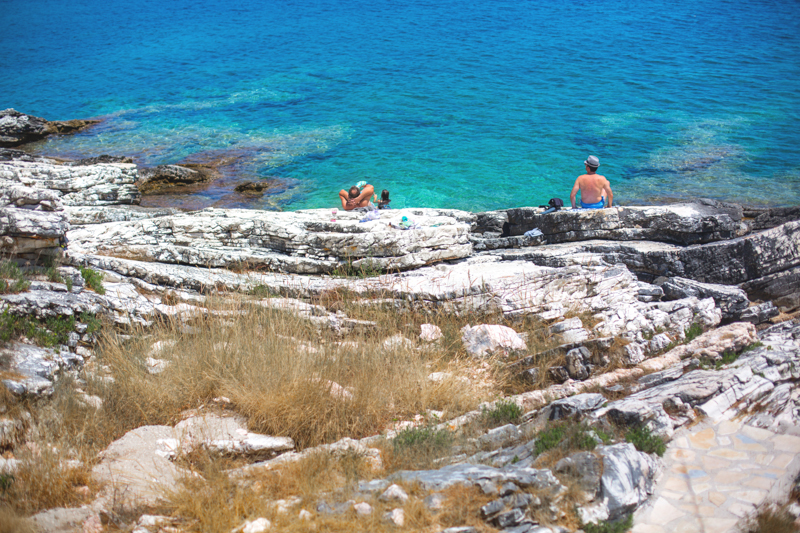 1.5 kilometres from the village of Fiskardo you will find Emplisi beach. This is one of the island’s popular beaches, but not for its white sands and shallow waters. In fact, this beach is pebbled, carrying its own charm and has deep waters. Once you discover this beach’s exotic atmosphere you will feel like you’ve just stepped onto a completely different island. 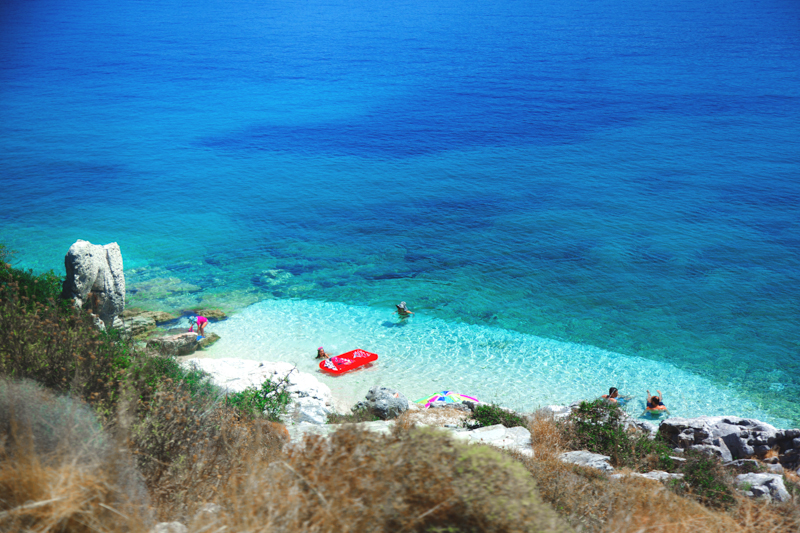 Whilst there are no tourist facilities (like deck chairs) available here, wide and flat horizontal layers of rocks protrude out to the sea. These make for great sunbathing spots amidst the enchanting lush greenery and high trees that surround the beach. 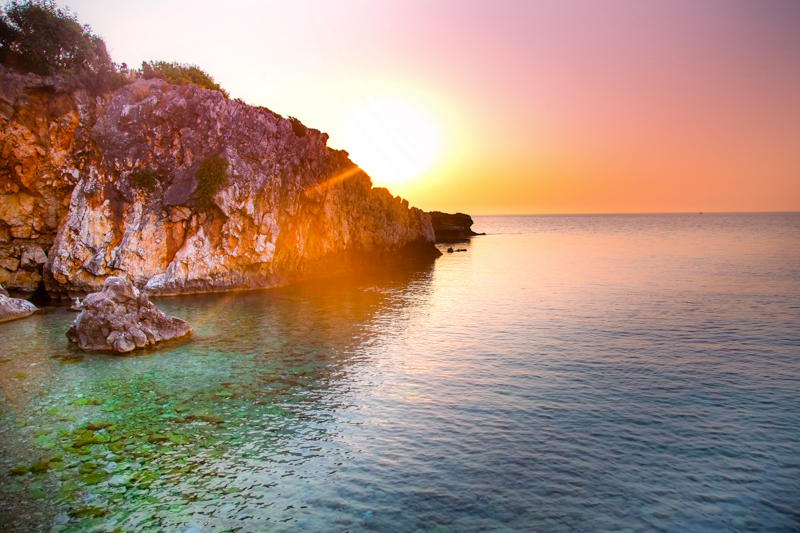 Now, this is a beach that makes for a great sunset spot. This curved bay is located in the beautiful peninsula of Paliki and is surrounded by mountains. On the southern part of the same bay, an untouched paradise awaits you, and you can enjoy an even better view of the sunset in complete isolation. 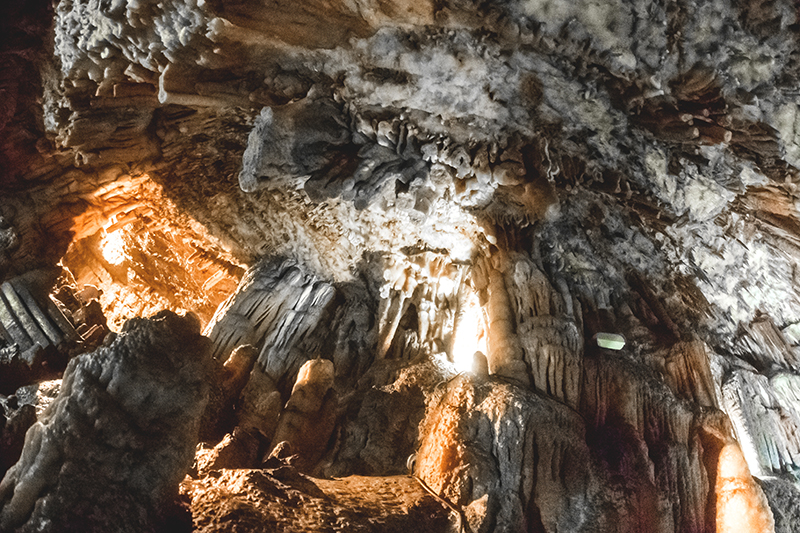 Close to Melissani Lake, you will find the impressive must-see Drogarati Cave. It was discovered 300 years ago when a strong earthquake caused a collapse that revealed the cave’s entrance.

Inside this cave, you will find remarkable formations of orange and yellow stalactites and stalagmites that have been created by lime deposits in the water that filter through the bedrock above them. According to archaeologists, the cave is 150 million years old and these formations are estimated to grow at a rate of 1 centimetre every 100 years. 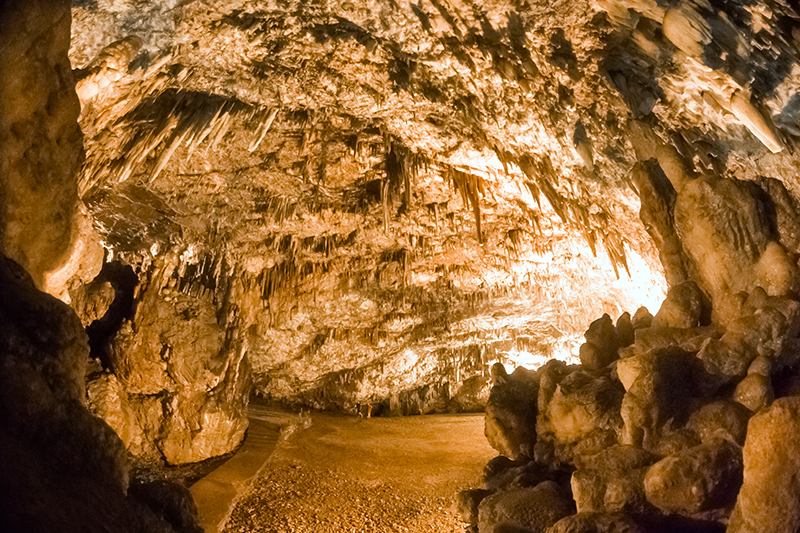 The cave is about 60 metres deep and is divided into two parts. The first part is called the Royal Balcony and the Chamber of Exaltation. Here, you can marvel at the natural platform of stalactites that beautifully reflect the light. The second part is not accessible, but scientists have discovered this extension and believe that it is connected to other sea caves. 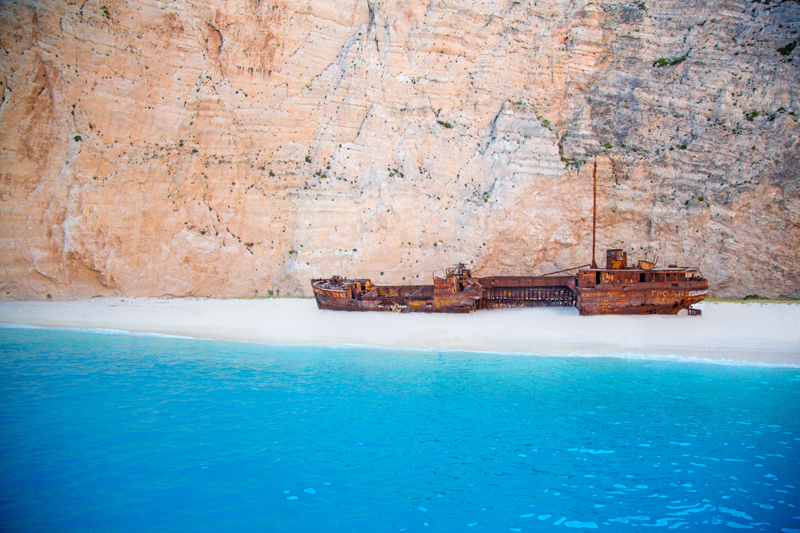 The Italians call it “Zante”, the Greeks call it “Zakynthos”. This is the third largest of the Ionian islands.

It is Kefalonia’s nearest island neighbour to the south and, although it is large, it is still small enough to be navigated around by car. Everything about it says, “sit back, relax, and stay a while”, and when you have spent some time soaking up the sun on its splendid beaches, you would totally agree.

Although you won’t find the history of Crete, the cool architecture that’s famous on Santorini, or the culture of Corfu, Zante has its own unique offerings. 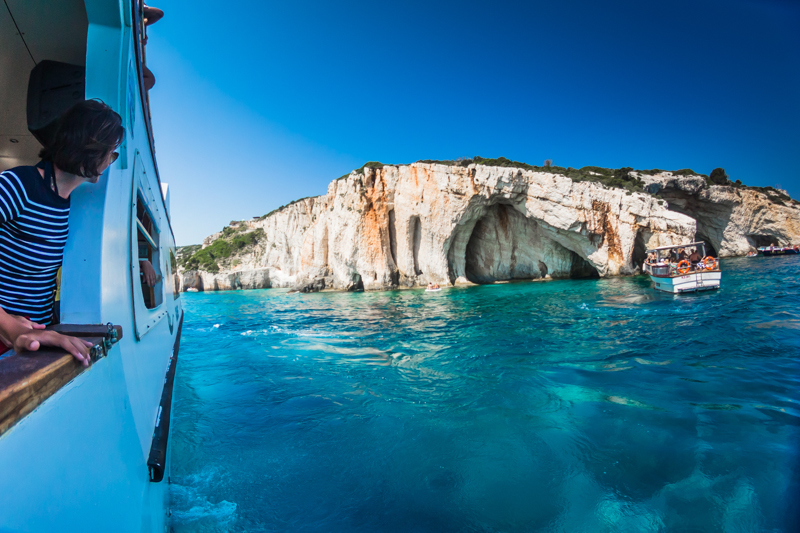 For many, the main drawcard to this island is the beaches, but despite the fact that it is rich in beauty, it is also rich in tradition, both historically and culturally. In fact, its history dates back to 1600 BC. And when you set off to explore the island beyond its beaches, you will discover nature at its finest. The island has a rich diversity of landscapes, picturesque villages and a hilly interior. Its coastline is jagged with tall chalk-coloured cliffs standing stark against the beaches.

The island’s climate is also something you would just love. Due to its geographical location, Zante enjoys a typical Mediterranean climate. Long hot, sunny summers and mild, rainy winters. It enjoys 3,000 hours of sunshine each year. 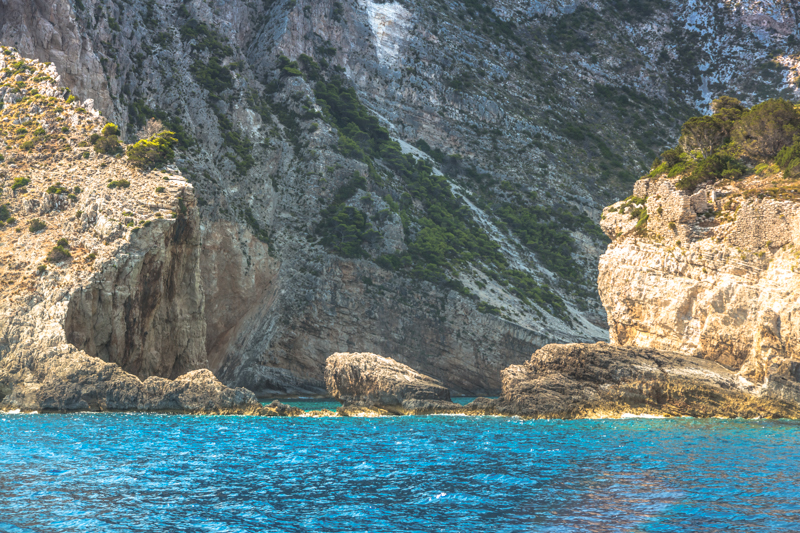 Zante is abundant with nature. It’s for this reason that the Venetians called it the “Fiore di Levante”.  It translates to the “Flower of the East” and bears description to the island’s endless meadows of carpeted flowers. Cherry-red bougainvillaeas, posies and daisies are a few of the flowers that bloom here year after year.

The island is also greener than any of the other Greek islands, which could be attributed to the high level of rainfall that the island experiences in the winter. The ground is fertile and favourable for the growth of olive trees, wild figs, citrus trees and vines. In fact, Askos Stone Park has more than 200,000 trees, plants and shrubs that are endemic to the island.

Grape trees are also deeply rooted in this fertile land. As a result, you will find many vineyards, some of which date back centuries.

In addition, the island has many vantage points along the outskirts to take in some breathtaking views of the peninsula. For example, the cliffs of Keri and Kryoneri draw many people for its amazing sunsets. It’s really hard to beat views like these. 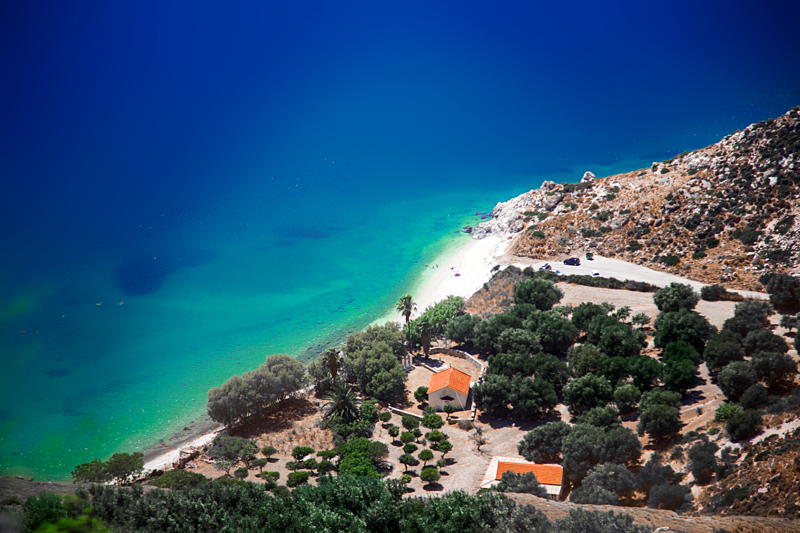 Zante’s cavalcade of beaches has been gracing Greek tourist brochures for years. In fact, some of its beaches are rated amongst the top ten in the world.

Each one is more magical than the next with some flaunting rocky seafronts while others are the epitome of all-white sand beaches. 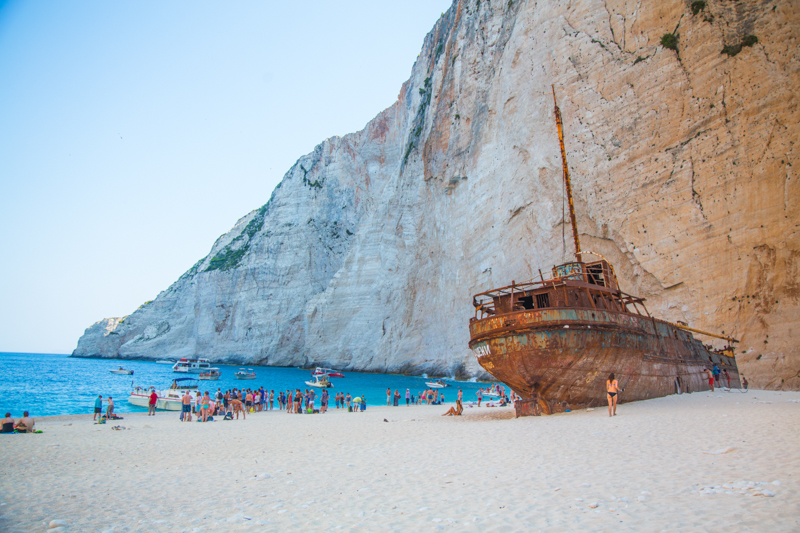 You may recall having seen pictures of the chanting panoramic view of Navagio beach from the cliff just above it. This postcard-perfect beach has a long-standing history of being the symbol of the island.

A rusty shipwreck rises above the powdery white sand that it rests on. Its colour is uniquely contrasted with the 900-feet-tall chalky white limestone cliffs that encapsulate it, creating an isolated sandy cove around it. It is completely secluded from the rest of the world and the only way you can access this isolated sandy cove is by sailing across its out-of-this-world-turquoise waters. The wreck is a unique site to witness and seeing that it had gotten stranded due to allegedly smuggling of cigarettes and drinks back in 1937, it is nicknamed “smuggler’s cove”. 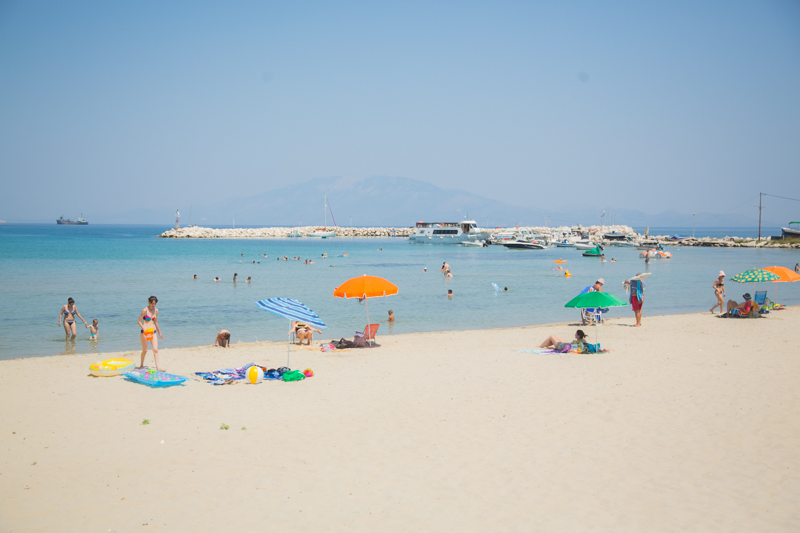 Similarly, Xigia Beach is equally as beautiful, having the same traits as Navagio baring the shipwreck. It is a secluded cove that is guarded on three sides by large cliffs and is home to a hot sulfur spring. Not only is the water all shades of blue, but it offers an incredible sense of seclusion from the outside world.

Laganas Beach is the biggest one on the whole island and stretches from Kalamaki Beach to Cameo Island. It has shallow waters, fine sands and plenty of taverns stretching along the beach.

Another superb beach is Tsilivi. It is a scenic location that boasts an array of water sport-based activities, glorious sunsets and a happening nightlife.

Other beaches to visit are the tranquil Porto Roma and Gerakas. Pristine white sands slope gently into the sea here. 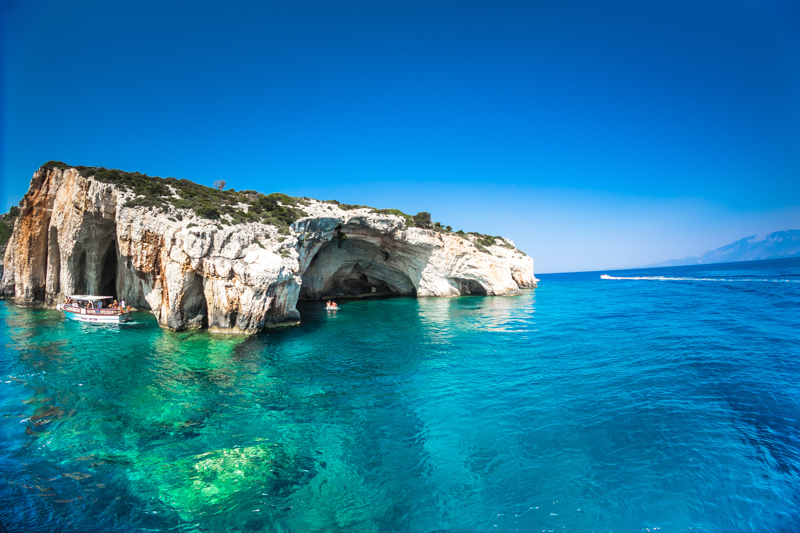 The coastline of Alonnisos is wild and rocky, and home to the island’s famous blue caves.

You will find this collection of white limestone caves truly impressive. As the name suggests, the water surrounding it shifts into an endless spectrum of various blue hues. It ranges from a deep blue azure colour to a shade of translucent turquoise depending on the time of the day.

The area is a hot spot for scuba diving aficionados and features a succession of limestone arches that have been carved out by erosion. 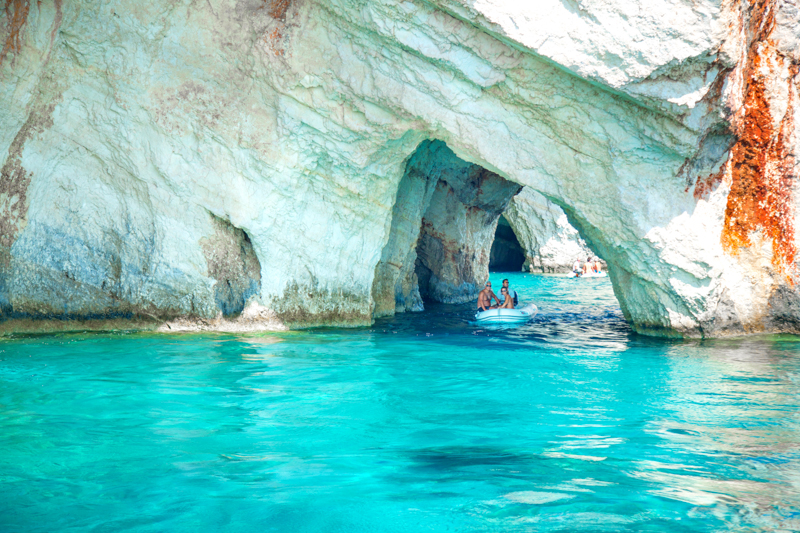 Small boats travel through its arches where you can admire stalactites hanging like chandeliers from the top of the cave. Big boats hover behind, admiring its beauty from a distance, pausing so guests can plunge into the refreshing waters.

And if you are up for an adventure, you can walk down to the sea by way of steps, accessible from the mil near Skinari Cape.

Spend some time on the beaches around Laganas Bay to see one of the oldest lifeforms on earth up close – the endangered Caretta-Caretta turtle. These are the largest hard-shelled turtles in the world and they migrate to these beaches to mate and lay their eggs.

The best time to spot these is during the summer months in June, July and August. You can join the Sea Turtle Protection Society of Greece at dawn each morning to get a chance to see their eggs hatch. This is an incredible sight, as only one out of every 1,000 hatchlings make it to adulthood.

Other endangered creatures found on and around the island include the Mediterranean monk seal (monachus monachus). 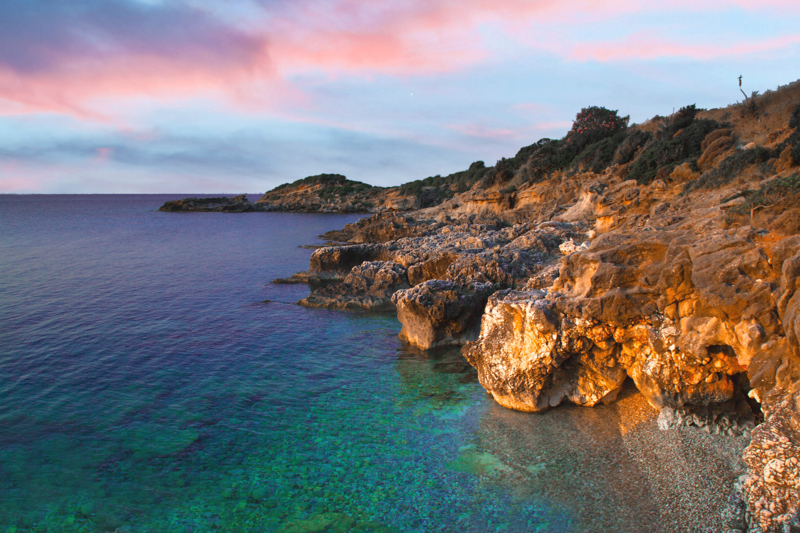 Do you have a favourite Greek Island? Share them in the comments below.

Ready to start planning your getaway?